You are here: Home / Archives for Science Fiction and Fantasy 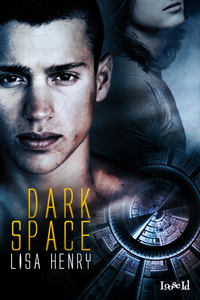 Fighting over whose god is the real god? When the aliens turn up, you’ll see just how ludicrous it is to believe in one god who invested himself in one particular group of people on one tiny corner of one insignificant planet, thousands of years ago. END_OF_DOCUMENT_TOKEN_TO_BE_REPLACED

We’re starting something new here on the blog, we’re featuring science fiction and fantasy with LGBT characters. There’s a lot of it out there, but for some reason, it’s not all that easy to find. I am a huge fan of both sci-fi and fantasy, and am very happy to kick off the first post featuring this sub-genre with an excerpt from In Liam’s Wake, the first book of Ashlyn Forge‘s new Toys and Soldiers Series. Enjoy!

For eight years, Liam has been trapped underground in The Colony—a sanctuary so determined to stay hidden it forbids anyone from leaving once they’ve entered. His only hope of returning home rests on his best friend Riley who, on the eve of their escape, slipped into a coma.

Despite staggering debt, vengeful mutants and bounty hunters, Liam continues a seemingly never-ending quest for a cure to end Riley’s unnatural five-year sleep. Every night, Liam stares at the listless man who not only holds his escape, but his heart. The suffering can end, however; Liam must only forsake all hope of ever returning home again, abandon Riley to his fate, and wholeheartedly serve as a soldier for The Colony—the very people he’s trying to escape.

Live the life within his reach, or continue chasing the one just beyond his grasp? He need only submit. 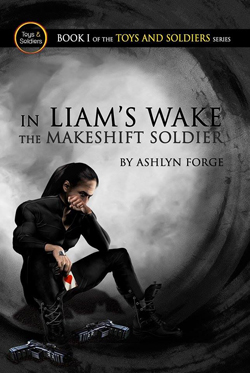 “Opponent, do you accept this challenge?” an unfamiliar voice called out.

With a soft groan, Liam pulled himself into a sitting position. His mouth tasted dry and foul, but he could speak.

Liam rubbed his brow and then his eyes, taking stock of his surroundings. He was in a tunnel.

A fight? How’d I end up in a fight? Where the hell am I, anyway?

There were thin-framed metal bleachers behind him, and directly before him sat his opponent.

For a brief moment, Liam wondered if the drugs were causing him to hallucinate. He wasn’t sure he’d taken them, though, so he considered the possibility that he was succumbing to his ailment. Whatever the reason, he now sat some distance away from something he’d thought was a myth. END_OF_DOCUMENT_TOKEN_TO_BE_REPLACED

I’ve written several books, only two of which are published so far, and numerous short stories. I loved writing each and every story, from novel to flash fiction, for different reasons. Being forced to pick a favourite feels horribly unfair since they’re all dear to me, but since a favourite is what this post is all about I’ll have to choose Obscura Burning. END_OF_DOCUMENT_TOKEN_TO_BE_REPLACED

But let me back up a sec. My introduction to the gay community was when my older brother came out to me. I was 12 and didn’t really understand the whole socio-cultural implication of “being gay” because one, I was 12, and two, it was the 1970s so this was pre-AIDS. Being gay was not commonly mentioned on television or in pop culture so I wasn’t exposed to it in my sheltered suburban childhood. It was shocking news that Uhura and Kirk had kissed on Star Trek (I was appalled; isn’t that sexual harassment? He was her boss!) END_OF_DOCUMENT_TOKEN_TO_BE_REPLACED

I’m talking with Nessa L. Warin today. Nessa has 4 books under her belt, works with Harmony Ink promoting positive books for LGBT Youth and has a new book out, To Dream, Perchance to Live.

B: Before we get into your book, let’s talk a little about what you do at Harmony Ink. The press is set up to promote books with positive role models for LGBT Youth, what do you do there to help foster the growth and reach your audience? END_OF_DOCUMENT_TOKEN_TO_BE_REPLACED