You are here: Home / Author Interviews / Nessa L Warin on LGBT YA books and her new release 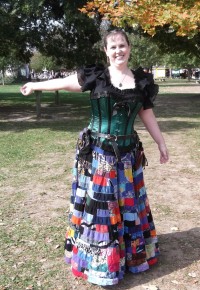 I’m talking with Nessa L. Warin today. Nessa has 4 books under her belt, works with Harmony Ink promoting positive books for LGBT Youth and has a new book out, To Dream, Perchance to Live.

B: Before we get into your book, let’s talk a little about what you do at Harmony Ink. The press is set up to promote books with positive role models for LGBT Youth, what do you do there to help foster the growth and reach your audience?

NW: I’m the media coordinator, which means I run the Facebook page and the Twitter account. I also send out our monthly newsletter (sign up here in the sidebar). Right now it just reports on new releases and reviews we’ve gotten, but we’re working on adding more features and we’ll have some newsletter-exclusive features in an issue or two. I’m also working on setting up a GoodReads group for readers and authors to interact. That’s still a work-in-progress, so there isn’t anything there yet, but I hope to have some content in the next few weeks.

My job right now is a lot of trying to figure out how to reach people. We’re a new press, though we’re an imprint of Dreamspinner Press, and not a lot of people know about us yet. We do have some exciting stuff planned over the next couple months, though, so anyone who’s interested in winning things should keep an eye out.

B: You told me one of the goals was to get these books into local and school libraries to reach LGBTQ kids. How is that being received?

NW: The librarians and teachers I’ve talked to have all been very excited about it. They get requests for LGBT YA books, so they’re thrilled we can provide them. I had the opportunity to talk to several librarians while at Dragon*Con this year and everyone agreed on the importance of making these books available to teenagers and that it’s a challenge librarians are facing. We created Harmony Ink as an imprint of Dreamspinner because books published under the Dreamspinner label couldn’t go into the young adult sections of libraries or into schools, even if the book itself is completely appropriate because of other books Dreamspinner publishes.

Creating Harmony Ink was the first step in getting past that—all of Harmony Inks books are Young Adult and appropriate for schools and young adult sections of libraries—but there are still issues. Unfortunately, bigotry does still exist and that can make it difficult. I know one teacher who purchases LGBTQ books for her classroom library because the school librarian can’t or won’t stock them in the library. I know some librarians have difficulty getting approval to buy LGBTQ books because of their funding sources or leadership. Overall, though, I think the reception has been generally positive.

B: As well as positive role models, how is Harmony Ink addressing some of the challenges faced by these same youth?

NW: Right now, our focus is getting the books out there. We look for books that have positive protagonists and show character growth though the course of the book. That doesn’t mean we shy away from books that have bad things happen. As much as we wish they weren’t, bad things are a part of life, and our books show that. What we want though is characters that move on from the bad things that happen to them and learn and grow because of it. We hope this can show teens that no matter what they’re going through, it doesn’t mean they should give up.

Outside of the books, we’re still tossing ideas around. There is a lot we’d love to do to help LGBTQ teens, but it’s a challenge at the moment because we’re so new. Right now, we need to get our name out and our books out so we’re in a position where we can do more. Once we’re there, though, you’ll see some really exciting non-book related stuff from us too.

B: Let’s talk a little about the new book, To Dream, Perchance to Live. What’s it about? 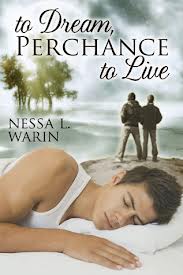 NW: To Dream, Perchance to Live takes place in a world where there are people known as Dreamers who can enter and manipulate other people’s dreams. They’re known in the world and have jobs using their abilities. There are also psychic bonds that form between people in relationships and bonding is equivalent to getting married. One of the Dreamers, a guy named Wyatt, has been illegally owned by a corporation since he was 16, kept asleep and forced to participate in corporate espionage for them. Something goes wrong with one of his assignments, the person whose dreams he’s in dies, and he’s left for dead. He’s found by Aidan, who takes him in, nurses him back to health with the help of some friends, and tries to figure out what happened to him. When he wakes up, they start to bond, and the story revolves around finding the people who had Wyatt and keeping him safe from them while Wyatt learns to function in the waking world again and Aidan and Wyatt fall in love.

There are a lot of crazy twists and turns in the story, because there are two plot lines: Wyatt and Aidan’s relationship as they learn to live together and fall in love, and the corporation who had Wyatt trying to find him and get him back. It sort of worked out that as one thing gets smoother the other gets more complicated. I don’t want to give too much away, but it reaches a point where things are really good on one front and really bad on the other and they end up having their relationship tested a lot more than they thought it would be.

I had a lot of fun with this story because I really got to explore my passion for world building. The world Wyatt and Aidan live in is very similar to ours in many ways, but it’s also subtly different and exploring that was both the most exciting and most challenging part of writing this story for me. It’s not a straight up fantasy world or a futuristic science fiction world, so I couldn’t make everything drastically different, but at the same time, it’s not our world either, and I needed to show that with more than just the Dreamers and bonds. I’m really happy with how it turned out, and I hope my readers are too.

B: This sounds interesting, (see the  blurb below). Thanks for stopping by Nessa.

Wyatt Mettler is a Dreamer. While asleep, he can insert himself into people’s dreams and manipulate them, watch their fantasies, steal their secrets, and change their minds—all without their knowledge. For eleven years he’s been Lumoinnovations’ secret weapon, illegally enslaved, all in the name of the bottom line. But when an assignment goes awry and results in the death of the subject, Wyatt’s handlers leave him for dead.

When Aidan Donecoff stumbles across Wyatt’s unconscious body in an alley, he is struggling to get over a failed relationship and has almost given up hope of forging a true Bond with anyone. He has known Dreamers in the past, but none like Wyatt. When Wyatt truly wakes up for the first time since he was a child, it is Aidan who helps him find his way in the world. They grow close as Wyatt gains confidence, and life is good… until Wyatt’s handlers discover he is still alive and decide they want him back.

You can find Nessa on her website, Facebook, Twitter, and Goodreads; and you can find her books on Amazon, Dreamspinner Press, All Romance eBooks, and Barnes & Noble.