You are here: Home / Gay Romance Novels / When The Aliens Come

Fighting over whose god is the real god? When the aliens turn up, you’ll see just how ludicrous it is to believe in one god who invested himself in one particular group of people on one tiny corner of one insignificant planet, thousands of years ago.

The aliens didn’t have to bring us the answers. They only had to bring us perspective. It was the perfect plan.

I said I was nine, right?

So then I grew up. (More or less.) I experienced more of the world, and more of humanity, and that experience made me cynical. The Ancient Romans had a saying: homo homini lupus est. Man is a wolf to man. The saying’s been around for several millennia now, and it still holds true.

When I first sat down to write Dark Space, I thought back to my hope that the aliens would come, and humanity would change. But would it really be for the better? So I gave humanity an enemy — the Faceless — who have pretty much destroyed all of the planet’s major cities and killed hundreds of millions of people. Dark Space opens three generations after this, when Brady Garrett, a conscripted recruit on a space station designed to defend the Earth from another attack, comes into contact with Cam —the only human being ever taken prisoner by the Faceless, and then returned.

Brady is a reffo. This is Australian pejorative slang I borrowed from the 1950s, meaning refugee. Brady was born in what was once a refugee camp, and is now a town called Kopa. As Brady himself says, Kopa “used to be just one more refugee camp along the line until people got tired of walking and put some roots down in the dirt there.” The reffos are not welcome in the surviving cities, and have nowhere else to go. 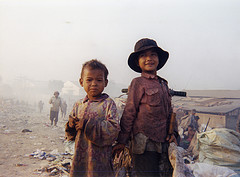 And I wish this part was science fiction.

And when Brady talks about digging through the rubbish tip to find something to eat, I was thinking of places like Siem Reap in Cambodia, where people are born, live and die on rubbish tips.In Kenya, 300 000 Somali people have lived in the Dadaab refuge camps for over twenty years. In Thailand, 130 000 Burmese refugees have resided in camps for almost thirty years. The Shatila refugee camp, in Lebanon, is home to over 12 000 Palestinian refugees. It was opened in 1949.

Not science fiction at all.

Neither is the homophobia that Brady and Cam face. Because I don’t want to give you a world where there have been magic fixes and the military is suddenly open and accepting of a same sex relationship. I want to give you, despite the aliens and the space stations and the destruction of most of the planet, a world that you still recognise.

In the world of Dark Space, the aliens didn’t make things better. Humanity didn’t join together against adversity like Londoners famously did during the Blitz. Things aren’t better because humanity has suddenly faced up to the fact that everything is so precarious. For a lot of people, things are much, much worse.

I want you to be horrified, and sad, and angry that people call Brady a dirty reffo, and a faggot. Because in the real world, people face hatred like that every day, and it’s good to be outraged about it. It’s necessary to be outraged. But I also want you to know that, for Brady and Cam at least, love wins out. That’s the consolation that fiction can offer, when all too often reality drops the ball.

We talk about world building all the time when it comes to science fiction. But really, the world building writers do, I think, is just enough to distract you from the fact that we’re actually talking about our world. About us. Don’t be distracted by the space battles and ’sploshions. Those are just window dressing.

I think that’s what science fiction is best at. Science fiction—all fiction, I suppose— is a mirror through which we can view ourselves from a safe distance.

We can only do better if we recognise our failings now. Because there are some great things about humanity — tenacity, decency, love, and the drive to do what’s right — that can be greater than our worst characteristics. We see examples everyday. Out of every tragedy there always comes hope. Just enough hope to make even cynics like myself believe that maybe, one day, we’ll get it right. And in science fiction, just like in the real world, the one thing we can always do is hope for a better tomorrow.

Lisa lives in tropical North Queensland, Australia. She doesn’t know why, because she hates the heat, but she suspects she’s too lazy to move. She spends half her time slaving away as a government minion, and the other half plotting her escape.

She attended university at sixteen, not because she was a child prodigy or anything, but because of a mix-up between international school systems early in life. She studied History and English, neither of them very thoroughly.

She shares her house with too many cats, a dog, a green tree frog that swims in the toilet, and as many possums as can break in every night. This is not how she imagined life as a grown-up.

Dark Space is available from Amazon in Kindle or paperback edition.