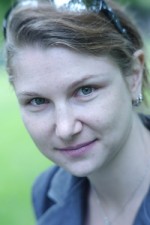 I’ve written several books, only two of which are published so far, and numerous short stories. I loved writing each and every story, from novel to flash fiction, for different reasons. Being forced to pick a favourite feels horribly unfair since they’re all dear to me, but since a favourite is what this post is all about I’ll have to choose Obscura Burning. 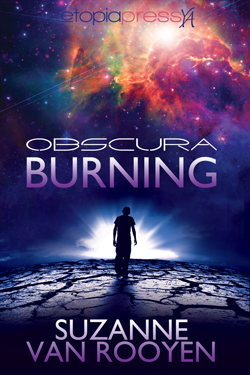 The world’s going to end in fire…and it’s all Kyle’s fault.

Kyle Wolfe’s world is about to crash and burn. Just weeks away from graduation, a fire kills Kyle’s two best friends and leaves him permanently scarred. A fire that Kyle accidentally set the night he cheated on his boyfriend Danny with their female friend, Shira. That same day, a strange new planet, Obscura, appears in the sky. And suddenly Kyle’s friends aren’t all that dead anymore. Each time Kyle goes to sleep, he awakens to two different realities. In one, his boyfriend Danny is still alive, but Shira is dead. In the other, it’s Shira who’s alive…and now they’re friends with benefits. Shifting between realities is slowly killing him, and he’s not the only one dying. The world is dying with him. He’s pretty sure Obscura has something to do with it, but with his parents’ marriage imploding and realities shifting each time he closes his eyes, Kyle has problems enough without being the one in charge of saving the world…

It’s easier to talk about why Obscura Burning (OB) is my favourite work if I do it in list format, so here goes.

Obscura Burning has, however, cast a shadow, one from which I’m struggling to emerge as a writer and get back to my more action orientated futuristic science fiction. I keep getting drawn back to those thirsty, lonely mesas, to Kyle’s world where the fabric of reality is starting to fray. I’ve finally given into the pull and my brand new WIP – tentatively titled Postcards from Mars – is set just across the border, where a troubled young man is about to find more than just a meteorite in the Texas dust.

Closing my eyes, I imagine New Mexico burning, can almost smell it, the pungent pine, fireball mesquite, and smoldering cacti. I should be worried about the damage the UV’s doing to my scars, but after tonight, none of that will matter.

Just when you think it can’t possibly get any hotter or the mercury will explode, the temperature rises just a few more degrees. Today, Coyote’s Luck lies in a simmering mirage, hotter than any hell imaginable.

The crush of mesquite huddling between the tombstones offers little respite from the sun. Sticking to the dappled shade, I thread my way toward Danny’s grave. I’m not alone.

She looks like a ghost with the white sundress fanning around her legs, her long black hair teased by the warm breeze. For a moment, I think it’s one of the ch’iindi made flesh, until she turns at the sound of my step.

Gabriela, her face a teary-eyed frown. She folds her arms and returns her gaze to the grave. When did she get so thin? She was always so voluptuous, a shorter, less saggy version of her mother. Now she looks more like a sixteen-year-old kid, barely there in layers of cotton.

We stand in silence, both just staring at the grave. The rosaries dangle over the stone, tied in knots around the stems of already dead flowers. There’s a white and blue beaded one, the one that was attached to Danny’s bed, the one he’d kiss at night before going to sleep.

“I miss him so much,” Gabriela says eventually.

“I blame you, you know.” She casts me a sidelong glance.

She nods and sniffs and fingers one of the blooms turned brown by the heat.

“Dead, all of it.” She tears the petals from the stalk. “Little Maria, now Daniel.” She turns her dark eyes on me, searching for something I wish I could give her.

“This is killing my parents. Daniel was their only son. They’ll never have more children. Once, I had a brother. Now I’m alone. Sister to dead siblings.”

That’s the most Gabriela’s ever said, to me at least. I’m stunned into uncomfortable silence. There’s nothing I can say that’ll make it right. But tonight, maybe there’ll be something I can do.

“I wish I could make it right.” My words sound so pathetic.

She harrumphs and digs her sandaled toe into the dirt. “Nothing can make Daniel dying right.”

“I’m sorry.” There is nothing else I can say without trying to explain the whole confusing story and Gabriela’s not the type to believe in rifts in reality.

“Tell Daniel you’re sorry. He’s the one who died because of you.” She takes a deliberate step away from me, crosses herself, offering prayers in Spanish to the ether.

“I loved him, you know.” Maybe I am to blame, but she makes it sound like I don’t give a crap that he’s dead.

“Obviously not enough.” She throws Daniel’s words in my face. They cut me to the bone. She leaves, looking back only once, her gaze on her family’s graves, completely dismissing my existence.

Not wanting to linger, I loosen the knots in the rosary, reducing the shriveled petals that were once roses to dust. I slip the beads over my head, and tuck the crucifix into my shirt.

“Good-bye, Danny,” I whisper to the dirt and stone, to the bones disintegrating below. The rosary weighs me down; the metal cross jabs the puckered flesh of my chest with every step, never letting me forget why it’s there.

Suzanne is a freelance writer and author from South Africa. She currently lives in Finland and finds the cold, dark forests nothing if not inspiring. Suzanne is the author of the cyberpunk novel Dragon’s Teeth (Divertir), the YA science fiction novel Obscura Burning (Etopia) and has had several short stories published by Golden Visions Magazine, Space and Time and Niteblade. Her non-fiction articles on travel, music and other topics can be found scattered throughout the Internet. Although she has a Master’s degree in music, Suzanne prefers conjuring strange worlds and creating quirky characters. When not writing you can find her teaching dance to ninth graders or playing in the snow with her shiba inu.