You are here: Home / Book Excerpts / How I Accidentally Fell Into Writing

Welcome John T. Fuller to the blog. John has the distinction to be the first author we’re bringing to you this year for the Hidden Gems blog series. In a nutshell, this series of posts is about helping you find books that you may not have found, but that others have raved about.  They come from all facets of LGBTQ lit, so if you know of a book that you think needs to be spotlighted, let us know. I hope you’ll enjoy the blog series! Now, everyone say welcome to John. ~B 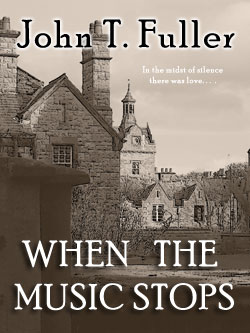 When Brandon approached me and asked if I’d like to take part in his 2014 guest blog theme of ‘Hidden Gems’ I was very honoured and incredibly surprised to be contacted by such a prolific and respected author. Just as surprised, in fact, as I’ve been at how my debut (and currently only!) novella When the Music Stops has been received by readers.

You see, I never really intended it to be published. I’ve written on and off as a hobby for most of my adult life, everything from erotica to horror, historical to sci-fi, but none of it ever saw the light of day – in fact a lot of it never even got finished. It was always just a hobby to me, a nice creative outlet when I came home from the (depressingly factual) desk-job. When I wrote When the Music Stops it was the longest piece I’d written to date and I wasn’t thinking about an audience or what readers might think – possibly this was a good thing, as I’d perhaps not have tackled such an emotive and divisive subject if I’d been worried about how it would be received.

As a lover of history I’ve always been fascinated by institutional history – factories, prisons, hospitals and mental health facilities – and the story really just came to me. I think it was possibly influenced quite a bit by Sarah Waters’ ‘Fingersmith’, with obvious differences. It started out as a series of vignettes, which I slowly began to piece together as I became more fascinated by the what-ifs of two men in that situation and the questions it raised: is their relationship acceptable? Could it ever be? Does the filter of history make it more so? Is it even remotely unacceptable, considering that Mr White may not be ‘mad’ at all? Because I was writing it for myself, it just flowed and I took some major ‘Hollywood’ liberties with historical accuracy (even writing it I was aware that procedures such as transorbital lobotomy weren’t widely in use until well into the 20th century) and that bothers me a little now, but I’m not sure if it should. I wonder if people have enjoyed the story and been so kind about it because the fact that I was writing for my own enjoyment shows through. Maybe, as Mr White dances like there’s nobody watching, authors should write like there’s nobody reading – at least, maybe this one should!

In the end, I published ‘When the Music Stops’ to Lulu, at the encouragement of a friend – Richard Rider, the author of the absolutely stellar ‘Stockholm Syndrome’ series. I’d read all three ‘Stockholm Syndrome’ books and been completely enthralled by them: they’re certainly enough to make any author feel a little inadequate by comparison. But I was persuaded that I had nothing to lose – it’s easy to self-publish, if people hated it I could take it down – but I was blown away by the wonderful response I received after Richard kindly wrote an initial review for me. The readers picked up on just the themes I’d had such fun exploring – it seems I’m not the only one interested in those themes after all, and that’s a great feeling.

Since then, the day job has taken over once again and I’ve not been writing as much, but I have been writing. Several stories have been penned and then shelved and I’m kicking around a few ideas for a novel, but the thought of anyone reading it has me quite self-conscious. So, I think it’s back to the days of writing like nobody’s reading again – and hoping that something that people will enjoy eventually comes of it!

When a handsome young mute man is admitted to Link Hill Insane Asylum, Dr Daniel Archer’s world is turned upside down. Whilst Dr. Archer battles his inner demons, his superiors begin to suspect that the doctor’s interest in his patient may be a little more than merely professional. But who is the mysterious Mr. White, is he really as unknowing as he first appears to be and can love possibly triumph even against such stacked odds?

Once a year the asylum hosts a charity patrons’ ball in the magnificent surroundings of the spring-floored hospital ball room. Some of the residents are taught to dance a simple waltz in order to showcase their progress, and they totter around the floor two-by-two (men dancing with men, women with women of course, to avoid any inappropriate incident) in a grotesque parody of civility whilst the society matrons simper and applaud.

They tried to teach White, but he could not or would not learn the correct footsteps, instead dancing his own wild circles, spinning and exuberant. They bring him along anyway, because he is pleasing to look at – especially groomed and dressed in a borrowed suit. He looks almost normal. Almost, Archer thinks, because no normal man shines with that light from within. The doctor steals glances all night, watches him sitting dutifully silent, observing the gathering around him. And the doctor feels a vague kind of envy that he did not have a hand in preparing White for the night, dressing him so smartly (Archer fidgets in his own formal attire, white tie and waistcoat and gloves, his woolen tailcoat stifling) and brushing his hair so it shines, tied back with a black ribbon that’s slipping further down unheeded throughout the night as he twists to watch people pass. Because if Archer had had a hand in dressing him, he would have put him in a blue cravat instead of brown, blue to bring out the startling colour of his eyes…

This patient is still attention-grabbing. The society ladies are charmed and saddened by his sorrowful plight – moved to donate funds to the hospital – they whisper behind their fans such a shame in tones of morbid fascination and Doctor Archer is surprised by a spike of hatred and outrage that they dare to judge one who is all so obviously their moral better.”

John T. Fuller hails from the UK, working with computers by day and writing by night. His other interests include history, walking and real ale. ‘When the Music Stops’ is his first published work.