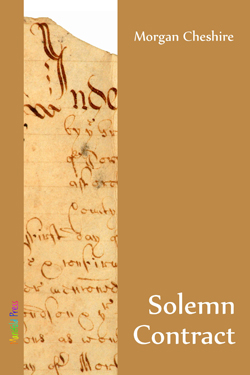 I had no idea about his background, when or where he lived, or anything about his character – was he good or was he not so good – so I ignored him and wrote about something else instead.  However, he kept bothering me so much I decided to work on his character.  He acquired a name, William Middleton; because of his work he was physically strong and I decided he was a good guy, fair-minded and intelligent.  To make William’s life complete I now needed another character with as strong a personality but a different set of skills and so Jem Bradley came into being – teacher and an amateur botanist. A complete contrast to William, Jem was slightly built with brown hair tending towards auburn.

Their story needed a setting and having always been fascinated by the early settlements of New England, a result of reading/watching The Last of the Mohicans and other films when young,I chose New Hampshire in 1720; this had all the adventure of frontier living and some of the benefits of civilization; books, scientific research etc. as well as the collision between the realities of frontier life and the habits of thought brought by settlers from England. I enjoy researching history and Colonial America gave me plenty of material.

The story begins when, in order to pay debts owed by his brother-in-law the only way to raise money is for Jem to hire himself out as an indentured servant for five years. His indenture is taken up by a farmer and at first everything is fine, Jem and the farmer, Wallace, become friends. However, a local land-owner holds a mortgage on the farm and uses this as a lever to force Wallace to hand over Jem’s indenture papers.

Tanner expects Jem to warm his bed and when Jem refuses he is beaten but blacksmith William Middleton effects a timely rescue. Thrown together by circumstances – the only place Jem can be safe is with Will – the two men form a relationship that is sometimes bewildering to both of them. While Will is trying to find a way to get Jem’s indenture papers from Tanner their friendship is tested to its limits by their own differences in temperament, accusations of immorality and murder levelled against Jem. Dealing with these problems brings them close but the relationship between them is not an easy one as each man comes to terms with his feelings for the other – but there is, ultimately, a happy ending.

I wrote their story for the same reason as everything I write – to find out.  What was life like in New Hampshire in 1720, how difficult was it to be homosexual at that time, and could two very different men find happiness together.  That is the essence of why I write, to sort out my characters’ lives for them, and also with them because sometimes they have decided views on what should happen in the story.

I have written stories almost as long as I have been able to write.  Being unhappy with the original I once re-wrote the end of Charles Dickens ‘A Tale of Two Cities’, where Sidney Carton is rescued by The Scarlet Pimpernel and retires from public life to live happily in the country with one of Sir Percy Blakeney’s crew – I just like interfering!

I am extremely fortunate to have Fiona Pickles from Manifold Press as my editor and what I write is immeasurably improved by her insight and suggestions. I am working on a new book at the moment but due to an extremely busy lifestyle I cannot always fit in the amount of writing time that I would like, and I am slow anyway, the plot developing as the work progresses (despite a lot of planning in the early stages) so it will not be published until the summer of 2015.

I am a resident of the north-west of England and have had a lifelong interest in botany and ecology, a few years ago I took up genealogy and enjoy finding out about where my family came from. I enjoy patch-work and quilting, and gardening when time permits.  I am grandmother of four boys and two girls who keep me busy. I have been creating and sharing fiction for more than thirty years, but only recently ventured into the realms of professional publication.