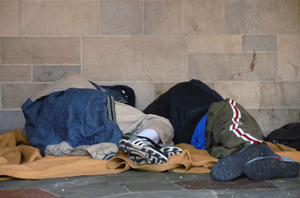 Assumption: I never see them, those numbers can’t be true.

Fact: Most people are unaware a youth is homeless because they try to blend in. This is done for safety reasons and self-esteem. All local and national surveys show homelessness among LGBTQ youth to be a growing problem, especially as kids come out at younger ages.

Assumption: Gay youth are on the street because of drug abuse, or they’re hanging with the wrong crowd. They’re lazy.

Fact: 70% of homeless youth have been physically, sexually or emotionally abused.  60% were forced from their homes because of their sexual orientation. They feel safer on the streets than than do in home, or in school. Many have outgrown foster care and have no other place to go.

Assumption: Homelessness is their choice. They could stay home.

Fact: Most homeless youth leave their families because of abuse, neglect and violence not because they choose to, but because they must go.

Fact: If LGBT kids are not reached within the first 48 hours after they hit the street they often turn to crime, the sex trade, or drug use to survive. Many are arrested for ‘status crimes’ which include loitering, sleeping in public, or trespassing. These are labeled status crimes because they are things which are impossible to avoid doing if you have no place to live.

Fact: There is no safety net. There are a growing number of organizations aimed specifically at LGBT youth, but they cannot meet the need. Many homeless organizations cannot take underage youth. Kids under the age of eighteen are placed back with their abusive family or dumped into a hostile foster care system by law. Underage LGBT kids usually avoid authorities and outreach organizations because of this. There are currently no federal programs specifically designed to meet the needs of LGBTQ homeless youth.

Assumption: Living on the street gives them the freedom they want. It’s kewl!

Fact: 6 homeless LGBT kids will die on the street today. Suicide attempts are higher for LGBT homeless kids (62%) than their straight peers (29%). That’s how cool it is.

Assumption: Child welfare systems protect them. They have it better than homeless adults.

Fact: Over 75% of LGBT teens have to be removed or run from foster placement because of conflicts and discrimination over sexual orientation.  Less than 5% of the $4.2 billion federal budget for homelessness is allocated for youth.

Assumption: It’s cheaper to lock them up.

Fact: It takes approximately $6000 to keep an LGBT kid out of the criminal justice system and in a safe environment. It costs $53,000 to keep them incarcerated in youth detention.  And, being gay and homeless should not be a crime, regardless of age.

Assumption: The problem is so big I can’t possibly make a difference.

Fact: It only takes one person to change the life of one homeless LGBT kid. Just one. You can get involved with a national organization or find something closer to home and make a difference in your own community. Here’s a growing list of LGBT Youth Organizations.