You are here: Home / Book Excerpts / Exclusive Excerpt from Guardians of the Pattern: Psi Hunter 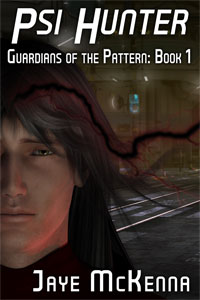 Each novel in the five-book series features sci fi action and adventure, and a romance for a different couple. The first novel in the series, Psi Hunter, will be available in March of 2014.

Pat Cottrell hesitated outside his supervisor’s door, torn between meekly accepting whatever new pronouncement Iverson was about to hand down, and tearing a verbal strip out of the man. Most of the investigations he’d worked on during his career as a psi hunter had at least started out with him feeling like he was on top of things. This one had gone to hell before he’d even left the planet.

He took a deep breath and let it out, willing the taut muscles in his shoulders to relax. It didn’t help. Meek acceptance wasn’t going to win this time. Pat pushed open the door and stared his boss down. “You can’t possibly be serious about this,” he said. “Alek and I have worked together for four years. We know each other’s strengths and weaknesses, we can anticipate each other’s moves. You’re already pushing it, not giving me any time to study the case before I ship out, but you cannot pair me up with a total stranger and expect to have a fully functional psi hunter team.”

Neil Iverson shifted his long, lanky frame to lean back in his chair. He returned Pat’s glare with a slight frown. “With Alek on emergency leave, I’m out of options. This investigation is too high-priority to scrub, and there isn’t another team available.”

“So send me alone. I don’t need some stranger tagging along and getting in my way. I’m perfectly capable of conducting a murder investigation on my own. And if I have any problems, I can get backup from the FedSec office in Riga.”

“Psionic backup?” Neil regarded him intently. “Did you even read the briefing? You’re investigating a string of gang-related deaths in downside Riga. Deaths that may well have been caused by a psion powerful enough to kill. Sending you in alone would be gross negligence on my part. No, you’ll have a partner.” Neil gestured towards the conference table on the other side of the room. “And give me some credit; I’m hardly sending you out with a total stranger.”

Pat turned and froze as he caught sight of the man sitting at the conference table. His first look at Kyn Valdari in three years went right to his gut. Kyn had always looked damn good, and that hadn’t changed. The shaggy, honey-blond hair was a little longer than Pat remembered it, and the day’s worth of stubble gave Kyn a roguish look that made Pat’s heart beat faster. Arctic blue eyes locked onto Pat’s face, then slid away to focus on Neil.

Pat bit into his cheek to stop himself from reacting. He managed to keep his expression impassive, but he could do nothing about the thrill that flashed through him at the thought of working with Kyn. A thrill that dropped to the bottom of his stomach and lay there burning as the reality of the situation sank in.

He and Kyn had been close friends since they were teenagers. One night of passion had put an end to that, and Pat hadn’t seen Kyn since.

He glanced around the room, searching for somewhere to put his eyes other than on Neil or Kyn. Neil’s office, however, was as bland and unrevealing as his face — white walls, gray blinds, no artwork or personal touches.

Nothing to distract Pat from the boss himself — except the mess in his own head.

Pat’s mind was already working its way through memories he’d thought safely buried as he tried to figure out what the hell he was supposed to say. It took a few moments for him to realize that Neil had spoken to him. “Hmm? What?”

“I asked if working with Kyn was going to be a problem.”

He bit back his gut response, that of course it was going to be a problem, and struggled to give the idea a moment’s objective thought. Considering their destination and the nature of the assignment, Kyn was an excellent choice. Kyn had done a four-year stint in the Federation’s Space Fleet, knew weapons better than most of the agents Pat had worked with, and was the only psion alive who was powerful enough to kill with his mind alone.

Pat glanced at Kyn and let out a sigh. “Professionally, no.” If he couldn’t have Alek watching his back, Kyn was the best he could ask for. And if they were going to come face to face with a killer psion, he had to admit that Kyn was a better choice than Alek.

Neil arched an eyebrow. “And personally?”

Facing the Mirror is a free novella in the Guardians of the Pattern universe and features several characters who make appearances throughout the series. It is available from Apple, Barnes and Noble, Kobo, Smashwords, and Sony.

Human Frailties, Human Strengths is a novel-length M/M fantasy romance, and is available from Amazon, Apple, Barnes and Noble, Kobo, Smashwords, and Sony.

I was born in Britain, and dragged across the Pond before I was old enough to really make a case for staying there. I’ve been telling stories since I was four, writing them down since I was nine, and dreaming them forever. I have a Ph.D. in materials engineering, but between the economy, my stunning disregard for authority, and my decision to leave the workforce to raise my kids, I’m now pretty much unemployable. Which is okay with me — it leaves me plenty of time to listen to the guys in my head and get their stories down.

Connect with Jaye on Twitter, her blog, or on Goodreads.