Just thought I’d offer a peek at my rough draft to give you an idea about what Jack and Sid are up to in Season Two of Wicked Men. Feel free to leave your comments below.  ~ B. 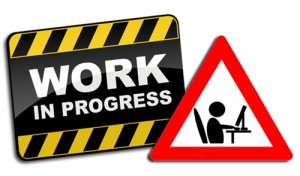 Jack was in Philadelphia when he first caught sight of the tail. He noticed the same man three months later when he was in the Keys, and then a third time in LA. At first, he thought the guy might have been working for Wessman or the Feds, but they would’ve moved in on him long before now.

This tail was too casual. He didn’t seem to mind showing himself now and again, but he never got close enough for Jack to clock his ass and demand information. His presence was meant to be an irritating reminder that someone was keeping tabs.

So Jack wasn’t surprised when he saw the same man standing outside the DC restaurant he was about to have lunch in. This close, Jack could get his hands on him, and they both knew it. But there were too many witnesses and the idiot was counting on Jack not wanting to draw attention to himself. His mistake. Drake and Sweeny were already in place outside to help snatch him up.

“He’s here,” Jack whispered. He grinned and immersed himself in the menu.

“He brought company this time,” Sweeny advised a moment later.

Jack looked up just in time to see Shane step off the sidewalk and make his way across the street toward the restaurant. His jaw clenched. “Stand down.”

“Are you sure?” Drake asked. “You need me inside?”

When Shane opened the restaurant door, Jack met his eyes with a stern but blank face. “What the fuck do you want?” he growled as Shane sat down across from him.

Shane leaned back in his chair, his expression smug. The waiter came over and put another place setting down.

“He’s not staying,” Jack said, shooing the kid away.

The waiter paused, scooped everything up and disappeared.

Shane chuckled. “You don’t seem happy to see me.”

“When people from my past show up unexpectedly, it usually means trouble.”

“You’re still pissed because I played you,” Shane countered.

Jack shook his head. “No, if I was pissed it would be because I didn’t get to exact the retribution your former boss required. He should have died slowly and painfully.”

“Which means we have nothing to talk about,” Jack replied, going back to the menu.

“The old lady wants to talk to you.”

“She asked if you’d come see her willingly.”

Jack met Shane’s eyes. “No.” He took a moment to notice a gay couple at another table holding hands before he went back to the menu.

Jack took a breath. He was quickly losing his appetite, and his patience. “What the fuck does she want?” he finally asked, exasperated. “I’ve got nothing for your people and I’m not interested in working for you.”

“Well, why doesn’t she just set me up again?” Jack asked. “She seemed adept at manipulating everyone the last time.”

“There was a lot more to Ruoho and Croft than you realized. It wasn’t just about retribution. She could’ve had anyone bump those assholes off.”

“Well, why didn’t she?” Jack spat, drawing the attention of the other diners as his voice rose. He picked up his water glass and took a drink, his eyes hard on Shane. “What are you doing here? And why is your idiot following me all over the country?”

Shane’s mouth fell into a straight line. He saw a waiter going by with a coffee pot in hand and motioned at his cup. The man filled it and walked away. “Your boy is about to step into a world of shit. It’s deeper than he realizes.”

Jack brushed the comment away with a flick of his hand. “Rivers is pretty good at taking care of himself. And he’s not my boy.”

“Your old buddy Wessman is involved this time. Or should I say again?” Shane asked. “He wants you, and he knows the best way to get you is through Rivers.”

Jack scoffed, even though he didn’t like the sound of this. “Is that what he thinks?”

“After you came running to the rescue last time? Yeah.” Shane nodded. “He’s going to use Rivers as bait. And if you don’t help him, Rivers is going to end up dead. My boss doesn’t want that to happen, as I’m sure you can understand.” Shane folded his hands on the table and took a breath before reaching for his coffee. “Wessman was billing the federal government upwards of six figures. He’s got connections out the ass, but after that fiasco on the highway…” He took a sip of his coffee, grimaced at the strength of it and reached for the sugar. “Rivers will get hurt.”

“So why doesn’t he come after me directly if he’s got those kinds of resources?”

Shane tilted his head, pursing his lips as he dumped two packets of sugar into his coffee. “Because it’s Wessman.”

Jack let out a long, increasingly pissed-off breath. “How does an asshole like Wessman get contracts like that?”

Jack looked away, disgust written on his face. “Yeah, the contrived fear-mongering we use to make the corporate warmongers more money.”

Shane sat back, took another sip of his coffee and seemed to approve of it this time. He studied Jack for a moment. “You’ve become quite the liberal cynic in your old age.”

“Fucking liberals are just as bad. They couch the story differently, but they’re reaching for the same dollar bills.”

“Politics and money,” Shane agreed, crossing his legs as he leaned further back in his chair. “The story hasn’t changed, just the names of the players. So how about we work together to change things?”

Jack rolled his eyes. “There are plenty of your people working for the same crowd I work against.”

Shane snorted in derision. “You make it sound like you’re doing some good by stealing corporate data. You’re a fucking thief, Jack. The only thing you do to these companies when you steal their secrets is give them another write-off. You enrich yourself just like the CEOs who work there. Only you think you’re holding the moral high ground. That’s bullshit and we both know it. If you really want to change things, then come listen to what the old lady has to say.”

“I tried working for your people once before, it didn’t work out so well.”

“This isn’t Afghanistan, Jack. And you weren’t working for me.”

Jack narrowed his eyes trying to figure out why Shane was trying so hard. “Your group isn’t officially shop, is it?” Jack asked. “A renegade cell?”

Shane stared at him and took another slurp of coffee.

“You’re completely outside,” Jack said, nodding to himself. “Not NSA or Homeland… That means you answer to no one except your boss lady.”

Shane admitted nothing. But then, he didn’t need to either.

Jack continued to nod to himself, confirming his own thoughts. He glanced outside. Drake was idling the van across the street. He brought his eyes back to Shane. “That’s treason as far as the U.S. government is concerned. They’ll put you in a dark hole somewhere and forget you ever existed.”

Shane chuckled. “Treason is a relative term these days and the label usually depends on how deep your pockets are. But you already know that.”

“So… What?” Jack asked, trying to put it all together. “Are you trying to tell me your maiden of honor got a bunch of freelancers together to fight against the oligarchy?” He paused, waiting for an answer but not really expecting one. “Didn’t she grow up in it?” he asked, his eyes boring into Shane’s. He shook his head and scoffed. “How fucking noble of her.”

“Not everyone is an enemy,” Shane countered.

Jack laughed. “You’re right. They’re too busy being puppets. Look around. This city is filled with them.” A sharp-edged silence fell between them.

“Just for the record,” Jack said as he stood. “I’ve already had my vengeance. You can count me out.”

“What about your boyfriend?” Shane asked. “Are you going to let Wessman and the Feds steamroll him?”

“Like I said, Rivers can take care of himself.”

“If Wessman doesn’t kill him first, the Feds will eventually get him.” Shane paused, watching Jack. “Your friends left two ex-FBI agents dead on a public highway. The department isn’t going to forget that. They know he’s connected, they just don’t know how. If they have to, they’ll fabricate a case against him to get the information they want. But you know that too.”

Jack turned away again, his mind ticking over the information as he went toward the door. The waiter stepped in front of him as if he could stop Jack from leaving. Jack moved the kid aside and hooked his thumb over his shoulder. “He’s paying. Include a twenty dollar tip on the bill for yourself.”

Shane switched seats as soon as Jack left so he had a full view of all the exits. He picked up the menu and started looking it over. When the waiter came by, he ordered lunch and pulled his encrypted cellphone out.

“How did it go?” Marion asked.

“Will he be looking after Sid?”

Shane’s eyes flicked to the street outside. Jack and his team were already gone. “He’ll probably be in Atlanta by tomorrow or the next day.”

“And the other problem?” she asked.

“Not yet. I didn’t get into it. He might need a little more motivation.”

“A luxury we don’t have,” she reminded him.

She disconnected and Shane put the phone on the table. For a moment, he wondered if Jack was right in his obstinate determination to avoid working for Ms. Marion. He looked up with a false smile when the waiter came by to refill his coffee.

Jack would be working for Marion whether he knew it or not. The woman had a way of making sure she got her way.

If you don’t know the story yet, grab Season One.