Religion is a problem for me. It always has been. I won’t lie about that. I’ve personally witnessed the very worst it has to offer the lgbt community and no matter how devout, compassionate and understanding a person of faith is, I always take a step back from them. They can be straight or gay. It doesn’t matter. It’s not something I admire about myself, but it is a part of me. I don’t dislike people who hold to their faith, not at all. But my gut reaction is something I struggle with relentlessly. (And as a side note: I do consider faith and religion to be two very separate things.)  So, having come clean on that, I asked author Tim Bairstow to stop by. He is a gay man of faith who writes in the mm genre about these same struggles. I’m sure you’ll find (t)his post and his books intriguing. ~B

The interaction between faith and sexuality in the context of the Christian Church is a subject of enduring fascination for me. Indeed, I think it’s a pretty important ‘front line’ in the on-going battle for equality. Hence, I was delighted when Brandon asked me to explain how faith interacts with sexuality in my fiction – apparently, it’s an unusual take on things.

In the two of my novels dealing with this theme, The Shadow of Your Wings and Cloven Tongues, I thought it was important to take the faith part seriously. It would be too facile just to say that someone’s faith is deluded and set out to expose it as such. Better to accept the fact that faith in God is a deep, genuine and compelling part of someone’s life. That way, it’s possible to explore the internal and external conflicts that happen when this compelling instinct collides with the deepest need of any human: to love and be loved as they are.

“The Shadow of Your Wings” explores three aspects of this collision.

Firstly, the accommodations that people reach in holding a faith that forbids them to act upon their deepest desire for genuine and physical love. Some of this is quite wincingly awful: In “Shadow” there are the tortured, desperate grabs at some sort of release and also the ‘dual personalities’ capable of being, for example, the perfect priest at one time and a sexual predator at another.

Through the character of Jack Lowden, the ageing monk/priest at the centre of the story, I have tried to explore the second theme: What are the consequences of trying to deny oneself physical love? In Jack these are tortured regret and the warped desire to fulfil his now doomed sexual longing through a possessive and obsessive love for the handsome young Felix. It’s a love that springs from a bizarre, strangulated attempt to love fully but only spiritually which ends up teetering on the brink of the abusive.

Jack is a tragic figure, destroyed by demons of his own making, trapped in regret for a past that ought to have been so different, haunted by his own failures and desolate at the prospect of a future without hope of romantic fulfilment. 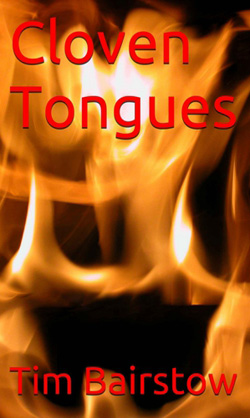 The third idea is that the Christian faith, properly understood, is not antithetical to gay love at all. Contrary to the official teaching of the Church, for the gay man the fulfilment of his faith can and must be found in mutual love for another man: this is his highest calling. In essence, it’s adopting an approach that says: the ‘faith’ is a good thing, it’s the ‘religious practice’ that is harmful. Aelred of Rievaulx, the unofficial patron saint of gay men, wrote the most beautiful description of this love in faith terms in the year 1164: “The two of you, in the sleep of peace, away from the noise of the world, in the embrace of love, in the kiss of unity, with the Holy Spirit flowing over you; to whom you so join and unite yourself, that you mix soul with soul and two become one.”

In “Shadow” this is Felix’s story. Felix is the young man who comes to the Society of the Incarnation presenting the glittering image of the perfect priest-to-be and yet whose journey takes him away from the institutional rules of his faith only to find the truth of his faith in the arms of the beautiful but dangerous Jonas. God is very present in the story but, as Jonas puts it: “not quite what you were expecting, is it?”

“Cloven Tongues” takes a rather different slant on the issue. For sure, there are still the themes of deceit and damage but in this book I wanted to explore ideas around expiation. The dodgy cathedral dean with a skeleton in his closet in the shape of the handsome Oxford academic, Adam Pellon, whom he has hurt deeply in the past, pays a price on a number of levels.

The Dean’s life and his choices both in the past and in the present of the story lead to him losing everything he holds dear … for a while at least. But, deeper than that, they have made him a ‘straw man’. He has become nothing. His only worth is to be found in his necessity to the man who loved him; his only reality is to be found in Adam’s love for him. Beyond that, he has become nothing at all; he has no further value.

Of all the great faiths, Christianity is the one that should most naturally reach out to gay people and embrace them; the whole thing is deeply homo-erotic! Instead, its official position continues to give confidence and authority to those who encourage LGBTQ people to hate and fear what they are. It is a scandal that, in the Twenty First Century, young LGBTQ people can still find it bitterly hard to accept themselves.

The damage caused by this is incalculable. Once again, Aelred of Rievaulx puts it beautifully:

“A man who does not love himself can not possibly love another! For the love he offers his friend must be framed on the kind of love he has for himself”

That’s why I write this stuff. That’s why I think that important things happen when Gay meets God. If anything I write helps in even the tiniest way, I shall be a very, very happy man indeed! 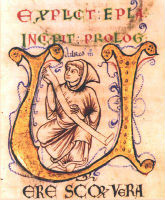 Born and bred in the wilds of West Yorkshire, England; Tim Bairstow studied History at Oxford University and Theology at the University of Leeds in the late eighties and early nineties. He’s been writing stories ever since he could pick up a pen and is passionately interested in documenting the experience of gay people in a manner that goes beyond the all too often very metropolitan, youth based, niche culture that is often the face that the gay community presents to the world. He enjoys exploring the ordinary, everyday lives of gay people in a society that still is equivocal about fully accepting them.

As an historian and a theologian, Tim is currently fascinated by the dynamic between faith and sexuality and, in particular, the consequences rather than the causes of the Christian Church’s current stance on the question of gay rights.

He lives and works in the North West of England with his partner who is a professional musician and broadcaster.  Connect with him on Twitter.