You are here: Home / Gay Fiction / The Public Performances of David Pratt 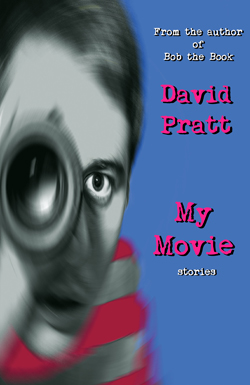 In the end, though I settled on something else. A strange and dark but intriguing fellow who goes by no known name, just a strange and intriguing title. My Movie. It’s not a movie, though. It’s a book. It’s my short story collection, and I think it’s my favorite of all.

My Movie was published in 2012. Its oldest story, “The Addict,” was published exactly twenty years before in Christopher Street, the legendary gay periodical that would cease publication in 1995. I felt I had joined a great tradition, had become a small part of gay history. I published two more stories in Christopher Street, but “The Addict” felt most exciting. I was a real writer now. I had typed away in my apartment in Hell’s Kitchen for almost five years. I had once had this phone conversation: “Mr. Pratt? This is Joe Schmo from Christopher Street magazine.” “Yes?” “Are you the David Pratt who submitted the short story entitled [whatever]?” “Yes?” “I really like how the manuscript looks; can you tell me what kind of printer you used?”

But now someone was calling to say, “We’d like to publish your story.” With that shot of confidence, I began to grow as a writer. I got more calls and letters—from Christopher Street and from The James White Review, Genre, Art & Understanding, and soon submitted to and was accepted by these newfangled “online” thingys, like Blithe House and Velvet Mafia. 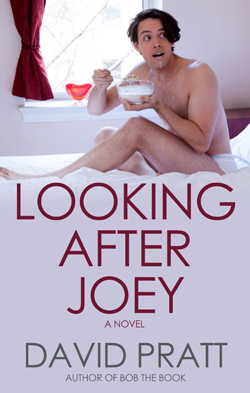 Yet the calls and letters could be far between. Still, I typed away in that eerie apartment, the scene, along with the surrounding Times Square neighborhood, of the unnerving action of “The Addict.” I didn’t hear from readers. I suppose I had few. But I felt a duty to communicate. With my stories I explored twisted, unclean parts of myself. I tried out “crazy” literary devices. A woman finds herself in the fictional land her son and his best friend created for the movies they made as adolescents. A man with AIDS, bleeding copiously from his anus, vanishes in the middle of the night, borne off by a fleet of semi trucks. A young man writes in code, questioning his parents’ love and obsessing over his older brother. I wrote in my own code to explore uncomfortable feelings and memories. On a more realistic note, I recreated my home town, circa 1968, for a story in which a solitary, mannish woman befriends an insecure eleven-year-old boy. Using an incident from my adult life “The Addict” portrays a partnered man cheating with a young guy who smokes crack before sex and who, upon removing his clothes, reveals a badly bruised body.

This is my truest self. Not that my novels are not personal, but I find it hard to make a novel “just for me.” [tweet_dis]Novels are so obviously public performances.[/tweet_dis] It also would have been difficult to make some of my outlandish concepts work over 300 pages, and I would have wasted much time if I had tried to do so and failed. So the story of who I am and who I was is written in My Movie, in what I hope is an entertaining and intriguing code. It is also the story of how I became a writer. I like that the stories are not in chronological order. One is not tempted to track my development too literally; rather, one absorbs my sense of mission, my sense of duty, my struggle to communicate, my small victories over the shame, dislocation, and isolation that had once been, that in some ways remain, indescribable in any medium other than literature. How far did I travel? Hint: The most recent of the stories, written specially for the book, is “Ulmus americana.” Read it after “The Addict,” and you will sense the journey.

My Movie is an intense book. I won’t try to fudge that. Its endings can be happy or heartbreaking or inconclusive. And I think that, no matter what else I publish – even more of those stories – My Movie will remain my favorite.

Thanks again for staying with me.

David Pratt is the author of two novels, “Looking After Joey” (Wilde City) and the Lambda Literary Award-winning “Bob the Book” (Chelsea Station). David’s story collection, “My Movie,” (Chelsea Station) includes both new work and short fiction published in Christopher Street, The James White Review, Velvet Mafia, Lodestar Quarterly and other periodicals. Recent anthology publications include Paul Alan Fahey’s “The Other Man,” Jerry Wheeler’s “The Dirty Diner,” and Jameson Currier’s “With.” David has directed and performed his work for the theater in New York City at the Cornelia Street Cafe, Dixon Place, HERE Arts Center, the Flea and the New York International Fringe Festival. His collaborations with Rogerio M. Pinto include “Os Tres Porquinhos,” “Chapeuzinho Vermelho,” and “Branca de Neve,” Brazilian Portuguese versions of, respectively, “The Three Little Pigs,” “Little Red Riding Hood,” and “Snow White.” In the 1980s, David was the first director of plays by the Canadian playwright John Mighton. David holds an MFA in Creative Writing from the New School. He is currently working on two more novels and a novella for young people.