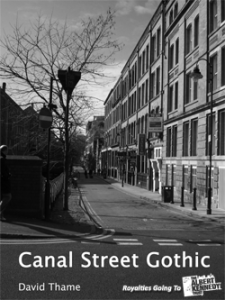 I’ve always had a soft spot for the Albert Kennedy Trust, although my association with them started off for the daftest of reasons. I mean, as a huge fan of Archie Kennedy (from the Hornblower TV series) that name was always going to catch my eye. When I read about Albert, a runaway from a children’s home who fell to his death from the top of a car park in Manchester, having suffered rejection and abuse from society, I decided I had to support the cause of getting GLBT youngsters off the streets and into supportive families.

You can imagine my delight when I was putting together my Christmas present wish list (which is always book heavy) and found Canal Street Gothic, by David Thame, in support of AKT. It was described as a collection of ten stories set in and around Manchester’s gay village revealing the gothic truths beneath the shiny surfaces of the twenty-first century city. I had high hopes, but I’ve had them dashed before, on the harsh reality of blurbs overselling their books. So I was delighted to find this book lived up to expectations. 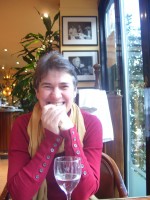 I enjoyed the first story, “Regulars”, so much I immediately re-read it, savoring the characterizations and noticing all the clues to the denouement I should have picked up first time. From then on, I made sure I read slowly and got the most out of each story; it was a real pleasure to read gay fiction which wasn’t just about sex and that had strong story-lines.  Like all anthologies, some of these stories are stronger than others, and the stand outs for me were “The Posh Bit of Stockport” and “The New Union” as well as the aforementioned “Regulars”. Overall, I’d recommend it whole-heartedly, even if it wasn’t in support of charity, so the Albert Kennedy bit just has to be the deal clincher, doesn’t it?

AKT has been adopted by UK Meet as its link charity.

Royalties from the sale of the Canal Street Gothic go to the Albert Kennedy Trust to get homeless LGBT youth off the streets!