You are here: Home / Author Interviews / Sexuality – Not so Black and White

Today, I have asked J. James to the blog. We’re discussing his new book, Denial, Deceit, Discovery, which tells the story of the struggles in the life of Jack Ellis, a catholic man deep in denial about his sexuality.  ~B. 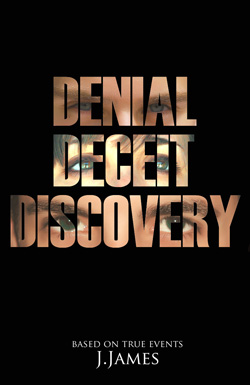 In a recent review So So Gay said your book was ‘a thought provoking and evocative piece of literature that we found very difficult to put down’. Do you think your book is that different from the many other similar books about coming out?

J James:   I think there are a few things that make DDD different. Probably the most obvious is the honesty and frankness of the book. It is all laid our bare for the reader so that they too feel that they are living the life of the protagonist.  The level of emotion in the book is incredible and this pulls the reader in continuously. Readers will love the main character Jack in some parts and then be screaming at him in disbelief at others. The second main difference is the angle from which the coming out is portrayed. Having previously lived a straight life, Jack’s coming out was delayed and prolonged and then ultimately very dramatic when it did finally occur. It means that many people can connect with the story on different levels – gay, straight or just confused. Many of my readers have been women or straight guys because I think the story deals with relationships and the difficulties of growing up and many other wider issues and not just coming out. I think the book is incredibly relatable so such a diverse community of readers.

Many gay men have faced similar situations, what propelled you to write about it and what’s the message?

J James: I have always wanted to be a writer having spent so much time in education teaching children creative writing skills. It was something I intended to do when I retired. However, when applying for an annulment to my marriage I was required to write a paragraph explaining the feelings for men I had the confusion I faced. I found it incredibly difficult to keep it brief and it ended up being six pages long! The catholic priest dealing with the case said it was one of the most moving pieces he had ever read. It was then I realised that there was something in my story that would not only interest others but also help them.  Writing the story was also extremely cathartic for me and provided a lot of opportunity for personal growth and development. There are a few messages in the book. For gay men it is to explain that they are not alone in their confusion or feelings. So many men had read the book and written to me to say how they can relate to so much of the story. It is also a story of hope, that despite the challenges we sometimes face, things can work out for the best. There is also a message for other readers, particularly family members of gay men to try to explain that sexuality is so complex and is not black and white and certainly is not about choice.

Why do you think the book will appeal to more than just gay men?

J James: Initially I guess my target audience was the gay community and essentially I still feel that is who will most connect with the book. This includes openly gay men, men who are still not out and curious men. I was also targeting the families of gay men so that they might better understand the complexity of what their loved ones may have experienced.

However, with the positive feedback from my very diverse group of friends who were reading the book as I was going along I started to realise that everyone was connecting with the book. This has been reinforced from the reviews I have received on the book – gay men, straight women, lesbian women, straight guys. I think it is because the book is so relatable because of the range of themes explored such as growing up and puberty, relationships, sex, friendship etc. For me, the wider the audience the better the chances of spreading the message of the book. Improving equality for the LGBT community comes from educating society. If the book makes some steps in supporting this then it will have all been worthwhile 🙂

Is it a memoir, or fiction, or a combination of both and why did you choose to relay your story in this style?

J James: This was a big decision for me. The book is based mostly on my life. Jack is largely relaying my life but there is a bit of other characters experiences within Jack. I think everyone can relate to Jack. There is an element of fiction as I was concerned about protecting the feelings of other people in the book and so there is creative adaptation to protect their identity.  The events are real but maybe the time-frames have been altered to add to the pace of the story.  I think writing in the style of a memoir helps others to connect to the story. I am currently working on a sequel and exploring changing the style of writing for that book.

I see you’re scheduled for a US tour in 2014. Can you tell us where/when we’ll get a chance to meet you?

J James: Yes, I am so excited about this trip. This will be my debut book tour and I am delighted that it will be in the US. I will be traveling to the States at the beginning of April and traveling along the east coast – New York, Washington, Boston and Philadelphia. My publicist Brian Goldthorpe is currently finalising all of the arrangements and we are both incredibly excited. Please do come along to meet me – I would love to hear direct from readers or exchange stories.