Welcome award-winning novelist and short story writer, Nathan Burgoine, to the blog with some insight into his writing. 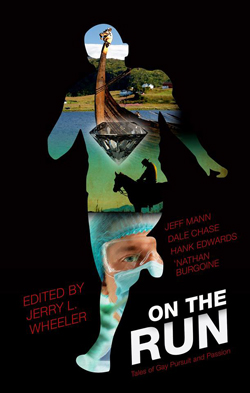 When I wrote my first novel, Light, there was a bit of recurring feedback from some of the readers who knew my short fiction that made me smile: “I wasn’t expecting to laugh.”

That’s probably fair. I have a reputation for bittersweet when I write short fiction; my first published short story, “Heart,” continues to be one of the stories I get the most feedback about from readers (and mostly about how it made them cry). In short fiction, I like to explore the theme of second chances – and second chances generally require someone to mess up something the first time around.

So, when Light hit the shelves and people started to laugh (which for the record is exactly what I was hoping for and boy was I a wreck waiting to find out if I could be funny or not) I was very pleased. Kieran the telepathic and telekinetic gay massage therapist was a very unlikely superhero who managed to deliver the chuckles I’d hoped he would, even as he fumbled his way into saving the day.

After Light, I’d intended to go back to short stories for a while, but I got a request from Jerry L. Wheeler that was too good to pass up – he was putting together a collection of four novellas with a theme of pursuit, chasing, or tracking down, and wondered if I’d consider submitting something.

I hadn’t tried a novella before, and as a short fiction writer, I certainly liked the idea of a novella more than a novel, so I started thinking and found the seed of an idea that took root, and before I knew it, I was typing away – and it was a bittersweet second chance story.

The bare bones of my novella “In Memoriam” is this: James, an editor, finds out he has got only weeks left to live thanks to some tumors that are starting to seriously destroy his brain. His memory is affected, as is his sense of time, his understanding of language (especially his ability to read) and he realizes that though he doesn’t have a lot in his life he’s excited about, there’s one thing he wishes he could fix: Andy. Andy was the first guy James ever allowed himself to love, way back in high school, and they stopped speaking some years ago when James was in university. That Andy ran off and broke ties with everyone and probably doesn’t want to be found doesn’t really enter into James’s mind.

The hunt is on.

I generally come at stories with a paranormal slant, and while “In Memorium” definitely qualifies in that regard, it’s a bit different than most of my stories – it’s not magic, exactly, or a psychic ability, but time and memory that offer up the otherness. James, in losing his grip on time and memory, might just have an opportunity to have time and memory lose its grip on him, too. I couldn’t have written this as a short story. Having a novella length work to work with gave me a lot more freedom to build characters and backgrounds and the world in which James lives, as well as explore exactly what is happening to him as the tumors progress. It was a very liberating experience.

I also did something I very rarely do – I let James have a significant portion of my own attitude.

I like to laugh (bittersweet stories notwithstanding) and when faced with things that are overwhelming and horrible, my go-to response is to make light of it. That isn’t to say I don’t take things seriously, because I do, but if I’m going to face something miserable, I might as well at least get a laugh out of it. In a recent radio interview, my editor Jerry L. Wheeler said this character seemed very much like me, that I’d “taken off the masks” and I think that’s apt. Also, Jerry’s perception is a wee bit scary.

So I hope what I’ve written is a bittersweet – and funny – novella about the one that got away, and maybe getting him back before it’s too late.

Can a dying editor find the one that got away? Can memory be rewritten into something good before it’s too late? Can you laugh even when the world is proving you to be very mortal? Well, obviously I think all three are worth a try.

I like to think everyone loves the idea of a second chance, and I hope “In Memoriam” delivers one that’s unique or at least fresh for new readers. Because at the end of a life, the only thing better than having no regrets, it seems to me, would be having the chance to make something right.

If you’d like to read “In Memoriam,” it’s the final novella in the collection On the Run: Tales of Gay Pursuit and Passion, edited by Jerry L. Wheeler for Wilde City Press.

Synopsis for On the Run:

Join four of the brightest lights in LGBT literature—Hank Edwards, Jeff Mann, Dale Chase, and Nathan Burgoine—as they spin yarns of love and lust between pursued and pursuer in editor Jerry L. Wheeler’s latest anthology, “On the Run: Tales of Gay Pursuit and Passion.” From 1940’s jewel thieves to burly Vikings to Butch Cassidy and the Sundance Kid to modern day jamais-vu, this book will take you places you’ve never been for action like you’ve never seen. Full of lusty outlaws, tender caresses, and moments of heart stopping beauty, you’re sure to find something that brings a tear to your eye and a rise to your lap. Climb in the getaway car and hang on!

Publisher Purchase link: On the Run

Nathan Burgoine’s short fiction appears in two dozen publications, including FOOLISH HEARTS, THIS IS HOW YOU DIE, THE TOUCH OF THE SEA, BOYS OF SUMMER, MEN OF THE MEAN STREETS, and FOOL FOR LOVE. His non-fiction appears in A FAMILY BY ANY OTHER NAME, 5×5 Literary Magazine, and I LIKE IT LIKE THAT. His first novel, LIGHT, was a finalist for a Lambda Literary Award, and is available from Bold Strokes books.