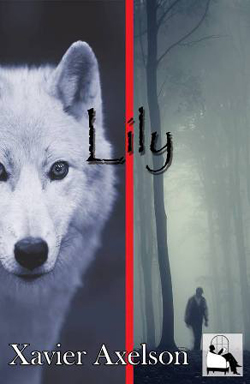 Lily is the same story it was in 2012. A little girl is dragged into the woods by a wolf, only to return a year later, “different”.  Her father mourns his child to the point of madness, but finds hope in new love and the belief his daughter will return.

[tweet_dis]Lily is also a horror story.  It speaks to the unspeakable fear of losing a child.[/tweet_dis] My understanding of Lily changed as time passed and meeting her again, challenged my beliefs in childhood innocence and the loss of that delicate quality. This child saw things, understood darkness and terror, she’d lost something greater than her father, she lost her innocence and her family. The story hasn’t been rewritten, but the scenes between Lily and Pryor (her father) have been expanded to encompass certain fears and chills associated with the loss both of them are struggling to manage. In fact, these fears are unmanageable and so is Lily, and I had to let her be the monster she really is. I have goose bumps as I write this, she really is scary and there were moments when I feared for Pryor and Ned. I hope they survive the next run-in with her.

Werewolves are not a favorite creature of mine.  I prefer demons and massive beasts like Godzilla, and leap away from traditional takes on lycanthropy.  Whitley Streiber’s The Wolfen is one of my favorite interpretations of “werewolves” followed by Wolf with Jack Nicholson…and those are the only two I can think of. I love the presence of the moon and silver in werewolf lore, but in Lily the moon serves as a transformer of all shadowed things, what other purpose does moonlight serve but to transform? In the case of silver, I made Pryor’s love interest a silversmith, mostly because my best friend was training to be a silversmith, and I loved the idea of Pryor desperately clinging to the belief in silver as an antidote to Lily’s change. He grasps at this folklore, but discovers love is the ultimate weapon.  I don’t want to give away the relevancy of silver to the story but its there for werewolf purists, but different, like Lily.

[tweet_dis]The scariest part of the story is that it is based on actual events. [/tweet_dis] The summer I wrote this, a young girl was snatched from her swing set and dragged into the woods by a coyote. It happens quite frequently in California, more than you’d imagine. Luckily, this little girl was saved and unharmed. As California populates, the coyote’s habitat dwindles and they come into back yards, front yards and kill pets, snag kids and do everything they can to survive without land. The same summer, the town where I live decided to tear up the main street. Literally, the entire town was under construction. The noise and commotion was sensational. One day while driving in this hot, sweaty, frustrating mess, I fantasized that all the banging and clanging, and uproar woke something up in the mountains, and that thing came down, and wasn’t happy.

The story itself was intended as a Father’s Day story, the publisher’s theme was “Dad’s need love too,” and “It’s not easy being a Dad.” Well, what could be harder than having a werechild as a daughter? That was my thought process and the whole Father’s Day theme is definitely in there, only different…like Lily. Luckily, or naturally, the initial publisher decided to release Lily as its own title and not part of the Father’s Day collection. Phew! I still think of it as a father’s Day story, but am probably the only one to do so. I see the horror, but also the struggle of Pryor and Lily, their love and the tragic divide between them.  Isn’t tragedy the intriguing part of horror? Dracula is a tragic, epic romance, Frankenstein is horrifically heartbreaking, even the connection between Ripley and the Aliens is somehow fascinatingly tragic…I’ll stop before I get into how sad I think Halloween is.