You are here: Home / Author Interviews / Rejecting Your LGBTQ Child by Sue Brown

This is a special guest post by my friend and fellow author, Sue Brown.  She shares my passion, as you can see below. ~B.

Who am I talking to here? Probably not the people who should be reading this. So let me tell you about me. I grew up just outside of London, England. Nice area, nice parents, nice school. Everything just ‘nice’ and ‘normal’. And that’s it. Aside from my mum dying when I was eighteen there was nothing different about my life.

Scroll forward to today and I live about ten miles away, have two teenagers, and live in a pocket-sized house in a nice area. They go to nice schools and everything is just nice and normal.

What would happen if one day one of my kids told me they were gay or lesbian? What if they were transgender? Would it be nice and normal then? Yes, of course it would be. I don’t give a monkey’s who they are, who they love. It just doesn’t matter. I can’t emphasise that enough. I don’t care, and neither does their dad.

I cannot and will not understand why you would reject your child for their sexual or gender orientation.

But God says…abomination… sin… Leviticus… ah yes, the old religious argument. I’m a Christian but I’m also a theology graduate so please, you can shout (and boy, do you have loud, shrill voices) the same tired scriptures until you’re blue in the face but from Biblical history to the sociology of religion, I’ve studied it, and I know you’re wrong.

You reject your child because they’re not what you consider normal. They don’t fit into your nice little world. You think they’re going to be damned because they are attracted to their own gender. They make you different, don’t they? They make you ‘other’ in the eyes of your family, your community and your church. They make you less.

Or you just find gays ‘icky’. Unlike the US, Britain is mainly secular. Church goers are definitely in the minority and we don’t have the fundamentalist grip on our policies and education, thank goodness. For many people they can’t use the Bible as an excuse so ‘icky’ sums it up.

What about them, your children? The gay boy, the lesbian, the bisexual kid and transgender kid. They grow up listening to hateful speeches by their parents, their pastor, their church, the gay bashing by their peers and the discrimination by the government. They see what happens to the kids who do come out. They watch worldwide gay rights take one step forward and two steps back. They hide, too scared to come out for what their parents might say. Some never come out. They live in effect a lie their entire lives.

Do you even know what LGBT kids of your community go through? The parental rejection, the exploitation they face, bullying and homophobia, and the exposure to drugs and prostitution on the streets? Do you know the suicide rates for LGBT youth? Do you read the media reports? Do you even care? Is your child frightened out of his or her wits over something they know they can’t tell you?

Does it sound like I’m shouting? Yes, I am. I make no apologies. I didn’t know. My nice and normal upbringing didn’t prepare me for the realities that LGBT youth face. I’m ashamed to say that the first I became really aware of it was the spate of teenage suicides in 2012. 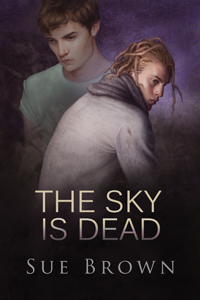 I wrote The Sky is Dead because I saw story after story of parental rejection on the Internet. Not one or two, but hundreds and hundreds. Some people have never spoken to their parents from the day they came out, and the pain echoes even from a few brief words. Danny isn’t one person but the amalgamation of their stories dripping into my psyche. I cannot think of the pain they have suffered at the hands of the people who should have loved and protected them.

To all of you with gay children who embrace and love them unconditionally, to all of you who have struggled but still love your kids, to those who’ve finally reconciled with your kids, I respect you and salute you for being real parents.

I want to do something to help, so I am donating the royalties from this book to The Albert Kennedy Trust, a UK charity supporting LGBT homeless youth. The charity was dedicated to Albert Kennedy, a sixteen year old homeless young man who fell to his death from the top of a car park in Manchester in 1989. In the same year an organisation was formed in Manchester to support young people like Albert Kennedy and the trust was dedicated to Albert as he epitomised everything the Trust was set up to prevent.

I leave you with a few useful websites; both UK and US.

Stonewall Housing – Run a free, confidential housing advice for LGBT people of all ages, across London, via a daily advice line (020 7359 5767) and three drop-in surgeries. We also run six hostels for LGBT people under 25.

The Sky is Dead is not all gloom and despondency. Rather it’s a celebration of Danny’s determination to survive, and the love story between Danny and a young man who slowly teaches Danny to trust again.

Danny is young, gay, and homeless. He lives in the park, preferring to avoid attention, but when thugs confront a stranger, Danny rushes to his rescue. He and the would-be victim, Harry, form a cautious friendship that deepens months later, when Harry persuades Danny to visit his home. Daring to believe he has found happiness, Danny finds his world turned upside down yet again when tragedy strikes.

Until he runs out of options, Danny won’t trust anyone. Finally he has to accept the offer of a home, and Danny becomes David, but adjusting to a new life isn’t easy. When he meets the mysterious Jack, it stirs up feelings he thought were long gone. Can David dare to allow himself to love? Or will the truth bring his new world tumbling down around him?

Sue Brown is owned by her dog and two children. When she isn’t following their orders, she can be found plotting at her laptop. In fact she hides so she can plot, and has gotten expert at ignoring the orders.
Sue discovered M/M erotica at the time she woke up to find two men kissing on her favourite television series. The series was boring; the kissing was not. She may be late to the party, but she’s made up for it since, writing fan fiction until she was brave enough to venture out into the world of original fiction.
Sue can be found at her website, her blog, on Twitter, and on Facebook .