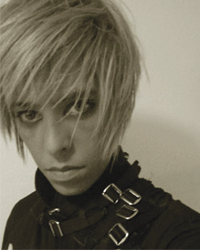 Grydscaen:beginnings tells the story of Lino Dejarre, a psychic clandestine operative of the Psi Faction and his pursuit of two escaped psychic test subjects Faid Callen, the leader of the hacker group, the Packrats, and Riuho Dejarre, Lino’s half brother who was horribly tortured at the Psi Faction. The book follows Riuho and Faid’s exploits up until their escape from the Psi Faction when they rejoin the Packrats.

What makes this book my favorite is that besides the technology and cyber terrorist hackers, the story deals with the seedier side of the grydscaen world including drug addiction, homeless youth, male prostitution, and gay and transgender discrimination. The psychics are oppressed by the government and some of them like Rom, a gay teenager ends up being homeless, discarded by the Psi Faction when his psychic conditioning didn’t take correctly. Another character Naito comes out to his parents in their upper class home in the City and is thrown out on the street. Blue, who is transgender was abandoned as a child and has to go through questioning the world and the emotional turmoil that brings.

The lead character Lino is bi and we get to see more of his backstory with his abusive boyfriend in grydscaen:utopia which details Lino’s recruitment to the Psi Faction. Even though Lino is a clandestine operative, he is also a member of the royal family and his sexuality plays a key role in the later books when he is mate paired, a relationship between psychics, to the Emperor’s son.

Faid, on the other hand, is a male prostitute and a drug addict, addicted to psi inducer drugs that psychics need to control their power. Even though Faid is the leader of a hacker organization, there is a whole chapter with Faid tricking and using as he tries to survive on the streets of the Echelons hounded by the Zone Police and trying to find a safe place to sleep either in abandoned buildings or in the arms of his main john, an older gentleman, who supports him on occasion.

I wanted to make a commentary about some of the darker edges of society and show strong gay characters who even though they are faced with hard situations and discrimination, inflicted on them by an unjust world ruled by the Elite government, these characters eventually shine. Some like Lino grow into their royal privilege proud of who they are and who they love. Others like Riuho, fall prey to their sense of being oppressed and take a stance against society that all citizens need to be dealt with and are against him. The Packrats are hackers and I show them taking part in this behavior without making a commentary about whether it is right or wrong, that is up to the reader to decide. The Packrats can be seen as cyber terrorists or freedom fighters. Who’s side are you on?

Grydscaen:beginnings also has something to say about gays in the military. There are two mobile frame pilots in the story, Nathaneal a gay male and Sati an FTM transsexual. Both are Quadrion Isshin mobile frame pilots which are transformable war machines that have an aircraft mode and a frame mode and can be flown with the help of the pilot’s psychic power through a biometric nanomachine port called a jack implanted in the head at the temple. Though they are not in a relationship at the point in the story that beginnings takes place, they have to contend with discrimination over their eventual relationship and Sati’s ability to accept his gender role. Even though Sati and Nathaneal are qualified fighter pilots, and Sati is listed as the best pilot in his class, the question of his sexuality remains front and center in his trying to gain acceptance with the other cadets in air combat training school.

I wanted to create strong characters who could act as role models for LGBT youth. I address bullying, mental health, relationships, transition, homelessness, and discrimination all within the backdrop of a dystopian world set in the near future in a sprawling City post nuclear war. When I was in college, there was no information such that I wrote in grydscaen about the gay community of which I was aware. I just hope that questioning youth can see that transgender or gay is not wrong. I wrote this series for sci fi lovers. I believe in the message and will keep writing it.

There are currently 4 books published in the grydscaen saga: utopia, beginnings, retribution and war, with a 5th book alliance due out next year. You can find them all at: http://www.grydscaen.com

Natsuya Uesugi is a Systems Analyst. He has a Master’s Degree and also studied animation and game design in art school. He enjoys skydiving, cosplay and anime. He would like to make a graphic novel of grydscaen some day.