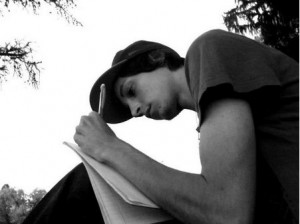 Welcome first time author, Edward Jakab to the blog. Since it is so close to Valentine’s Day I thought we would talk about young love, and Mr. Jakab’s first book, Fearless, is about just that.
B: Tell us about how you got started and where Fearless came from?

E: I first started writing screenplays; they were always about this guy named Jacob Moore who is based on me.  I wrote the book mainly because the story needed to be told. I just kept going back to those couple of moments in my life when everything was great with my first boyfriend, but then that took me to the time I told him about the other guy and how guilty I felt. But the other guy, he was the one. I know people say that all the time about everyone, but I truly feel he was the one, and he still is in some ways.

B: I can completely relate, even at my age. But your book is definitely a story about youth, why? 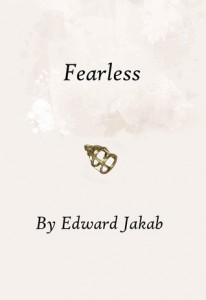 E: Fearless, starts off with the first time I ever found a guy, or anyone for that matter, attractive. Then it fast forwards to a glimpse of my last year of high school. My first relationship began that year also. Most of it is true, although the ending isn’t because I don’t think I could ever actually do that. OK, I’m lying. I would totally do that if I felt that much.

B: Do you plan on making writing a career. or was this just a story that you had to get out?

E: Yes, I do plan on making a career out of writing. I’m in college right now and my major is Creative Writing. I really love writing.

B: Is there a sequel coming?

E: Actually, yes. I’m working on the sequel to Fearless. It’ll be about Jacob and Drew’s life in their senior year of college and how a misunderstanding can lead to really bad things.

B: Anything else, another book perhaps, or a screenplay?

E: I have an entirely different book in the works; it’s about a world where vampires and other nasty things exist, everyone knows about them, and a few are called to fight them. The story is basically about a boy who is called to fight them and how he deals with the forces of darkness.

B: Excellent. Now we’ll be waiting to see what you bring us in the future. Thanks for stopping by.

Jacob Moore is your average teenager, except he is in love with his best friend, Drew Jonas. Drew doesn’t know. Well, that is until Jacob comes out to Drew during their summer vacation.  At first, Drew seems to take it well, but then Drew suddenly gets a girlfriend, Belle Blackie. Jacob is completely devastated. But that’s not the worst of it. When school begins, every student at the high school, and even the faculty, know about Jacob’s feeling for Drew.
Jacob is bullied in gym class, in the hallways, and even in the cafeteria. Students he doesn’t even know call him names and spread rumors about him. People he used to be friendly with unexpectedly become mean and uninviting.
Then along comes Eli Gordon, a new student at the high school. He literally knocks Jacob off his feet. To make up for the accident, Eli asks Jacob out on a date. To which Jacob replies with an earnest yes. Eli takes Jacob out on his first date, gives Jacob his first kiss, and drags him headfirst into his first romance.