You are here: Home / Gay Fiction / He tastes like Sin 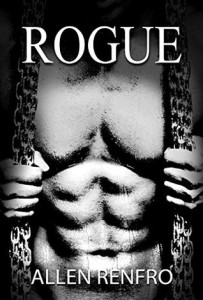 The tone of Rogue, by Allen Renfro, is set from the very first line. This isn’t some slap-happy romance full of feels and nauseating good guys the hardline romance readers swoon over. In fact, it’s not a romance novel at all.

Rogue resonated with me because Renfro’s portrayal of gay men below the Mason-Dixon line is spot on. I know these characters in real life. I’ve met them on the streets and in the clubs of Atlanta, Memphis, Tupelo, Houston and a dozen other southern cities. The upbringing of these corn-fed beauties shows even in their arrogance. And so does the baggage they carry.

But what struck me here was everything Renfro didn’t say. The flip side of arrogance is insecurity, and Renfro could have made this into a weeping, sob story of self-reflection and redemption, but that would have ruined everything.

Who wants to change when you’re on top of the world? Short answer: No one does.

Even the bad boys win one once in a while. And these boys are so sinfully bad. Sometimes, evil just tastes better.

Get Rogue from Amazon

Allen Renfro makes his home in Knoxville, Tennessee and is a native Tennessean. A graduate of Tennessee’s oldest college, Tusculum, he frequently appeared in the small press and underground zines of the early to mid-1990s. A published poet and artist, he has tackled controversial subjects and is making a name for himself in dark fiction. He is the author of the supernatural thriller The Raised and the psychological thriller Snap. The Falling, the sequel to The Raised, was released in January 2013.