But let me back up a sec. My introduction to the gay community was when my older brother came out to me. I was 12 and didn’t really understand the whole socio-cultural implication of “being gay” because one, I was 12, and two, it was the 1970s so this was pre-AIDS. Being gay was not commonly mentioned on television or in pop culture so I wasn’t exposed to it in my sheltered suburban childhood. It was shocking news that Uhura and Kirk had kissed on Star Trek (I was appalled; isn’t that sexual harassment? He was her boss!)

Although I was just becoming sexually active, I wasn’t quite sexually mature enough to understand all the implications of what my brother was telling me but I kept thinking about it, what it meant for his life—and of course, what if one of my characters were gay? What would that mean for the guy in my fictional world? Because it’s all about me and my writing, isn’t it?

Obviously influenced, around age 15, I decided Joshua needed a “best buddy” and created William Harrington. William wasn’t just Joshua’s buddy; they were lovers, and before I knew it, they were married! How did that happen? Same sex marriage was not even a term yet coined in 1975. Yet there they were and the whole backstory that I finally wrote in 2012 for WHEN MINDS COLLIDE had already unfolded inside my head. It completely affected the way I wrote the Phoenician Series books in the 1980s. I had gay characters in my fiction before I ever wrote the first book!

I don’t single out any gay characters or gay relationships as a central focus, but rather I populate my world with people—and some of them happen to be gay. Gee, imagine that, it’s just like in the real world!

See, I object to writing characters—gay or straight—as if they are defined by their sexual orientation. It feels to me like racism or bigotry. Real people have multiple layers and a full array of traits—good, bad, strengths, weaknesses, virtues and flaws.

I know the LGBT community doesn’t get much representation in mainstream fiction so that’s probably a driving force behind the fact there even is such a term as “gay fiction” but I have to think of that funny photo that circulated around Facebook a couple of years ago talking about “gay lunch” and “gay parking.” How is “gay fiction” any more sensible a label?

I thought of this and was infuriated when a reader called a conversation between Jared and William in CONDITIONED RESPONSE a “gay conversation” like the mere fact that the two conversants were gay somehow colored the fact they were having a conversation. They were standing over a charred corpse, for gossake! How gay is that? Not very—not unless you’re a necromancer.

So no, I don’t write “gay fiction.” I write science fiction. And chances are, some of my characters are gay. Some even change orientation when their lives are irrevocably altered.

Like after Andrew Caine (William’s not-quite-late husband) dies in WHEN MINDS COLLIDE, along with self-righteous homophobe, Joshua Scherrer, the resultant Joshua Andrew Caine is neither gay nor straight. He’s not bi either. He’s completely dysfunctional—or maybe the reason he can’t maintain a relationship is just the fact he’s such a pompous ass. I dunno. I like Joshua. Hey, he’s been with me since I was 5. I’ve learned to go with the flow and adapt to his changing identities.

Sometimes, people just aren’t sure who they are and you have to be willing to take them where they stand at the moment. In the now. That’s what my stories try to do with my characters. That and some good, hard science, mixed with a little alien mind control, because hey, I’m the AuthorGod and I like alien mind control.

My new book will be Raif’s story. He’s probably the single-most popular character I’ve ever written—and I created him by accident! I needed a new point of view when I was editing in 2005, so I followed Robert A. Heinlein’s advice and made an “everyman” guy. He’s a Proctor: nameless, faceless, obedient soldier type. Yum. Of course, then Raif decided Proctors should have names. And faces. And not always obey every order the World Council issues.

Wow, is Raif ever a willful man! He completely took over the page and then bled out into another book. But I do love him so I’m giving him his own book: MAN MADE MAN. I have a nice little summary on Goodreads talking about Raif’s journey in his book, and I’ve decided to crowdfund the publication this time because I can no longer afford to do it all myself. Indie Publishing is just too much work for this middle-aged woman to handle alone.

Back in the olden days, rich people paid large sums of money to commission valued art. With crowdfunding, lots of little people can contribute little amounts and get the art funded that the crowd wants, not just what the rich people with deep pockets decide to buy for us.

I’m hoping people will want MAN MADE MAN as much as they did CONDITIONED RESPONSE and WHEN MINDS COLLIDE. If I can finance the editing, proofreading, formatting, etc. by crowdfunding it via Kickstarter, I can focus on just writing the book and hopefully get it out for Christmas, 2013.

My Kickstarter is at http://kck.st/RaifStory and runs through April 24, 2013. Pledge amounts as low as $10 will get backers a digital download. If I don’t get fully-funded, no one pays anything and we should all be sad because the book won’t be released this year.

I think crowdfunding is going to change the future of Indie Publishing, not just non-mainstream genres like (choke) “gay fiction.” Crowdfunding means small and focused reader communities can band together as Patrons of the Arts they want to see and they can get exactly that work without having to comply to the guidelines of mainstream publishers or booksellers. We artists can write what our Muses and characters tell us and not get “relegated” to whatever category some eTailer decides suits us best. We can all choose our own labels now! It’s going to be exciting to see where this goes.

Thanks again for having me here, Brandon. It’s great to reach a new audience. I hope some of your regular readers will try my work and find it speaks to their minds and not just their bodies. 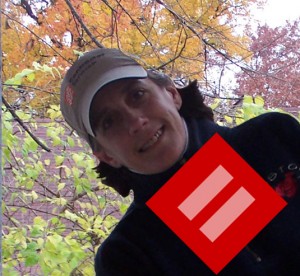 Marjorie F. Baldwin (or “Friday”) is a pen name for science fiction writing by Sarah R. Yoffa. That’s her slanted personality in the colorful avatar. Friday was also the title character of the Robert A. Heinlein novel from the 1980s about “Artificial People.” That story heavily influenced the creation of an Artificial Lifeform named “Charlie” who became a leading male character in the Phoenician Series books.

Learn more about Friday at http://about.me/FridayBaldwin