Welcome debut author Ty Jacob to the blog with his new novel, The End of Billy Knight. I asked Ty to let me profile his book because I read the first chapter and was hooked. He has kindly allowed me to excerpt it here. ~ B. 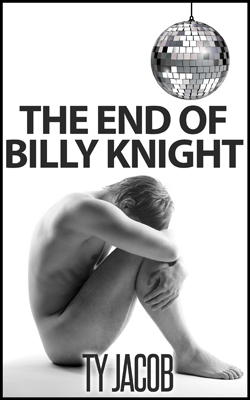 The End of Billy Knight is a genre-bending blend of dark literary fiction and playful gay romp, set in a world that’s intense, dangerous, and fun.

Mike is a sexy young hustler. Dale is middle-aged, overweight, and aware that he’s running out of time. When they meet, their lives become connected and their dreams intertwine.

The End of Billy Knight moves between bawdy humor and deep sadness to reach beyond the obvious stereotypes. This is a complicated portrayal of two truly flawed people, both lost in their search for meaning and love.

MIKE DIDN’T KNOW how old he was when it happened, but he was young enough to be sitting on his mom’s knee when the man rushed into the back room with a mask over his face, carrying a rifle. It was his happiest boyhood memory.

They had just finished eating dinner and the room still smelled of warm roast beef. The dingy peach walls were lit with the soft light of the daisy lamp that hung above the table. The dishes had not yet been cleared. The blue-white fluorescence of the shop out front spilled in, framing the man’s thick body in the doorway, an angry silhouette in a bright rectangle of light.

Mike felt his mom’s arms wrap around him. She screamed and turned so that her body hid him from the gun. For a moment he couldn’t see. His mom’s arm was across his face, her chest heaving. He could feel her trembling. She was holding him so tightly that it hurt.

When she reached out to grab his sister, Lisa, and pull her close, he saw that Lisa was crying. Lisa’s long brown hair jolted to the side as his mom pulled hard and fast.

The pale skin around the man’s eyes stuck out against the dark mask. Mike grabbed the floral print of his mom’s skirt and hid. She kept her hand down in front of him, as if it was enough to protect him. The man came close. Mike saw the mud on his shoes, the dirty grey denim of his jeans. Looking up he saw the nearness of the rifle, the dusky black metal. He heard his mom screaming.

His dad shouted, “Abby, don’t move!” and ran out into the shop. Mike could see him through the doorway, opening the cash register, pulling out all the money and putting it in one of the white plastic grocery bags they used for the fruits and vegetables. Then he came back into the room, the bag in one hand and the other hand up in the air, empty.

The man grabbed the bag of money and pushed past. Then he turned back and said, “Don’t call the police. I have men outside all around you. If you pick up the phone they will kill you.” He ran through the doorway and into the shop, past the tomatoes and carrots, beyond the eggplants and bananas, and he disappeared into the heavy darkness of summer night.

What Mike loved about the memory, what would make him cling to it throughout the rest of his life, was not the man with the rifle, not the soft peach room turning suddenly dangerous. It was the way his mom had held him, the way his dad had begged for their safety as though he really cared, the way both his parents, in that horrible moment, did everything they could to protect him. He was someone who was cared for, cherished. There were people in the world who wanted to keep him safe.

It would be years before he’d have that feeling again.

Ty Jacob grew up in the Midwest of the United States and spent years wandering the globe. He has worked as a waiter, bartender, wedding DJ, editor, writing instructor, and English language teacher. He now lives on a remote island in the South Pacific. He loves literary fiction and trashy pop culture in equal measure.

‘The End of Billy Knight’ is his first novel.