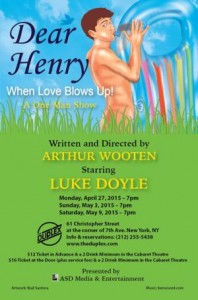 Brandon: That’s a significant shift from paper to the stage.

Arthur: When ASD Media approached me with the concept of adapting my Dear Henry column, I was fascinated by the challenge. With the casting of Luke, this project took on a life of its own. Every rehearsal has felt like a mini-workshop and I hope the play will delight audiences as much as I’ve enjoyed working on it.

Brandon: I’m already enthralled. Tell me a little about what to expect.

Arthur: In the stage production, we, the audience, wait for Henry’s arrival as Clark expounds on the tumultuous roller coaster ride of a relationship they’ve shared. Reminiscing about their adventures together, Clark takes us on a journey from online chat rooms and underground sex parties to all gay cruises and drag queen karaoke. And as challenging as the ride has been, we all know, sometimes breaking up is really hard to do.

Brandon: That sounds like one helluva ride. (See ticket information below.)

Arthur Wooten is the author of the critically acclaimed books Leftovers, Birthday Pie, Dizzy, On Picking Fruit, Fruit Cocktail, Wise Bear William, and Arthur Wooten’s Shorts. As a playwright, his works include Birthday Pie, which was the winner of the Key West Theatre Festival and most recently it launched the new play reading series at the Irvington Town Hall Theater in Irvington, NY. His one-act plays, Lily and The Lunch, have been produced in New York City and most recently in Te Anua, New Zealand. As a director his productions include: The Lunch, Just Say Hello and Smile, Birthday Pie, and Dear Henry.