You are here: Home / Author Interviews / Body Shapes and Stereotypes

Welcome author Richard Pearson  with an excellent post about our detrimental habit of stereotyping the bodies of gay men. ~ B.

So when you hear these words: “You should meet my friend Richard, he’s in his early 30s, an attorney, an actor, and an author, oh, and he’s gay,” what mental image do you have? 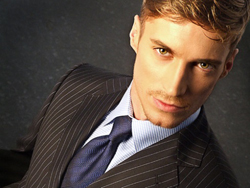 What if I told you he actually looked like this? 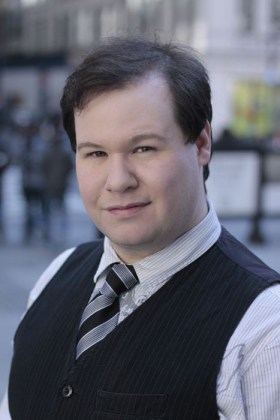 Not what you were expecting? Why is that?

For the record, the first one is Djordje Bogdanovic, a runway model, the second one, is me. Yet when I am described to people, they usually expect the model and not the adorable guy in the vest, and a big reason why is that I don’t look like a typical gay man.

There are a lot of stereotypes about gay men, but the one that few take issue with is the notion at all gay men are good looking. In fact, good-looking doesn’t cover it, the stereotype is that gay men are physical gods with perfect hair, an impeccable wardrobe, and abs that could be literally used as a washboard. [tweet_dis]The truth of the matter is that gay men range in levels of attractiveness just like everyone else.[/tweet_dis] It isn’t like when you have your first same-sex kiss you become transformed like a vampire, yet most of the gay men we see in the media are obscenely good-looking.

So what’s the problem?

Isn’t the idea that all gay men are better looking a good thing?

The answer is: No.

While it appears to be complimentary, it can be very harmful. There are plenty of gay men, like me for instance, who are perfectly cute but don’t look like a stereotypical gay man. I’m not skinny nor am I muscled up. Those appear to be the only two models gay men are allowed to be. Though there is a slight exception to this if I were a “bear” or into S&M. I’m neither, I’m just me. I’m…average? Human looking? Yet, I so rarely see a gay man portrayed as being anything other than amazing looking, that I have often wondered if there is something wrong with me. If gay men are supposed to look like lithe elves or Olympic athletes, and I don’t, can I call myself gay? The obvious answer is yes, but the issue persists.

As a writer and actor, I like to do my part by not having every gay character be supremely attractive. This is easier as an actor, as there is only so much I can do during a rehearsal process to get in better shape.

However, in fiction, I make the conscious choice to show that body image is an issue for gay men. I also like to point out that the characters who look like Greek statues do this by constantly working at it and rarely cheating on their diet. I make it look as hard as it is.

All too often the gym is glorified in LGBT novels/Films/Television. It’s seen as a hook-up spot, and who wouldn’t love to go to the gym if the idea is not only will you maintain your awesome bod, but likely get laid in the process? I’m not going to deny that gym hook-ups don’t happen, nor am I going to try and say that there does not seem to be a disproportionate amount of very good-looking gay men amongst the LGBT population.

The issue is the expectation.

Fortunately, there have been some strides in this area. Both Jesse Tyler Ferguson and Eric Stonestreet (who play the gay couple on Modern Family) present us with portrayals of average looking gay men. Things are getting better, but I still encourage consumers of LGBT media to really pay attention to whether or not a character needs to be the hottest thing ever to grace the planet for the story to work. The characters in my novel who are the most beautiful, know that beauty like that comes at a heavy price.