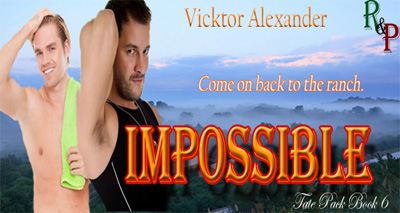 Impossible, book 6 of the Tate Pack series is out and I am so uberly excited to hear what you all think. It was nice to return to the ranch, to hang with the guys again and I think you’ll all be very shocked by what happens in the story. Though I am to warn you that it’s angsty and will make you cry, at least according to my betas.

In light of where the royalties of the book are being donated I decided to do more than just give you the blurb, excerpt, cover and buy links, I thought I would tell you all why I really want this book to do well.

Last year I made a promise to donate half the profits of Impossible to The Trevor Project and half of the profits of Untouchable to the It Gets Better Project. I made these promises in light of all of the teenagers who felt as if the bullying, the scorn, the oppression, etc. that they suffered was just too much and committed suicide. I made it in light of the online friend I’d made who also succumbed to the darkness. I made the promises because of Justin, Angel, Patty, Lor, LaJoyce, Ryan and Keesha who all have come to my rescue, more than once, when I tried to give into the darkness.

I made the promise because of Susan.

When I was fifteen I moved in with my bio father in Pensacola because I was making a lot, a lot, of really bad, really dangerous life decisions. I didn’t want to stay with my father, but at the same time, the decision to move had been mine (try to figure that one out). When I first moved up to Pensacola, I was the outsider. I was one of maybe six black kids in the youth group at the church my father and I went to that consisted of over 200 teenagers, I was the only one of all of my friends who had engaged in a sexual relationship, had done drugs, drank liquor, rebelled, etc. I felt out of place. But I pushed on and began to clean up my act.

Then I met Susan.

Susan and I had a similar story. Our backgrounds and childhoods were similar and so because of Susan I had someone I could talk to. About a lot of different things. And I was the only person outside of Susan’s mother and a mutual friend, Eve, who knew Susan’s biggest secret.

Susan was a lesbian.

Because of the church we went to, the friends we had, Susan and I didn’t feel comfortable a lot of times sharing the thoughts, desires, the dreams or even our true feelings to those around us. But whenever we were alone, in her purple bedroom, with the walls covered with newspaper clippings, her bed covered in a black duvet and her cat hissing at us from underneath the bed, we could talk about those things.

I didn’t keep my promise.

When I moved back to Winter Haven, Florida I was 16. It didn’t take long for me to fall back into my old ways. And wracked with guilt I started dodging Susan’s calls. Responding to her emails with one line or two-line sentences. Before long the phone calls, the letters and the emails stopped. I’ll be honest and tell you that I was relieved. At 16 I was already responsible for my younger siblings, for helping out my bio mom, a single mother, around the house. I had school, my after-school activities, my siblings’ after-school activities, and my job, I couldn’t and didn’t want to be responsible for someone else.

I only found out that Susan committed suicide four months after we stopped talking, two years later when I went back to Pensacola for seminary.

I have been wracked with guilt ever since.

For over thirteen years since we stopped talking and eleven years after I heard about Susan’s suicide, I have been walking around with that over my head and I wanted to donate to The Trevor Project for Susan. So that maybe it won’t happen again. To try and atone for deserting a friend when she needed me most. While I understand when people tell me that it’s not my fault, I can’t help but feel as if it is.

I don’t think that I’ve ever talked about Susan with anyone outside of my therapist and other friends who knew her, but I’m happy that I have shared it with you all now.

There is a world full of Susans out there and I want to do my part to help.

I chose to donate all of my royalties from Impossible, book 6 of the Tate Pack series, to The Trevor Project. If you want, when you buy the book, you can leave me a comment here, on my website or on my blog to let me know if you bought the book because of someone, ie “This is for my friend_____” and each time I make a donation to The Trevor Project I’ll remember those who are mentioned. I’ve already made the first donation and it was $1250.00 donated in memory of Susan, Alan (a friend of Johanna) and Debby’s daughter.

I hope you all enjoy Impossible. Thank you for helping me help others and honor Susan.