You are here: Home / Gay Romance Novels / The final weeks until Afflicted 2 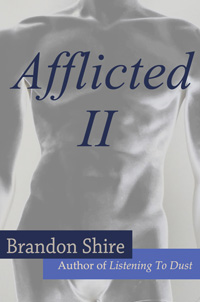 UPDATE: Publication date has been set for December 6th. Mark it on your Goodreads TBR List.

I’m in the home stretch for getting Afflicted II out to you by December and thought I would share some of the music that has been part of the writing process, as well as some thoughts about the Afflicted series itself.

If you’re on Goodreads and a member of the group my fans set up, then some of this may seem familiar.  Music is a big part of my writing process so it is always in the background when the pen is roaming across the pad.

In #1 Hunter and Dillon were working through barriers they had purposely set up to protect themselves, but I don’t think they ever fully explored who they were or what they had to offer a potential partner. Their chance meeting (and what happened after) was more of a sexual exploration than it was the development of a relationship and #2 delves into the recognition of their own potentials. I’m not too much on sappy love stories or men that turn into simpering idiots, but I’m finding that both of these men have a depth of hidden tenderness in them that I’m coming to admire. (If  they would just let it out!)

Note: I never know what my characters are going to do/say or where they will go, so the story is as fresh to me as it is to you. (In fact, I just met Dillon’s mother a few weeks ago and I did not like her at all. )

Tenderness while making love is an art form, or at least it should be. Most of the time sex with fictional characters just seems to be about the bump and grind, and frankly that gets to be boring after a while.  As Hunter and Dillon become more comfortable with each other on an emotional level I’m finding that despite Hunter’s inclination towards kink, he really enjoys  quiet intimacy more than kink. (Why? I have my own ideas, but I’ll leave that discussion to you.)

For instance, as he listens to a storm outside he asks Dillon to make love to him by the rhythm of the rain: http://youtu.be/dQA4EoE2cOM Slow, smooth, and yet… a little tempestuous too.

But that doesn’t mean he doesn’t like his bump and grind: http://youtu.be/vCadcBR95oU  He is, like most males, someone that enjoys the power of sex as well as the physical aspect of it.

So there you have it, a very small peek into what’s coming next month. Fans are coming together for a group re-read of Afflicted on Nov 26. So if you’re interested, stop on by the Goodreads group and get involved in the discussion. And you may learn about a few upcoming projects while you’re there.