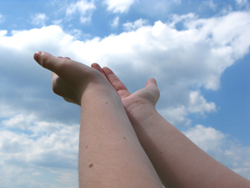 I’m a disorganized giver. I used to be an organized giver, but getting a long-term illness changed all of that. I’ll explain the difference in a bit, but first let me tell you something about my philosophy of giving.

I believe the giver always gets something out of a charitable act. In nearly every case, the giver gets the satisfaction of knowing they gave; of feeling like a “good person” for a while, or just knowing they are responsible for making someone’s life a bit better. In other cases, people and corporations get tax write-offs, or are assured that the cause they care about on a deep and personal level won’t die, or they get to have an experience they couldn’t have any other way. There are many more benefits of giving, I’m not going to go into them all here. These benefits are true (except the tax write-off) in both organized and disorganized giving.

About five years ago, I was firmly locked into a career in development, (a nicer-sounding name for fundraising). Just being in professional fundraising is something of a donation, since it generally doesn’t pay well. On top of that, my husband and I contributed in many ways to organized causes. Money (not a lot—see the “doesn’t pay well” comment) and plenty of our time. I was the co-chair of the parents’ group at my kids’ school, and I was on the board of an academic non-profit at the same time. This is organized giving, as I see it. It’s giving for the principle of giving, and you don’t always see the benefits immediately. It’s more about having faith in the organization you’re giving to, and belief in the need addressed.

Then I got sick. I spent a couple years lying on the couch, until I got better-ish. That whole time I didn’t work, I quit all my volunteer obligations and we stopped giving money for the most part, with a couple of exceptions. Medicines are expensive, as are out-of-network doctors.

Now I’m starting to work my way back into giving, but my whole focus has changed. I’m still interested in seeing my kids’ schools succeed, but I’m more likely to volunteer a few hours here and there than to run something. I’m not going back to working in fundraising—I couldn’t find a job in the field now even if I wanted to.

The main reason for my change from organized to disorganized is a changed focus on what I get out of it. I give because it makes me feel good. I give less money and more time and effort. I give things I’m talented at—like free stories, or profits from my book sales to causes I believe in (the Gay, Lesbian and Straight Education Network rocks). I talk to people online who are suffering from the same illness I suffered from. I try to meet immediate needs for my kids and their friends. It’s all about seeing the change around me, not just having some kind of faith that it’s happening, without seeing the end results. I take opportunities to give rather than plan them out.

The reason I do this is because I need to. I couldn’t do anything that wasn’t necessary for meeting my own immediate needs for two years. Now I can do a lot more, but I need to see the results, as a way of re-affirming myself. I need to know I really am better, and continuing to get better; seeing my influence on the world around me is daily confirmation of that.

I give to GLSEN because I know people that have been helped by it, and I see results in my daughter’s school. I give to my readers, because it makes them happy. I give to the kids I know because I like them and I can. I organized a writing group for my daughters and their friends because I wanted them to succeed (admittedly, they weren’t as committed).

What I’m saying is that I give for entirely selfish reasons. I used to believe this was a horrible way to give. Over time, both before and after I got sick, I saw how people gave to the world around them. Everyone gives to fill a need in themselves, even if the need is to ease others’ suffering so they don’t have to be confronted with it. Even if the need is a tax write off. I finally accepted that I give to get something from the act, and now I let what I’m getting from it guide my choices.

Raised on a steady media diet of Monty Python, classical music and the visual arts, Anne Tenino rocked the mental health world when she was the first patient diagnosed with Compulsive Romantic Disorder. Since that day, Anne has taken on conquering the M/M world through therapeutic writing. Finding out who those guys having sex in her head are and what to do with them has been extremely liberating.

Anne’s husband finds it liberating as well, although in a somewhat different way. Her two daughters are mildly confused by Anne’s need to twist Ken dolls into odd positions. They were raised to be open-minded children, however, and other than occasionally stealing Ken1’s strap-on, they let Mom do her thing without interference.

Wondering what Anne does in her spare time? Mostly she lies on the couch, eats bonbons and shirks housework.