You are here: Home / Author Interviews / Romance novels are about love

Romance novels are about love… with a capital L.  They’re about finding that elusive special someone who gets your quirks and insecurities, and accepts you as you are. Throw in a fabulous storyline with plenty of chemistry and you’ve got a winning combination any enthusiastic reader will happily devour.  However, it isn’t only the message of love that moves me in romance books.  It’s the message of hope. This is particularly true in the MM genre.

Hope is a feeling. An abstract concept.  It isn’t a certainty.  “Hope is being able to see that there is light despite all of the darkness.” (Desmond Tutu)  It is trusting there is a flip side to pain and heartache.  Sometimes it’s a fragile idea and other times, it is overwhelming.  Like something so close to reality, you can feel the promise of it coming to fruition.

When I began writing MM romance, it was because the genre spoke to me on a personal level.  My eighteen-year-old son had come out to my husband and me as he was about to leave for college.  It wasn’t a surprise. I’d been waiting a few years for his revelation and I was thrilled that he’d finally felt comfortable enough to share his news.  What I didn’t expect was his reluctance to fully embrace it.  He didn’t want anyone else to know.  He’d dealt with rejection and bullying all his life.  In his mind, declaring himself gay publicly wasn’t going to help.  His concept of hope was too delicate.  As a mother, this was not okay with me. Hope might not solve problems, but it’s preferable to wallowing in despair any day!

My first novel was written at the time my son came out.  It was my response to the uncertainty that was going on in his head. It was called Better Than Good.  It’s a simple love story about self-realization and bravery.  Moreover, it is a story of hope.  Fast-forward two years to my sixth book and most recent release, The Right Time, and the underlying message of hope is alive and well.  Nate is a successful businessman who has a hard time communicating in depth on a personal level. Alex is the opposite.  He is a retired professional athlete with a sunny disposition and a relentlessly hopeful outlook on life.  As a Latino gay man, he has overcome plenty of obstacles and he is passionate about sharing his experiences with LGBT homeless youth, whose foundations have been rocked by rejection.  At one point in the story, Nate remembers being told “The worse thing in life isn’t crashing rent free in a crappy garage.  It’s losing hope and convincing yourself you don’t deserve better.” True.

Hope is the beginning of creating a new reality.  In the case of a young gay man or woman, it may be the very thing that gets them through the day.  Life is a beautiful gift. Love, hope, faith are beautiful ideals.  No one can convince me my gay son is less deserving of his share of happiness because of his sexuality.  I know he is.  I will be his champion until I know his strong enough to hope for himself and work toward creating a future he deserves.  I think he’s on his way.  And in the meantime, I’ll keep writing love stories… with hope.

Thank you for having me on your blog today, Brandon! 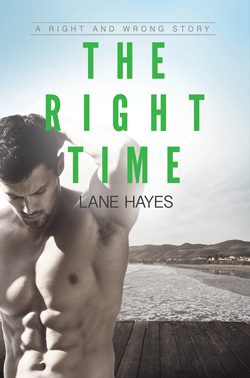 The Right Time by Lane Hayes

Workaholic Nate Erickson is a successful real estate developer who thrives on long hours and stress. When a Los Angeles project prompts him to relocate to Santa Monica, he welcomes the change of scenery. Nate has always considered romantic entanglements trouble, but his sexy next-door neighbor isn’t easy to ignore. Which makes no sense, because Nate is straight… or so he’s always thought.

Alex Reyes is a retired professional soccer player turned West Hollywood business owner with an insatiable lust for life. He loves his family, friends, and work. But there’s one life challenge left to accomplish: coming out publically. Respect for traditional Latino values has kept him in the closet, but Alex begins to think he and his new neighbor might help one another combat their fears. As Alex and Nate forge a strong friendship, they soon realize facing their personal demons will take more courage than either man bargained. The reward is immeasurable… if the timing is right.

I hadn’t worked out with a professional in years, and it felt foreign to wait for someone else’s direction.

“Any issues with your shoulders or arms? Any injuries I should know about?” he asked, handing me the weights.

“Great. Start with your palms facing your thighs, lift them both over your chest, then lower the left. Good. And now the right.”

He stood over me diligently, making slight corrections when needed. My supine position gave me an interesting perspective. When I looked up, I noted how his strong brow offset his twinkling eyes. I swallowed uncomfortably and turned my head, only to find myself staring at his crotch. His dark shorts seemed to hint they were covering a generous package.

“Uh yeah. Hey, weren’t you going to tell me about your Friday night?” I needed him to talk. I didn’t trust my thoughts anymore, and I was stuck in my current position crazily aware of a man in a way I hadn’t been in over fifteen fucking years. Diversion in any form was welcome.

Alex snorted. “I already told you. I went dancing, and oh yeah, I did get lucky.”

He added the last part with a hearty chuckle, no doubt catching my wide-eyed expression. I hadn’t expected that.

“Right.” I did? The strong flash of jealousy took me by surprise, but I pressed on. “Did you go back to the beach to get those girls’ numbers last weekend?”

He looked confused for a second, but a slow cocky grin soon spread across his handsome features as he crouched so his face was close to mine.

I gulped and watched his eyes lower to my throat. He licked his top lip and reached out to adjust my wrist.

“So a dance partner?”

“What? Oh. Yeah, I think so. I can’t remember. It was just one of those things, you know? Sit up. Let’s give your arms a break.”

“Just one of those things?”

“Yeah. One night. No numbers exchanged. No hassle, no fuss.”

I had no words. Literally.

Alex chuckled gleefully as he led the way to a leg machine. He gave instructions and stood back to observe me for a moment.

“It’s not necessarily my favorite kind of sex, but hey….” He shrugged his shoulders with his hands outstretched as if to say “what’s a guy to do?”

I recognized this cue. It was my opportunity to commiserate about the trials and tribulations of being a single man with a healthy sexual appetite. Now was my chance to admit it was nice every once in a while to have sex of the nonsolo variety with someone who knew the score. But I was tongue-tied and equally aware of a completely different undercurrent. One I wasn’t brave enough to explore.

“You can stop having fun at my expense any time.”

“You seem like someone who has a place for everything and likes everything in its place. You have a routine, and you don’t appreciate any deviation. I should be flattered you came to the gym with me at the spur of the moment.” He paused, running his tongue over his plump bottom lip. “If you’re not careful, I’m gonna think you like me.”

The air between us crackled. Alex leaned forward so his handsome face was mere inches from mine. His proximity alone seemed to issue a challenge. Daring me to confess I was more than I appeared to be. I doubt he expected any revelations, but his intent was certainly to… how had he put it, rattle me. And damn, it was working.

Lane Hayes is grateful to finally be doing what she loves best. Writing full time! It’s no secret Lane loves a good romance novel. An avid reader from an early age, she has always been drawn to a well-told love story with beautifully written characters. These days she prefers the leading roles both be men! Lane discovered the M/M genre a fews ago and was instantly hooked. Her first novel was a finalist in the 2013 Rainbow Awards and her third received an Honorable Mention in the 2014 Rainbow Awards. She loves travel, chocolate, and wine (in no particular order). Lane lives in Southern California with her amazing husband and the coolest yellow lab ever in an almost empty nest.