This kind of post is important to me because it lets my readers know 1) What’s going on with the money you spend when you buy The Value Of Rain (half the proceeds are donated to the two LGBT Youth nonprofits below); and 2) It also shows you how  just a little time and money can have a massive impact.  People tend to have this ingrained idea that their small contributions, or that the one hour they can volunteer a week, doesn’t really matter in the big schemes of things. It DOES matter! It matters to the kids that have no one else to turn to. Never forget that.  Here’s just a few examples: 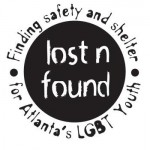 Since the conception of Lost N Found, they have helped over THREE DOZEN kids in the past three months. Here’s an report from Rick Westbrook a.k.a. Sister Rapture Divine Cox in their latest Facebook post:

The kids have come to us in all shapes, sizes, and colors. These youths are each special and incredible in their own way. They come to us not broken, but certainly with some damage such as walls built up, trust issues, and still in survival mode. Some have been abused, starved, neglected, or otherwise just thrown to the curb.

It is our job to take them in, clean them up, make sure they are fed, and then try to get them back to some semblance of normalcy. That is not always the easiest thing to do.

They have a problem understanding WHY, someone or an agency would want to help without anything in return. We explain that they belong to a community that may not have been homeless themselves BUT it is one that understands being treated like a second class citizen. We teach them that our little ole community values them as they are, and will do anything we can to keep them safe and out of harm’s way.

I have held kids that cried till they could cry no more, gone in the middle of the night to get them medicine when they were sick, talked to them about their hopes and dreams and how to make them possible.

The most rewarding moments are when you see the mood shift, when they’ve relaxed and realize that it is going to be OK and you see that FIRST smile. They then realize that they ARE loved and HAVE value.

I would LOVE to be able to show you pictures of them and tell each of their specific stories, but I am very protective of our youth. In the past I have shared their stories in general terms without specific names and will continue to do so.

The youths themselves each bring something different to the house and in most cases they act as a family, being very protective and nurturing of each other in spite of their differences.

We have taken calls, emails, and texts 24/7 from the metro area, and as far away as Mississippi, New Orleans, New York just to name a few. We provide any answers that we can and try to steer them in the right direction. We are a TRIAGE center, taking the youth in as soon as we can get to them.

Some left the program before we would have liked, but they moved on to the new chapter of their life with all the support we could provide. Some we have transitioned into other programs, depending on their needs. Several have found jobs and roommates AND I am happy to report that one is moving into their OWN apartment this weekend.

After they leave the program, we still take calls answering their questions about things they have never dealt with before or just to say thanks and keep in touch.

We have had a couple of training sessions for volunteers, that are then allowed to interact with the youth and assist the staff.

We have brought in different groups to have Dinner with the youths and allow them to interact with POSITIVE QUEER ROLE MODELS and it always works out great. It allows them to see that we are all different but have a common thread in the community.

We are doing good work and making a difference as promised and will continue to do so. It is YOU – THE COMMUNITY that has made all this possible with private donations, but the work is on going.

Donate  or volunteer :   Lost and Found 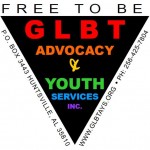 This post is from James Robinson, Founder and Director of GLBTAYS who was just awarded has been awarded the Billy Jack Gaither Humanitarian Award. The award recognizes an individual or organization that has “shown courage in the struggle against hatred and contributed to the creation of a just society” and was created in the memory of Billy Jack Gaither who was brutally murdered in 1999 for being gay. Read more: The Daily Home – Remembering Billy Jack Gaither.

“I have been thinking of what to say today in Montgomery. Last night I received a phone call from someone here in Huntsville. He told me that he has been beaten down and oppressed by his family, by the church he grew up in, and by our society throughout his life… He said, “I’ve wanted to do what you are doing but I’ve been afraid. I am not proud to say I live in Alabama but I do want to see it change.” He said, “One small voice, just like a candle in the dark, can carry a lot of weight.” He said … in a very quiet voice, “We need to fight, fight, and keep on fighting in a soft way.”

I think I understand what he meant by this because in order to change the hearts of people we must show them the love & kindness that exists in our hearts. He talked about Benjamin Franklin and the way he influenced France to support us in the Revolutionary War and he talked about Martin Luther King, Jr. … he told me how proud he is to know me and how excited he is by the changes he believes will happen now in Alabama because we are speaking up. He told me he would follow me anywhere and march proudly…He told me he had wanted for a long time to tell me how much he believes in me and appreciates me and that on the night before this big day he needed to tell me how important my work is and that he believes the things I say are extremely important …he asked me to watch this video and I told him I would before leaving today…Was this the man who have me his name or was this an angel with me on the phone? … or both…”