You are here: Home / Author Interviews / Gender Fluidity in Transgression

Friend and author Theo Fenraven stopped by to give us the scoop on his latest book Transgression. You can also read his original short story The Elevator only on this blog. 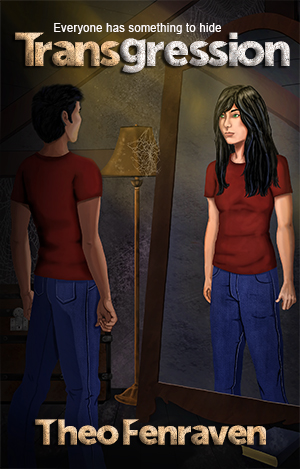 Last I heard, Facebook offers fifty-seven different gender choices when you sign up for an account. This change went into effect after I opened mine, so I went back and checked “gender fluid.” You’ve heard the saying, right? “Sex is between the legs, gender is between the ears.”

Most days, I am happily male, but there are others when I want to celebrate my female side by putting on something girly or painting my nails. There is makeup in my bathroom cabinet, and I enjoy wearing it. I can walk in heels, but I don’t like them and currently don’t own any. I do like how skirts let the air circulate between my legs. I’d wear them more often if society didn’t frown on it so much. Well, “frown on it” is putting it mildly, isn’t it? I’d get the shit beat out of me if I went out in public like that.

After all this time, it’s nice being able to label what I am, but at the same time, it’s not required. The label, or lack of it, doesn’t change who I am, and I’ve always known I travel freely along the gender curve.

I announce being gender fluid carefully, choosing who to confide in, never knowing how it’s going to be received. Most people don’t know what it means, and I have to explain. They almost always look puzzled, then usually change the subject. “Hey, what’d you think of the game Sunday?”

I’m exaggerating. It’s unlikely I’d ever tell a football fan I’m gender fluid. At the risk of repeating myself, I’d probably get the shit beat out of me. Bloody noses and black eyes aren’t a good look for me. Why take the chance?

And that doesn’t bring me to the topic of discussion, which is my book Transgression, but let’s talk about it anyway. I first published in the m/m genre. I’m comfortable there, and I’m pretty good at it. I know and understand men, and I like writing about them.

So when a character named Sky Kelly popped up in my head one day and insistently whispered sweet nothings in my ear, I ignored her. I’m not ashamed to admit the thought of writing a female, and a male-to-female transsexual to boot, scared the shit out of me. I knew nothing about transgender people, and I was afraid I’d let Sky down, not understand her well enough to do her justice. Zach, the male bisexual? I “got” him right away. I knew what motivated him and how he felt and what was important to him, but Sky… lovely Sky was a mystery.

I kept telling her to go away. I never got mean or rough with her because hey, she’s a lady, but turns out she had balls of steel. She wouldn’t leave me alone, so I started doing some research. Just looking around, ya know? And I got more and more interested in telling her story. I’ve also learned I do my best work when I’m scared to death. I guess it’s the challenge. I’m always up for learning something new, especially when it makes me want to run away.

So I took her on, wrote her story, and didn’t regret it for a moment. Tapping into my gender fluidity helped. The more I wrote the character, the more I “got” her. I’m pleased with the result and hope you will be, too.

His acting career is taking off. Public recognition is picking up. Now more than ever, he understands how key reputation is to his success. But his relationship with his co-star, Kris—arranged around publicity rather than genuine feelings—is suffocating him. She once understood his needs, but her demands are beginning to grate with every shrill order she gives.

Zach has a secret. The breakout star of a new medical series, he’s been hiding his orientation from co-stars, friends and family, the studio, and his fans.

On the recommendation of a friend, Zach seeks out Sky Kelly, a well-connected herbalist whose concoctions are natural magic, as is her stunning beauty. On the surface, she has it all: her own house, a thriving business, and good friends, but the things she had to do to get there are a time bomb ticking away, and when it goes off, she’ll be teetering on the edge of a chasm that can put her right back where she started.

Sky has secrets. Like, she’s got a Y chromosome and the original equipment to go with it. Like being a highly paid escort. Like, if Zach is seen with her in public, it could ruin his career. Like someone becoming so obsessed with Sky, that obsession threatens them both.

Secrets… everyone is hiding something, and instead of finding The One, it could be The End.

Theo Fenraven happily lives in south Florida, where it is hot and sunny all year long. Connect with him on Twitter.