You are here: Home / Author Interviews / A Message of Hope from Author Ross McCoubrey

B: One Boy’s Shadow is about coming of age and coming out but only in a small aspect, you told me it’s more of a paranormal ghost story, is that right?

R: Yes, that’s true. The main character of the novel, Caleb, is a young man who moves to a new home in rural Nova Scotia from the city of Halifax. He learns that 60 years ago a boy roughly his own age disappeared from the property. He becomes intrigued by the stories after he hears a voice calling his name in the woods.  He begins to delve deeper into the mystery and, in the process, learns to accept himself and be strong.

B: So the book is essentially a YA LGBT book? What kind of message are you hoping it sends to the kids that read it? 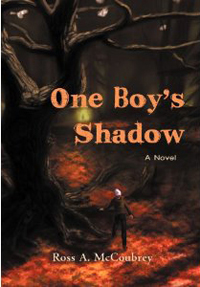 R: My main message is one of hope. If just one person can read the novel and feel that they aren’t alone, that tomorrow is possible, then I will have achieved my goal. I really want parents/guardians to read it as well and potentially gain a better understanding of what a young person might be thinking and feeling.

B: I see accolades coming in fast and furious about the book on your Facebook page. Knowing that every book sale could be the difference for an LGBT Youth, how does that make you feel and what prompted you to make that offer in the first place?

R: I feel encouraged to get the word out about my book so that its sales, and its story, can help in bettering the lives of our LGBTQ youth and their allies. What prompted me… When I was growing up, I didn’t know anyone else who was gay or who was going through what I was going through. There were no organizations or resources, at least none that I knew of, that were directly related to supporting LGBTQ youth. To have one as motivated as The Youth Project and seeing all the good work they do, it was an easy decision to help them help our youth.

B: You live way, way out in the boondocks, what Americans would think of as a ‘country boy’ doesn’t even begin to define your area of the world. Can you tell us how that kind of rural environment affects you as a gay man? And I ask this because it’s very different here in the States where, when someone says country we think of Southern or Midwestern states where homophobia runs strong.

R: I actually live in a small community of about 300 people along the Bay of Fundy. I commute to work in a town of 1800 people (which is about a 90 minute drive to the nearest city – Halifax). I don’t get the opportunity to meet many openly LGBT persons in my day-to-day life so I often feel a sort of disconnect. I’ve had a few incidents over the years of bigoted comments or actions towards me but they are the exception, not the rule. I’ve had a number of people tell me that I have changed their attitude about gay people simply by my being myself. I hope that, in some small way, I can make it easier for the next person.

B: What’s next for you? Are you working on anything new, and when should we expect to see it?

R: I am working on my next novel, which is not a sequel to One Boy’s Shadow (though I have been asked more than once for a continuing story). I’d like to say that it will be out by the end of next year but I know how long it takes to get a book completed while working a full time job and juggling other commitments. Writing tends to be a winter activity for me so I hope to get the bulk of the novel down, in its first draft, before the end of the season. We shall see.

B: I’m looking forward to it already.

You can find Ross on Facebook or Twitter, and find his books on Amazon, Barnes and Noble and on Indigo (CA).

If you are a LGBTQ author, artist or filmmaker and would like to chat , please feel free to contact me.