You are here: Home / Author Interviews / You Don’t Have to Be Gay to Like Gay Fiction

I’ve always been fascinated with things that cross genres. Cross dressers…cross culture…cross walks. No, wait. That last one. Never mind.

I’ve always liked to mix things up a bit. For instance, I’m not a country music lover, but I like Carrie Underwood’s music—and, of course, what gay man doesn’t love Dolly Parton?

When it comes to reading, I’m also diverse. My Kindle is packed with everything from sci fi to romance to personal growth to books about books. Oh, and you’ll even find some straight novels in there. “Well, of course,” you might say. “Most books involve heterosexual characters—mirroring life. Why shouldn’t it?” But, what about the other way around? Straight people reading gay books? Here are a few reasons why you don’t have to be gay to read gay fiction.

Recent polls show that 56% of Americans favor gay rights, including gay marriage. While there are still hurdles the LGBT need to clear, we’ve come a long way. “You’re so much more cultured than my straight friends,” one of my acquaintances recently told me. Who would have known that hanging around gay people could be so trendy? Well, us gay people for one, but that’s beside the point.

Even though you may not identify with a character’s sexual orientation, that doesn’t mean you can’t be entertained—or learn something new. A quality story—regardless of who’s banging who—wins the day, hands down. You may, after all, be surprised to find out how much you’re alike.

When I first started writing MM romance (male on male romance) I was astonished by the number of female readers, as well as writers. My mailing list alone is 55% women. I don’t ask my members their sexual orientation—it doesn’t matter.

I love the contribution women have made to gay fiction. It has given balance to a genre formerly known for stories lacking plot, and ripe with too much sex. Out of context eroticism—whether gay or straight—can kill a decent book. “I skip through the sex,” said one reader—from Goodreads’ MM Romance Group—in commenting about erotica in romance. She went on, “It’s about what the characters feel for each other, not what they do in their pants.” 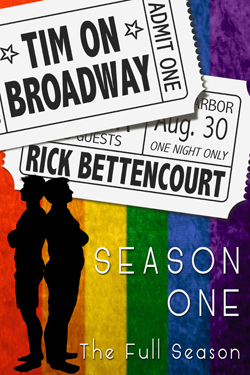 I find it’s always good to take a walk in someone else’s shoes. You learn so much. What’s it like to love someone, but not be able to show it because of how you were raised? How does one deal with a deep, dark secret they’ve held most of their life? Or—as in my latest book Tim on Broadway—simply discover the joy someone finds in meeting their favorite theater idol.

It’s no secret that the arts industry is filled with LGBT. Why? We have a tendency to be creative, and we’re pretty damn good at what we do. Like you don’t have to be gay to support gay marriage; you don’t need to sleep with your same-sex friend in order to enjoy a good, gay book.

Rick Bettencourt lives in the Tampa area with his husband and their dog, Bandit. Rick has written several books, including Not Sure Boys—which was nominated Best Book of the Year for 2013 by the MM Romance Group, the thriller Painting with Wine, and most recently Tim on Broadway—which reached #1 on Amazon’s gay fiction, short reads in its first week of release. You can follow Rick at rickbettencourt.com.