You are here: Home / Gay Nonfiction / 21 Gay Writers talk about The Other Man 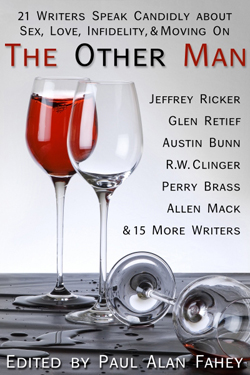 I immediately sent out invitations to some of my favorite male writers and asked them to contribute to the anthology. In the process, I discovered that writers either had an other man story to tell or they didn’t. It was that simple. Eventually I had a strong list of contributors and we were off and running. By early 2011, I had written a detailed book proposal, acquired an agent, the wonderful Jill Marsal of the Marsal/Lyon Literary Agency, and had a complete list of contributors attached to the book.

If I said the road to publication from this point on was an easy one, I’d be lying. It wasn’t. There were bumps and detours ahead. Jill shopped the proposal to small publishers open to LGBT work. After a year, we had one interested publisher who kept us hanging until they decided against the book because one of the editors felt the reading public, and gay men in general, wouldn’t be interested in the topic of the other man scenario. Hmm. Crazy, I know, but like I said, the road was pretty bumpy.

In the interim, JM Snyder, of JMS Books, published my first e book novella, The View from 16 Podwale Street, a lesbian historical romance, and immediately said she was interested in publishing The Other Man, especially with the It Gets Better charity sharing in the profits. In May 2013, The Other Man became a reality and was released as an e book and also in print.

Last year our book won a 2013 Rainbow Award for Nonfiction and was selected by the American Library Association for their Over the Rainbow Nonfiction List for Adults.

It’s been a great ride all the way. I’d love to talk more about our book. Please feel free to comment and ask me whatever you like. I’m looking forward to hearing from you.

WHO IS THE OTHER MAN?

THE OTHER MAN is an artistic collaboration by and about gay men and their relationships. If you’ve ever been the other man, had him invade your life, or are just plain curious about this beguiling, unpredictable and dangerous creature, then this anthology of personal essays is for you. Twenty–one of our most acclaimed authors, many Lambda Award winners and finalists, such as Rob Byrnes, Jeff Mann, Tom Mendicino, Erik Orrantia, Felice Picano and David Pratt, write candidly about either being the other man, suffering the other man or having their relationships tested by infidelity. What they tell us is we must take heart, it does get better and one day our luck is bound to change. We’ll survive the bumps and detours in our relationships and weather the storms, or resolve to move on. Along the way, we’ll hope to meet someone new and simpatico, maybe even our long-awaited soul mate. Life will be good again. Or will it?

Purchase The Other Man from Amazon, JMS or Barnes and Noble.

Paul Alan Fahey writes for JMS Books. He is the author of the Lovers & Liars gay wartime series. Paul is the editor of the 2013 Rainbow Award winning anthology, The Other Man: 21 Writers Speak Candidly About Sex, Love, Infidelity, & Moving On. His first WWII novella, The View From 16 Podwale Street, published by JMS Books, won a 2012 Rainbow Award. Over the years, his writing has appeared in numerous literary journals and anthologies. He lives on the California Central Coast with his husband, Robert Franks, and three wild and wooly shelties. Visit him at