You are here: Home / Gay Fiction / The Boy with the Yellow Socks 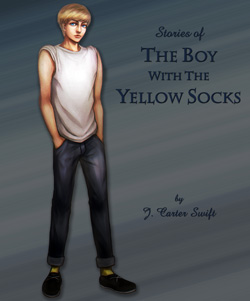 I was a boy of twelve the summer I looked out my bedroom window and saw my father standing in the front yard and my friend, who lived across the street, come toward him in a staggering walk that made me think he was going to fall with each step. My friend was a sixty-something bachelor, and many an afternoon I’d sat in his kitchen drinking lemonade and listening to him tell stories from his boyhood that always made me laugh. Finally, swaying on unsure feet, my friend stood before my father. “George,” he said in a drunken slur, “I want you to know I love that boy of yours. He’s the sweetest, nicest…” I didn’t hear the rest because I’d ducked down and covered my ears and said aloud, “Those are the wrong things to say to my dad!” I knew my friend was making a terrible mistake by the way my father had tucked his chin to his chest, the signal he was not pleased. In a short while the door to my bedroom opened, and I didn’t look, pretending to be searching for something in my desk. My father said, “No more going over to his house.” I remember all too well the squeezing in my chest, and, when I didn’t respond, I remember the way my father raised his voice to say, “Did you hear me?” It was then that I uttered one of the most painful words I’ve ever uttered. “Yes,” I said.

Decades later this episode inspired my short story “Glass of Chocolate Milk.” It took quite some time to write, as normally everything I write does. Understand that I refuse to allow time to be a factor when I write, to allow time to bully me into cutting the grass or go shop for groceries. This lack of respect for time allows me to lose my anxiety and relax. I’ve learned that to be more creative, only takes more time. A friend proofreads for me, and at first when she inquired about the status of a story she’d read and I answered “I’m rewriting it,” her response was “You’re really quite looney. That story was good.” She doesn’t say that anymore, having seen what leaving time out as a factor can do for a story. She’s also come to know that “Good” isn’t my goal.

So, after months of writing and rewriting, “Glass of Chocolate Milk” was completed. Yet, there was someone who objected. Not that this someone was disappointed with the way I’d told the story, he was just insistent that he wasn’t through telling me all the stories he had to tell. This mightily disappointed someone was Jan, my main character. He was quite persistent: “What about the bank robbery? What about my friend Walter who lives in a refrigerator box? What about the baseball glove that changed my life, the fight in front of Ben’s super market, and Dylan? How can you tell the story of me without telling them about Dylan? You’ve even left out the murder!” Jan became so familiar, so much a part of my everyday thoughts, that if he’d walked in my front door I would’ve only said, “Grab a Coke from the ‘fridge’ and join me in the library.” Jan’s persistence is how “Glass of Chocolate Milk” took its place as the third story in the series of nine stories that comprise my book Stories of The Boy with the Yellow Socks.

The next eight stories were completed in ten months, a pace unprecedented for me. I’ve only published one other novel and seven short stories in my life, and unfinished in my desk drawer are two novels that require time. The rapidity in which I wrote these eight stories I owe to Jan. He told me his stories with such clarity of images and emotions that rewriting the rewrite of the rough draft was a minor effort. Welcomed was Jan’s help, for I paid a price on many occassions for not allowing time to be a factor. One night I stopped writing in the small hours and went to bed because I felt so ill. Lying there in the dark, weak and with a queasy stomach, I suddenly remembered I hadn’t eaten dinner.

Jan told me of a boy who, though abused and bullied, never loses his greatest gift, his gift of gentleness. With this gift, Jan ultimately not only rescues himself, but also rescues the broken and needy people around him. When it comes to super heros, Jan might be the gentlest there ever was, and the first to proudly wear yellow socks as his emblem. While telling his stories, Jan delighted me in the way he described the people, places, and animals in his world. In the story “Barney Blacker,” using all the charm of a teenager, Jan gives this visual of Willie Bing:

“He could have been Mary Shelley’s Frankenstein, a monster made up of mismatched parts gathered from a graveyard and pieced together by a mad doctor. His cheekbones poked out like elbows. And those ears! They reminded me of small hands with fingers curled tight. I looked for the bolts in his neck, the stitches that held him together.”

In “Heros & Villains” Jan describes the scene as a champion thoroughbred approaches the track for an early morning ‘work’:

“As if controlled by a single mind, everyone’s head turned. There was Cruiser coming up the pony path. The air around him seemed to pulse with energy, and as he stepped gracefully along the sunlight struck his black coat and made him radiant.”

In the story “Bean Soup,” Jan uses his eye for beauty to make memorable the simple act of walking up a sidewalk:

“I walked up the sidewalk to Jacob’s house. On the porch railings were geraniums growing in clay pots. The red flowers seemed to burn, each blossom a little fire.”

The reader learns in the first story, “The Baseball Glove,” that Jan is a sensitive, intelligent boy, and in the story “All But One” the reader learns he’s also brave. Jan’s pastor has discovered he’s gay:

“No heretic-hunting inquisitor time-traveling from the 13th century could have scared me more than Pastor Charles was at this moment. If soldiers, flashing with armor and swords, had suddenly appeared to drag me off to burn me at the stake, it wouldn’t have surprised me. But I couldn’t let him say such things about Dylan unchallenged. My voice climbed to a near shout:

In my referring to Jan as a real person, I’m sure many of you think professional help is in order. But how can a writer make the reader believe a character is real if he doesn’t believe it himself? It’s Jan’s heart, not mine, that pumps life into this book, and it’s Jan’s soul, not mine, that gives this book depth and meaning. To me, Jan will always be real, the boy who pestered me into writing a book, and nowhere among my words is Jan’s reason for wanting this book written so clearly stated as in a conversation he has with Kelly, a girl jockey, who has no idea he’s gay. The conversation takes place during the summer Jan’s father sends him off to the race track where he believes hard work around race horses will make a man of him. Kelly has earlier caught Jan talking to the flowers he’d been watering outside the horse barn where he works:

“Writing must be a lonely thing to do. Just you all alone with a pen and pad of paper.”

“Because there’re things I want people to understand.”

“Like they don’t need to be afraid of things that are different.”

Kelly grinned. “Like a boy who talks to flowers?”

Now you know why Jan wouldn’t leave me alone after I’d written “Glass of Chocolate Milk.” He knew it wasn’t enough. When you read Stories of The Boy with the Yellow Socks you’ll understand just how much Jan wanted to share. And it probably won’t surprise you to know that Jan’s with me here, right now, and he has a message for all those who are suffering abuse and bullying. He wants me to tell you to hang on, stay strong, and that to be gentle, in a world that often isn’t, is to be brave.

J. Carter Swift is the pen name for Stan D. Jensen.  Mr. Jensen received his bachelor’s degree in history and his master’s degree in education from the University of Northern Iowa.  His first novel, Ethan’s Peach Tree, based on the American Civil War, is available through Amazon and Barnes & Noble.   His short stories have been published in the magazine The Backstretch.  His new book,  Stories of The Boy with the Yellow Socks, represents his desire to make a contribution to the LGBT community.