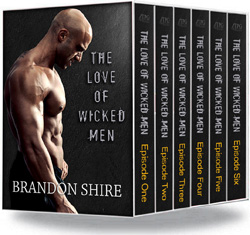 The paperback edition of Season One of The Love of Wicked Men is  ready for shipping.

The e-book edition will be out on June 12th. Just seven more days!

What are reviewers saying about it?

“This story is non-stop in its intensity… the literary equivalent of mainlining adrenaline. Loved every moment of it.” – Prism Book Alliance

“Shire has surprise mastered and we definitely reaped the benefits of that throughout this serial.” – 3 Chicks After Dark

“It’s the writing that sets this apart. Shire is a story builder. He shovels around intrigue, layers on some gritty dilemmas, and places each brick so solidly that you don’t even see where you’ve taken your misstep. Be wary of that whiplash effect, because there is going to be more than one incident of, “I didn’t see that coming!”  – Attention is Arbitrary

Pre-order the e-book from:

Amazon, iTunes , Kobo, ARe,  or from Gumroad: epub  mobi