You are here: Home / Author Interviews / Make Do and Mend 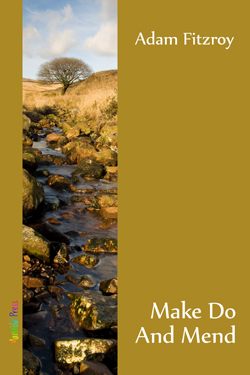 Some authors prepare meticulously when they begin to write a new book, knowing in detail from the outset precisely what will happen to whom and in what order.  Personally, I find this approach dampens creativity, and I prefer to take the journey alongside the characters; I will usually know something about the people and their story arc before I start a book, but the way it develops can often surprise me.  It’s also usually the case that I have to wait until I’ve finished a book before I can look back on it objectively and say with any hope of certainty exactly what the story is about!

With MAKE DO AND MEND, the initial intention was to describe a growing intimacy between Harry and Jim which would be set against a background of some sort of conflict.  In the preliminary sketches for the book the setting was to be the present day and the conflict with land-hungry neighbours who threatened the family’s farm.  (This aspect of the plot later found a home in THE BRIDGE ON THE RIVER WYE, which was published earlier this year and which takes place in a very similar geographical area – waste not, want not! – but there the similarities end.)  However a sudden inspiration struck, of unknown origin, and convinced me that relocating the action of the book to the middle of the Second World War would make it all very much more interesting.  That way the grit of conflict – which every book needs – could be supplied not so much by the war itself, nor even by the difficulty of maintaining what in those days would have been a highly secretive relationship, but by Jim’s status as a conscientious objector.

I know some people think I may have been influenced by Mary Renault’s THE CHARIOTEER in this respect.  This is immensely flattering, of course, but in all honesty I read the book so long ago that the only thing I remember about it is that one character was called ‘Laurie’.  I was actually thinking more about Private Godfrey in the TV series ‘Dad’s Army’, who had been a ‘conshie’ in the First World War but who had nevertheless distinguished himself as a volunteer ambulance driver on the battlefield – for which he later won the reluctant admiration of his Home Guard platoon.

It has always seemed to me that conscientious objection must be a very difficult position to hold.  Individually we might well be in favour of peace and diplomacy, but “when the blast of war blows in our ears” there is usually some kind of mass patriotic effusion which paints anyone who dares to express an opposing – or even a slightly less committed – opinion as either a scoundrel or a traitor.  With Jim, I wanted to be able to portray a character who loved his country enough to support it in his own way, but who did not necessarily approve of the methods it adopted.

In this context, by the way, it’s important to remember that the true nature of the horrors perpetrated by the Nazi regime didn’t become common knowledge until much later.  Throughout the war even perfectly intelligent people were capable of believing that the rumours of atrocities they had heard were in fact some sort of ‘black propaganda’, part of what we would now call an insidious media campaign; the actual truth was so far beyond the imagination of most normal people at the time that even if they had heard such stories they would have been likely to discredit them.  As humans, we have a tendency to dismiss as fiction anything we don’t completely understand or even believe to be possible – a trait which has sometimes prevented us from making progress that we should have a great deal sooner.

So, while in retrospect Jim’s position may look hopelessly naïve, at the time it would have been one which required considerable courage and personal conviction to maintain; that was the conflict I found intriguing, not least because it has such obvious similarities to the historic situation of gay men.  It takes some strength of character, after all, to admit that one is not like everybody else, and to be prepared to shoulder the consequences.  If the majority all seem to think and act in the same way, being the exception can vary from uncomfortable to downright dangerous – as those who stand out from the crowd have often discovered.  My interest is in people who are prepared to hold firm against pressure to conform, and who – sometimes loudly, sometimes more quietly – continue to attest what they believe in, even in the face of apparently insuperable odds.

In a way, therefore, Jim in MAKE DO AND MEND is not only someone I would very much like to meet but also someone I hope that – if I was facing a similar set of circumstances – I would have the courage to be.  His journey was not at all the one I was expecting to take when I began the book, but it’s one I was glad to have had the opportunity of exploring – and one which, I hope, will have raised a comparable series of interesting speculations in the minds of the book’s readership.  If that is indeed the case, then Jim and I will have succeeded in what – all unknowingly – we both set out to do.

Imaginist and purveyor of tall tales Adam Fitzroy is a UK resident who has been successfully spinning male-male romances either part-time or full-time since the 1980s, and has a particular interest in examining the conflicting demands of love and duty. You can connect with him on Twitter or his blog.