You are here: Home / Author Interviews / Lessons of Love and Pain – Interview with Author Coffey Brown 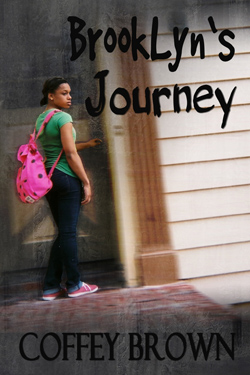 CB: I wish I had an extremely creative answer for this but I’d be lying if I gave you one. I’ve liked the name Coffey since seeing the movie Green Mile. I was going to go with Coffey B. but decided on Brown when I was completing the copyright application online. It had a cool vibe to it. Stacey Pierce, not so much.

B: “How do you love someone before you even meet them?” This line kind of struck me because teens tend to do a lot of external projection with their emotions, especially when it comes to filling in their own spots of angst and longing. How do you think BrookLyn’s Journey helps lesbian teens fill those ‘bare spots’ in?

CB: Teens overall are sometimes forced to fill in the bare spots because they tend to think they are the only one going through what they are going through. Especially when there is no one to identify with. Add sexuality issues to their problems and it further isolates them. It’s a scary place to be. BrookLyn’s Journey allows them to see that no matter what they go through, life does get better. BrookLyn knew because her siblings got out that she could, but it didn’t lessen the fear of trying to leave. Gabby helped her fill in the spots and she was able to evolve from the madness instead of harming herself. BrookLyn escaped to a better situation.

B: You’re a social worker and one of the most poignant points in the book is Brooklyn’s embarrassment at having been an abused child and how upset she was that she revealed the ‘family secret’.

CB: I have worked with young children, teens, adolescents and adults in different settings. What I have found to be consistent regarding abuse was embarrassment. Some people that have been abused generally feel in some way that the victimization was warranted because of something they did.  Especially kids. They become embarrassed to tell their story thinking it’s a reflection of them rather than the abuser.

B: At one point Gabby asks “I want to take your pain away. Can I?” Do you think that it’s possible to take someone’s pain away with love?

CB: I absolutely do. When you love someone unconditionally you become a light in his or her life. You love them while teaching them to love themselves. Some people need that and have never had that. Your love builds them up. What Gabby did was restore BrookLyn’s self image resulting in self-empowerment. Some of the pains of childhood will never be forgotten but BrookLyn’s growth came out of Gabby’s love. That love lessened and erased the pain.

B: Your cover art is great, and I understand it was important for you to have an African American on it, why was that?

CB: The young girl on the cover is my niece. She was very courageous for being on the cover and never wavered when we discussed the fact that the issues would be related to sexual identity. It was important to have an African-American teen on the cover because that was the truest reflection of BrookLyn. I would’ve been untrue to the story and myself as an author, if she were not of color. That would have been a disservice to my readers and the African-American community. The message would’ve been negative had she been a Caucasian teen with blonde hair and blues eyes. This book is to teach teens to love themselves and if I hadn’t chosen someone to truly reflect BrookLyn it would’ve been a big contradiction.

B: You said that you want to get into schools and colleges and talks with teens. What’s your message for them if you’re offered that opportunity?

CB: My message is diversity and self-empowerment. This book does not encourage homosexuality and discourage heterosexuality. My goal is to be the voice letting teens know that life is not over because you identify as gay, lesbian, bisexual or queer. Love is love and I don’t want them to hate themselves because someone mistreats them due to their sexuality. I want to be for them what I did not have growing up.

B: What can we expect from you next?

CB: You can expect YA and adult LGBT fiction and motivational/spiritual books from me in the near future. My next book, The Awakening of Graye Moon, is LGBT YA fiction and is due out this month.

B: Great, something to look forward to.

You can find Coffey Brown on Coffey Brown Books, Facebook, Twitter, her blog and find her books on Amazon. She also loves to interact with readers and can be reached at: (coffeybrownbooks [at] gmail.com).

If you are a LGBTQ author, artist, or filmmaker and would like to chat about a little more than standard interview questions, please feel free to contact me.