You are here: Home / Lesbian Fiction / Jane’s World: The Journey from Comic to Novel

POV (point of view) is something I don’t think much about when I write comics. Basically, you just draw a circle around the words that a character speaks and then point to the person talking. POV is clear and easy to follow in comics. Or at least it should be. As I began the process of transitioning my “Jane’s World” comic to an actual novel, I realized POV was a bit more complicated. This is just one of the many things I’ve been getting my head around as I prepare the manuscript for Jane’s World: The Case of the Mail Order Bride, due out in June 2016 by Bold Strokes Books.

This may sound silly, but it never dawned on me just how much I rely on my comic’s illustrations to convey subtle emotional shifts, context and tone. Now when a “Jane’s World” character suddenly feels unsure of themselves in the novel, I have to describe that in words. My thesaurus is getting a workout for sure. Most of the time, I even go as far as to sketch a character so that I have a visual in my brain as I write. 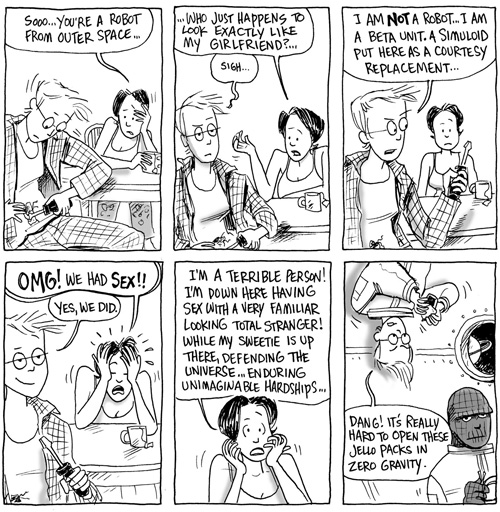 Someone might ask, “Then why not just do another graphic novel instead of write a book?” I guess the answer is that I think I’ll be able to take my “Jane’s World” characters to a depth of story that I haven’t been able to achieve yet in comic-book form. Granted, some comic books deal with serious stuff, but “Jane’s World” has always been a comedy. It will remain a comedy even in prose form, but I’ll be able to go a bit deeper into the psyche of each character and actually write sex scenes. Something I’ve been a bit too bashful to actually draw in the comic! Yes, folks, after more than 11 volumes of “Jane’s World,” Jane will finally get to have sex.

I mean, Jane has had sex in the comic, but it’s implied or the panel fades to black. The comic runs daily on GoComics so there are certain editorial lines I cannot cross. I discovered one of those is naked, make-out scenes in the shower. But also sex scenes are a big no. In addition to that, the “F” word is off-limits. You also can’t say “ass,” as in, “Get your lame ass to work.” Lame butt just doesn’t have the same ring to it. 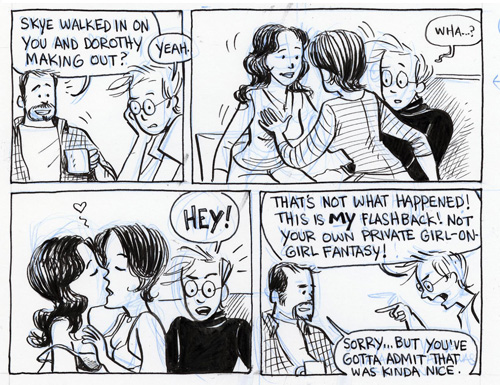 In some ways, I guess my reason to write a “Jane’s World” novel is so that Jane can do grown-up things and break through that PG-13 barrier imposed by mainstream syndication. I’m looking forward to taking these characters to the next level and letting them spread their wings.

Jane’s World: The Case of the Mail Order Bride

Jane’s PayBuddy account gets hacked and she inadvertently purchases a mail-order bride from Transnistria. Jane doesn’t realize she’s about to embark on her honeymoon until the bride, Natasha, shows up on her doorstep, with luggage. Jane’s roommate, Ethan, can’t stop drooling over sexy Natasha. Luckily, after the demise of the local newspaper, Jane has just taken a job at the public library where she has lots of coworkers smarter than she is that she enlists to help her figure a way out of this accidental marriage. Natasha believes if she can get Jane to consummate their marriage that, according to California’s new state rulings on same-sex marriage, she’ll be a US citizen. But is that all she’s really after? Or does true romance begin to bloom between Natasha and Jane? If Jane’s part-time girlfriend, Dorothy, has anything to say about it, the answer is no!