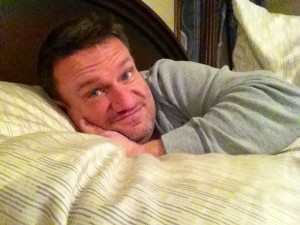 Some of you may recognize Mr. Allen from a previous post. He’s an outstanding author, a good friend, and he has a new bestselling book out about fatherhood which we’re talking about here today.

B: Welcome, Greg. It’s a pleasure to have you back on the blog.

Greg: Thanks, I’m really excited to be talking to you about my latest book COOL SIDE OF THE PILLOW. You’ve always been so supportive of my work and I really appreciate that.

B: Cool Side appears to signal a change for you. Can you tell me about that?

Greg: I remember when I first started writing; I thought that all of my writing needed to be deep and meaningful with large ‘lessons’ and themes. My memoir about my brother dying at 34 years old, my book that deals with praying away the gay: strong stories. Then I realized that I simply loved telling stories that might veer off the path from where one believed it was leading. Share diverse stories of people going through adverse times and perhaps readers may identify with the themes being told. Sometimes gay characters, sometimes not. My novel Patchwork of Me was told all through the 1st person POV of a woman (though she did have some gay friends in her ‘mafia’), but my latest…well I’m branching out.

B: What’s Cool Side about?

Greg: This story is about a man’s desire to find that thing in life that calms him, the way we do at night when we flip the pillow to the cool side. From the outside – this guy has it all. The beautiful home, the successful wife,  plenty of money, the smartest four year old one could ever meet: but as a stay-at-home dad and with his son starting preschool – he feels he has lost himself and doesn’t know what to do with his life to define who he is in all the trappings around him.

I’m all about reinventing one’s self at any point in our lives. I’ve done it over and over from being an actor, to climbing the management ladder in corporate America to switching to that of an author. I believe people shouldn’t get ‘stuck’ in life, but find something that inspires them, makes them happy and can say “ahhhhh…..that is so cool and calming and I’ve found some peace from it.”

B: This sounds like it would resonate with more than a few of us. Tell me a little about the characters.

Greg: My protagonist Zach Kleinmann is in his 39th year when he befriends an eccentric older woman who runs a children’s theater company when he takes his son to see a show at the local library. I was in that world for much of my early adult life. Doing fairy tales and kids shows at schools and libraries. Touring the country as a Teenage Mutant Ninja Turtle. I even started my writing career in children’s theater. I ‘get’ that world and how it can make people feel young at heart no matter their age. And let’s face it…theater people can be wild and freaky to those not in that world. So by dropping my protagonist down in the middle of it all, it’s as if he is Alice falling through the rabbit hole.

The older actress is a cross between Little Edie in Gray Gardens and Mia Farrow from all of her early work. A little kooky. Very giving. And yet has many secrets from her past that Zach feels drawn towards. As an only child with deceased parents he sometimes longs for a mother figure and yet at the same time, sees the character of Ginger much younger than she actually is. So the book really delves into the question of can a man and a woman actually ‘be’ friends while it also deals with marital and parental issues.

B: Have you gotten any reaction from it yet?

Greg: Early readers of the book have felt there is something in this for everyone: those that love theater; those that enjoy getting taking away in a contemporary story; those that may be questioning changes in their own life as Zach grapples with that himself.

Even if the reader isn’t a parent or married, I believe many people will relate to that feeling of: what is my purpose? What do I want to do with my life? I’m only turning 40…life isn’t over! After all…isn’t that part of our jobs as fiction writers? Entertain AND have readers question their own lives?