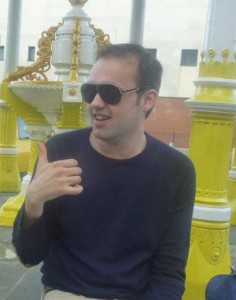 Welcome Gareth Russell to the blog. For those of you unfamiliar with his work, Gareth is an Irish YA author, published with Penguin and MadeGlobal. He is also a historian sought out by the media and is working on a third novel and a nonfiction book on the history of British royalty.

Welcome to the blog Gareth. Can you tell us a little about your Popular series?

Thanks for having me. The “Popular” books are a 6 book series with a comedy-drama theme. Two of the books are now published. The gay romance between Blake and Cameron, two of the central characters, is one of its main story-lines and I plan to have it run through all 6 books. Their storyline is in some way about portraying a hopeful or optimistic depiction of teen homosexuality. I hope ultimately that it’s a story of love that everyone can invest in.

The book is set in Ireland, which you said was important, could you explain why?

I also thought it was important to show a more sophisticated and tolerant side of modern Northern Ireland, rather than the depressing stereotypes that seem to dominate so many media treatments of life here. I wanted to show a romance that had a universal appeal, too; two inherently likable, although by no means perfect, young men who are perfect for one another, but who end up suffering a great deal of senseless pain and angst because they aren’t able to properly identify their initial feelings for one another.

So readers of the blog understand; this isn’t a typical gay romance novel. Can you explain how and why that is?

There are astonishingly swift changes taking place in Ireland today – by which we can see homophobic bullying decreasing and increasingly normal lives for gay teens, particularly in more affluent or urban areas of the country, like south Belfast, where the story is set. So I touch on the differences that class can make to coming out for modern teenagers in Ireland – the more upper class Cameron struggles less than the middle class Blake. There are also other storylines within the series that are not LGBT and I hope that shows how quickly a life like Cameron’s is merging with those around him, like Meredith, Mark or Imogen.

When can we expect to see book three?

Book three will have a lot more drama, particularly when the characters of Meredith and Coral. You’ll also see Cameron and Blake’s relationship begin to finally play out in a more mature way. This is the book in which they really begin to take off.

Excellent. You can find Gareth on the Popular website, on Twitter and find his books on Amazon.