Some of my readers may not be familiar with you Brian, please tell us a little about yourself.

Thanks for the invite Brandon, I’m glad to be here. I lived for three years in Manchester where I got my MA in Novel Writing from The University of Manchester. I teach writing and literature in New York and Ohio. I am a big pop culture junkie; I love fashion, music, art and literature. Creativity fuels me – always has. I am a very private person though my effusive personality might suggest otherwise.

One of the things I like about your writing is that you don’t seem trapped in any particular genre. Any thoughts on that?

I’d like to think I am somewhat of a renaissance man when it comes to writing. I write what inspires me. Because of the gay erotica, a lot of my publications fall into the gay genre, but my other short stories like the three found in my mini collection I Voted for Biddy Schumacher do not. Not all the novels I write will be centered on gay characters.

I sense a shift in your writing, is there a reason?

I have been working on this novel for many years, so I don’t think of it as a new book or a new work, but rather a primary work. I wrote and published short fiction while working on the novel. That was a way to get my writing out to people and to explore my craft. My main focus has always been on novel writing. For a period of time I wrote and published gay erotic short stories. I never intended to get into that genre, I sort of fell into it. I discovered I was good at it, was able to get published in major anthologies, and make some money doing it. Writing erotica was never my career goal and I knew that I would move past it one day.

Can you give us a little insight into the story besides what’s in the blurb? 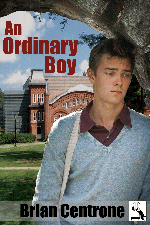 An Ordinary Boy is about finding out who you are in this world. The main character, Tom, is lost. His identity has been created by his parents, family, and even his best friend, Marissa. Tom looks at everyone around him to try and figure who he should be when he really needs to look inside to figure that out. The novel also focuses on how the LGBT community looks at each other. There is a lot of division in our community and I wanted to explore that issue. There is an idea that there is the “right” kind of gay and those of us who do not fit into this mold often feel ostracized from our own community. This is reflected mainly through the members of the college’s LGBT&F Club. A major theme in the book is love vs. lust. Tom experiences first love over the course of the novel, but being 18 and horny, he is also confronted with desire and attraction for other guys. Tom finds it amazing that Marissa can be so free with her sexuality when the thought of finding a guy (other than his boyfriend) hot terrifies him. Is that cheating? Does that mean his love for Matt isn’t real or strong enough? A big idea I wanted to incorporate into the novel was the naivety a lot of young men have when it comes to sex. There is a rise in unprotected sex among young gay men. I am not sure if that is because there is a lack of education about sexual health, or if the threat of HIV/AIDS doesn’t seem a reality to them. I’m not heavy handed about this issue in the novel, but I did want to draw attention to the fact that there are times we all make bad choices and that those bad choices may have serious consequences. Tom has to face a similar crisis in the novel and I wanted it to reflect what is happening currently in our society. To further that idea, Tom faces many challenges where he needs to figure out the right and wrong choices. Having the novel set in college allowed me to explore the notion that we expect to send our teenagers away to school because they are now adults and that they will make adult decisions. The reality of the situation is that first time independence is not always the gift we think it is. There is a serious learning curve and mistakes will be made, but we learn from those mistakes, and I’d like to think my characters learned from theirs.  Family is a major part of the novel. Tom’s family is wealthy, his grandparents are famous and he has been raised in this picturesque world. There are so many expectations placed upon him by both his parents that he can’t help but falter. We also see how some of the other characters are shaped by their families as well. I believe family plays a major role in whom we become and why. This novel really explores the strong hold and bad influences family can have on us. With all of these themes, ideas, and concepts, the reader is taken along the journey with Tom has he tries to discover who he is. The big question is, does he discover who he is? And if he does, what finally makes him figure it out? Though there are some heavy aspects to the book, it is also very funny. Readers should expect to laugh. Tom’s mother, his grandmother and Marissa are all power house characters who bring the laughs time after time. There are additional elements of fashion and art, theatre and pop culture sprinkled throughout the book, all of which are interests of mine.

Is there another project on the horizon or a sequel perhaps?

My next project is a collection of my erotic shorts. New Lit Salon Press who published my mini short collection, I Voted for Biddy Schumacher, will be publishing the erotica collection. The book will bring together all five preciously published stories plus two new stories to round out the set. Once that is out, I expect I’ll start work on my next novel. It’s not a sequel, but there will be a connection to An Ordinary Boy. We actually see a small part of the second novel during the Fashion Week scene. I don’t believe I would ever write a sequel to any of my books, but all my novels will somehow be connected to each other.