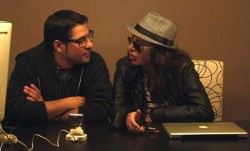 Let me tell you about their film first. Prince & Ekaj hits on so many levels it’s not even funny. This is not some lame Glee view of what it means to be LGBTQ but a hardcore look at what it is to be growing up Latino, gay, and homeless in the hard city. (You can see the trailer below and a longer clip on their website.)

B: I know you both produced this, but Cati you wrote it, what was the inspiration here?

C: I’m a Mother, I’m Latina, I was married to a powerful family in the U.S. and I come from a very humble single parent family. Because of my background, I have always sided with the under dog. I understand what it’s like to fight against all sorts of stereo types. It motivates me, it drives me, and it breaks my heart. The main inspiration for making this film was seeing the guts of this young kid I had met, and him refusing the great opportunities offered to him to become a successful model, for the mere fact that it might change or misrepresent who he wanted to be or who he was evolving to be. As I became closer to him, I realized that there was so much to learn from him. This was my reason to begin writing the script.

B: What’s your end goal with this film? I know one of your goals is to get it translated into four different languages. How do you expect this to impact people?

M/C: Our end goal of this film is first, to reach the parents, aunts, uncles, brothers, sisters, and others, that these kids lives depend on. Second, to reach the same kids that are being represented in this film to give them hope and pride. And of course third, is to reach the rest of the audience, LGBTQ and straight.

B: There are over 500,000 gay homeless kids on the street right now and new estimates say that 68% were kicked out or had to run because of what they faced at home for being gay. I know we see a lot about the percentage of gay youth on the streets on social media sites, but the reality of it doesn’t seem to register with people in the LGBTQ community unless they’ve actually lived it. Why do you think that is?

M/C: Great question. We both understand that unless you’ve actually lived it, it’s hard to relate to, doesn’t matter the circumstance, whether it relates to poverty, color, gender, etc. But the hope that they might understand comes when you read a letter from the mother of our teen actor who had refused to accept his gender, and how her perspective changed after seeing a few clips of our film.

B: You’re funding this independently. I’ve talked to a bunch of indie artists that have tried that route and almost all have spoken about how tough it is. What are your thoughts there?

M/C: It’s difficult but it’s not tough. All the people we have chosen to be a part of this film feel the same passion we do, and I might add… blind trust in us. We have refused offers from established Producers to work with us because it becomes a huge production and we want an intimate one. Cati: As a photographer I’ve always liked working in intimate close sets.

B: You’re still trying to fund the film? How can people help get this message out?

M/C: Mike: Yes. We’re now up the 85% of our goal to make this film so far. We are hoping to achieve the extra 15% between now and end of filming. But never the less, we’re going for it,  we’re beginning pre production on August 15th, and hoping to be finished filming by the 15th of October. We also have set up a fundraiser so that we can raise sufficient funds to cover for all pre and post production costs. And by spreading the word to others, we have a better chance of reaching more supporters. For those who are interested in giving a donation, can do so here by clicking on the link we’ve provided: http://prince-ekaj-the-movie.tumblr.com/

(Note from B: Mike & Cati are also donating $1 for every $20 raised to Cyndi Lauper’s FortytoNone project that helps homeless LGBT youth.)

B: Any idea about a release date and when people will be able to see Prince & Ekaj?