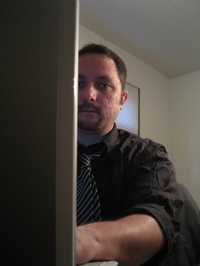 I’m talking with J. Warren today, author of Stealing Ganymede which was a 2009 Indie Book Award Finalist. Like my own books, Ganymede is a harsh fictional look at a disturbing subject matter and one I would recommend for your reading list.

B: I love authors that push buttons, and obviously with Ganymede you are one of those authors.  Can you give me a little background as to what brought you to write about child prostitution?

J: Through blogging, prior to Facebook, I met a young man who had been horribly abused his whole life. There was a child prostitution (and worse) ring active the area where he lived, so it didn’t take long for them to get their hands on him. He was able to survive and make it to adulthood and eventual safety, and in the course of our talks, he revealed a lot to me about the world I thought I knew. I was outraged at what I learned, so I started to do some research. The more I learned, the more I knew something had to be done.

This was all happening around the same time as I was learning that almost all of my gay male friends had been sexually assaulted during their lives, most as children.

I already knew about the Steven Stayner case at the time, but then I learned about the Johnny Gosch case. The Shawn Hornbeck case broke after the novel was already out, but it was a major inspiration for the books that come later in the trilogy.

So, the more I learned, the angrier I got. I felt that people needed to know these kinds of things were happening around them. The young man that I met asked me not to tell his story, though, which was fair. After all, it’s his story to tell. So, I used Greco-Roman myth to metaphorically tell the story. The Zeus of mythology comes from an abusive home, and becomes a serial rapist. The only mortal he doesn’t rape is Ganymede, who also happens to be one of the very few males that Zeus ever abducts. All the mythology mentions that Ganymede is young when Zeus abducts him, and so it all came together very quickly.

I’d read an interview with Chuck Palahniuk where he said to write a character that disgusts you, and I thought that someone who abducts children is pretty much the most disgusting thing I could think of. From there, it was just a matter of figuring out why my character would abduct Ganymede but not rape him.

B: We were talking across Twitter a few weeks back and you made a comment that some people in the LGBT community don’t believe that survival prostitution is a part of what LGBTQ youth face. I know that opinion is a load of BS, but where do you think those kind of statements come from?

J: I think there’s a desire to see the beautiful sufferer, to coin a bad phrase. It seems to me that people often want to see the virginal gay youth suffer stoically through abuse, but they don’t want to see that same young person have survival sex, be it for pay or otherwise. For some people, that seems too active, too much like colluding with the enemy. I can’t remember the article, but a survivor once said that the question he knew people were dying to ask, but couldn’t bring themselves to, was whether or not he enjoyed the sex. He said he never answered because he knew that would change how they perceived him. I think that in America right now, if you write a book about a child who suffers sexual abuse and eventually gets free, that’s beautiful. But if you write a book about a child who has to use their body to survive, that tears at our idea of the stoic victim. No one wants that. Our ideas of what it means to be victimized and what it takes to survive in those situations have to change, and this includes educating book reviewers.

B: Another author friend of mine suggested that a lot of LGBTQ people just don’t know this world and have a very hard time conceptualizing the reality of it. With 500,000 LGBTQ homeless kids on the street I find that somewhat hard to digest. Do you think that our community really doesn’t know, or is it also some measure of avoidance on their part?

J: Avoidance. I think the situation we face daily in this country, this world, is horrific, and just to get through the day, most of us have to practice some kind of projection into a mental ‘other’ world. The fact that we do it well enough to get through the day is great, but the downside is that sometimes LGBTQ people wind up more naïve about their situation than straight people.

B: One of the first paragraphs in your book seemed to hit the whole issue right on the head: Skin and bone simply disappear and no one pays any attention. It happens about a thousand times a day all over the world. That’s a pretty powerful and true statement.

J: Zeus feels that because he’s not only seen it happen, he’s made some people disappear, so he knows just how easy it is. I imagine you hear this from people who work with LGBTQ youth, too…just how easy it is for people to simply disappear because the rest of us have other things we’re concentrating on. It gets pretty easy to lose track of the ball day to day, and there are predators that take advantage of that. Who not only circle, waiting for someone to slip close enough to the boundary to disappear, but also make situations where it is possible to disappear someone. In the Johnny Gosch case, it looks like there was a vast group of people who used Boystown, a place where youth were already in a liminal space, to disappear their victims.

I started to notice these spaces more and more as I talked to the young man I met—the way that we move through places and situations day to day and don’t notice the potential boundaries. It got to the point where friends started to say to me, “not every person you see is being abducted or raped.” My response was always that it was happening all around them, and that the very attitude they’d just spoken was what allowed it to happen. We walk past LGBTQ youth every day and we keep pretending that the kid on the corner is just waiting for his mom to come pick him up, or that the young girl who seems troubled in the coffee shop is just suffering through some breakup with her boyfriend. We don’t like to think about all the other things that could be happening to them.

B: Well said. I wrote a post about that very same thing some time back. Do you have any new projects or books you’re working on? Tell us a little about it, when it’s due out and what we should expect.

J: Rebel Satori is working on the second book in the trilogy, which picks up Jacob (one of the minor characters) a few years after the end of the last chapter of Stealing Ganymede, so it should be out soonish. The third and final book, which catches up with Jacob as an adult, is done and out to my beta readers right now. I’m hoping to get that back by month’s end so I can use August to edit. I’ve started another project, but I’m keeping it pretty close to my chest right now. At some point, you and I need to write something together, like John Green and David Levithan’s Will Grayson, Will Grayson.

B: Thanks for the offer! We’ll have to look into that, and thanks for stopping by. Next week I have author Gregory G. Allen on the blog and author Nephylim the following week.

You can find J. Warren on his website, Twitter and find his books on Amazon (print or ebook) and at Barnes & Noble.