You are here: Home / Author Interviews / When gay fiction becomes a personal journey 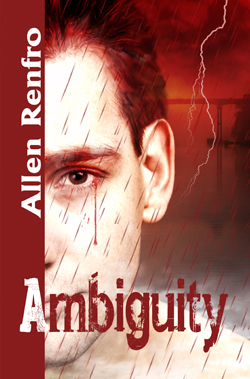 If you’ve read any of my work you are very much aware that my characters often wrestle with the centuries old conflict between religion and sexuality. In my novel Ambiguity, this conflict erupts into all out war. I wanted to explore the horrors of religious hatred toward homosexuality and also show the repercussions on both sides of this hatred. I wrote Ambiguity more for myself than anyone else. I needed to delve into my own experiences with religion, to understand my own mistrust of people who claim religion as their sole purpose for condemning homosexuality. In my own cynicism I wanted to show that many times people use religion to hide behind, to cover up their own secrets. There are many closets to hide in and come out of.

For Ambiguity I decided to take beloved characters from my novel Bridge Water and put them in the center of this battle between religion and sexuality in a stand-alone novel. The story starts with a birthday celebration for Erik Layton (aka Laylay). Derek Cooper, an openly gay detective who is dating another detective, Will Jones, has taken Laylay and close friends to Knoxville’s most popular gay dance club. When the club is its most crowded and the birthday celebration is at its peak Derek notices a man in the corner of his eye, armed with guns and grenades. The man opens fire.

As with any fictional novel the mystery that evolves is more than just a mass shooting. While the motive that leads to the deaths of 42 victims and the wounding of 106 others becomes the centerpiece of the story I still wanted to have an emotional debate between characters that are religious and characters that are gay. I set the story in the city I live in, Knoxville, Tennessee, a southern city, because I believe in the south we have the most extreme in religious anti-gay views. That’s not to say Knoxville is an anti-gay city. It’s not. We have a wonderful, supportive mayor who marched in the pride parade the first year of her term and just this past year I counted six churches with representatives marching in our pride parade. But the state of Tennessee as a whole is an anti-gay state, lacking in education and understanding where every anti-gay sentiment is always intermingled with biblical references. And as the LGBT community moves closer and closer to legal equality my fear is that religious extremists will resort to violence just as in the civil rights movement of the 1960s. That fear is reflected in my novel Ambiguity.

I think the fallout from the mass shooting that leads to soul searching for each character is reflected in my own life; from experiencing anti-gay religious leaders who claim to be persecuted victims to the actual victims and their families trying to pick up the pieces of their lives after a tragic event. I really wanted to show all sides of the story. Ambiguity has a ripple effect that pulls all the characters in. At the end of the day no character comes out unscathed.  I think the debate between Laura, whose husband is killed in the shooting, and Erik Layton, a gay man who plays piano for several churches, is the most important aspect of Ambiguity. Of all the characters it is Erik (aka Laylay) who suffers the most; the sweet man with a tremendous sense of humor forced to acknowledge the polar opposites of his own personal beliefs in God and the hatred spewed by his religion.

Ambiguity is a personal journey for me. It’s my own exploration of how I feel about religion and how it is interpreted to justify ostracizing me from society. I think every gay person who reads Ambiguity sees something in their own lives. My greatest wish is that when a person finishes reading Ambiguity they feel that there is hope, America is changing and we will all be treated fairly and equally. Twenty-five years ago equality was merely a dream. Today, equality is closer than ever to becoming reality!

Allen Renfro makes his home in Knoxville, Tennessee and is a native Tennessean. A graduate of Tusculum College, he frequently appeared in the small press and underground zines of the early to mid 1990s as a writer and artist. He is the author of five novels. His sixth novel, Superstitious, is scheduled for release in January 2015.