You are here: Home / Brandon's Musings / The Value of Rain – Year One 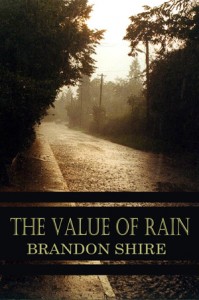 Who would have thought we’d be sitting here one year later? Not me that’s for sure.  As most of my regular readers know I was prodded into publishing by some of my few, but very close, friends. J.S., who you met on my social sites while I was away, simply chuckles at this because he was one of those people.  He’s the one that dug through manuscripts saying What about this one?  Or Do you remember that one you wrote about…?

I specifically recall the conversation we had about dipping my toe into this publishing pond. How adamant I was about my own privacy, the lack of time I had to devote to it, and a million other excuses; anything I could think of that would take this ridiculous idea from his head. I know I told him that I had never allowed him to read my writing for this.  And of course his question was Why did you then?  I was stumped, my tongue a rogue little knot that could not find an excuse. Damned thing.

So here we are one year later. The anniversary of the release of The Value of Rain. Frankly, Dear Readers, this is all your fault. You see, I gave JS the hardest book I had written, the one that held the most anger, the most angst. It was a twisted but fictionalized record of an utterly debilitating moment in my life when I sat down and listened to the atrocities pour from the souls of men who had lived through some of what you find in Rain. The rejection, the abuse, the institutionalization for being gay was based on real people. All but one of whom are now dead.

I thought you would hate Rain, that was the reason I gave JS the manuscript. I told myself even with the style of prose, they will wilt under its weight and I can go on writing without him bothering me again. You, Dear Readers, foiled my plan. Indie book bloggers picked it out as one of the Best in LGBTQ Fiction of 2011 and a Top Read of 2011.  I have received emails and praise from all over the globe and private notes about how much the book touched people. I was shocked. You weren’t supposed to do that. (Didn’t you get the memo?)

Instead of animus and rejection I got requests for more. JS laughed like a maniac. See I told you. He is still laughing. (Do-gooders just annoy sometimes, don’t they?)

Did you know that I used to apologize for the angst when Rain first came out? Yup. JS put an end to that  too. He asked me why I was doing it. Again I had no answer. He made me think, made me ask myself why with 2000 years of brutality, abuse, and hatred directed at the LGBT community we should be the people apologizing for being pissed off about it. Of course he was right. So I stopped apologizing, for Rain and Dust, both of which are but simple reflections of the consequences that verbal homophobia turns into when left unchecked.

If I have offended you with my words, hurt your feelings, made you weep out in public or sitting at your computer, I am not sorry. Not anymore. Not when I still see headlines about gay men and women being murdered and mutilated, not when kids are  killing themselves over something over which they have no control; and definitely not when children are being beaten and murdered by adults for daring to say that they are gay. I don’t expect that my writing will change how people hate. I don’t think any book can do that, not even the great religious tomes. Religion has never ended a war, it has only started them. But it is my hope that my meager words will make you truly understand how much homophobia devalues a person, how deep the wounds etch themselves and how hard the consequences are when we do not raise our voice against it.

Thank you all for your response to Rain, for the money we have raised getting LGBTQ kids off the street, and for your continued support. I am very, very grateful. I also want to say a very hearty thank you to all the LGBTQ authors that have spread the word about the book and continue to do so. Without you the beauty of these men and the violence they suffered would be forgotten.

Go here, get involved, and make a difference  in your own town.