Unfortunately, I never made love in a cave during a tornado, but the story does reflect my feelings of having to hide and run away when I was a teen in Arkansas. I was raised in the Church of Christ, a fundamentalist sect that thought Baptists were liberal sinners who would burn in hell. My parents are both very nice, caring people, but at the same time, they had a strong belief system that made growing up for me very painful at times.  The obsession the narrator feels for his boyfriend was inspired by how I felt for the first man I fell in love with.  He was straight.  I’m long over him now, and we’re still friends, but I can still remember how hungry I was for everything about him. I’ve loved other men better than I loved him, but there’s nothing like your first. 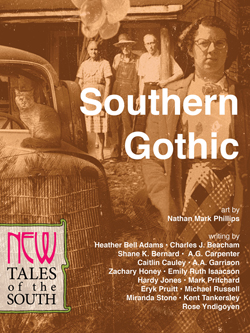 “Long Finger from the Sky” makes some strong statements about homosexuality and religion. Why was it important for you to write about this subject matter?

Talking about both subjects seems to come naturally to me. I’ve been an atheist since I was 17, but religion and its effect on people continues to fascinate me.  By no means do I intend to attack all religious people; my husband is Episcopalian, and many great leaders and artists have taken positive inspiration from religion. But at the same time, religion has hurt a lot of people and held us back as a species, and I feel compelled to talk about that. I’m gay, and even though things are getting much better, at least in the West, I don’t think the wider culture is yet comfortable with us talking honestly and directly about our lives and loves, so to get people used to us, we have to tell our stories. Also, it’s fun, even though I can be a terrible procrastinator.

Those of us in the more forward-looking parts of the world are very lucky to be living at this time, when we can finally breathe free and be ourselves.  At the same time, we have to fight for our brothers and sisters in Russia, Uganda and elsewhere. The LGBT activists in those countries are the embodiment of courage.

Gay fiction is often set apart as its own genre. But in this anthology, Southern Gothic is the genre and your story is just one among many. Do you feel, as a gay writer, that you have a certain responsibility to represent your community in the literary world? How does that motivate you to write?

That sense of responsibility can lead to a paralysis of analysis. It makes sense to be wary of perpetuating negative stereotypes, and I think the best way to avoid that is to create fully-blooded, contradictory characters who seem real.  The many demeaning antigay ciphers we’ve had to endure in books, movies and the rest of our culture have always been flat, poorly-imagined creations. But the most interesting literary characters are not role models.  Medea is a magnificently cruel and awful character. More recently, the title character in Sapphire’s The Kid does some horrific things, but we the readers can understand what he’s going through.

From your perspective as a southern, gay male, how do you think people outside the south view this region of America?

I think there’s a lot of bewilderment and condescension toward the south, in addition to some well-deserved outrage, such as the many reasonable people who can’t believe that George Zimmerman was found not guilty of murdering Trayvon Martin. I wouldn’t say that people from other regions view the South in any one way, as I’ve heard many contradictory opinions, sometimes from the same person.  But yes, the barefoot, backwoods, cousin-marrying stereotype does endure, alongside images of southern hospitality.

Do you feel the south gets a bad rap? What are some positive qualities you think are important for people to know about the south?

That’s a complicated question. In some ways, it does get a bad rap, because there are a lot of snobbish people out there who love to throw the term “white trash” around. On the other hand, to the extent that the South has fought against civil rights, basic human dignity, science and knowledge, it does deserve the bad rap it gets.

As for positive qualities, Southern people who aren’t prejudiced are often extraordinarily friendly and caring. People will often greet total strangers with a big, sincere smile and tell their life story.  I have a lot of fond childhood memories of exploring forests and quarries by myself.  And [in the summer], I really miss farm fresh watermelon from Cave City, Arkansas. Those delicious things are huge.

Who are some influential southern authors to you?

Zora Neale Hurston is a strong favorite. I love her energy, humanity and earthy humor. She superbly captured one southern variation of African-American vernacular without being the slightest bit condescending or exoticizing.  One aspect I used in my novel was how she dove deep into slang but didn’t use any of that cutesy “chile” spelling which suggests that black folks don’t talk right.

You currently have two books available for Kindle. Can you tell us more about these and why/how they are different from “Long Finger from the Sky?”

My novel First Floor on Fire was inspired by what I saw of my students’ lives when I taught English in a rough inner city high school in Philadelphia.  Many of my kids had incredibly difficult and painful lives, much worse than anything I had to endure growing up, and for my novel, I wanted to step outside of myself and tell what I saw as some of their stories as honestly as possible.  The result turned out rougher and more primal than I realized while I was writing. When I take a look at any of it, I tend to think, “That came out of me?!”  I’m especially happy with how vividly I realized my central character.  Nevaya is a very razor-edged, troubled, sometimes destructive young woman, and yet I think I made her sympathetic.   A couple of my former students have told me I got it right, which means a lot to me.

Next, I wrote and illustrated a children’s book, I Don’t Fit, so I’m a marketing nightmare. It’s as if Sapphire followed up Push with Where the Wild Things Are. But I am proud of how different my two books are from each other. First Floor is a furiously angry 21st-century Greek tragedy, while Fit has a scene in which I drew my husband as a flying cat man swooping through the sky as whales ride bicycles in the background.  Even so, Fit passionately advocates for misfits in its story of a rejected half-bear/half-dragon thrown out of his home and befriending a big girl snake with two feet.

You have recently gotten married. Congratulations.  How does it feel to be living the “American Dream?”

Thank you. I’m lucky to have found such a wonderful, supportive husband. And Jason’s as silly as I am. I’m not saying that everyone should get married, but for us, it feels great. I love walking around New England holding hands with the man I love. Yes, I’m completely nauseating; I even love listening to my hubby snore.  And he puts up with my Doctor Who obsession, which does border on madness.

What are your hopes for your future as a writer?

Next up, I’m working on another children’s story, Leopard and Mouse: Cats Fight Dinosaurs. After that, I have in mind a sort of sci-fi semi-fictional memoir called Indigo Snakes Are Flying.  I hope enough people notice me and buy my books that I can make creating more books my full-time job, though I’m realistic enough to realize that very few writers get that lucky.  Knowing that I’ve been able to reach other people with my stories means a lot to me.

Southern Gothic: New Tales of the South is available as both an eBook and special print edition from New Lit Salon Press. For more details check out www.newlitsalonpress.com