You are here: Home / Gay Fiction / Spotlight on Gay Fantasy – Dark Tale of Randamoor the Recluse

In a nutshell, if you’re looking to fall hopelessly in love with a gay 17-year-old who wields a sword, this is your series. There are 7 books in total. The first part of the 7 book series (Dark Tale of Randamoor the Recluse) is a trilogy called The Invisible Chains. The second part of the series is 4 books: The Invisible Hands. I’ve only featured book one here to get you started on this epic journey. Enjoy! 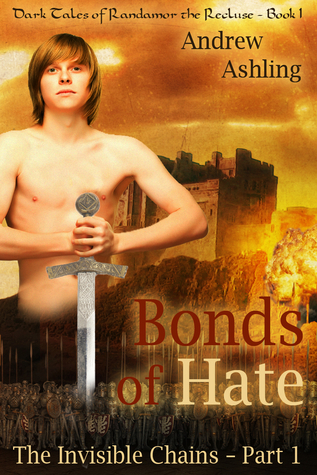 You will hate him… if your heart isn’t big enough.

While the kingdom of Ximerion is threatened at its southern border by a major power, the high king sends his two youngest sons, the half brothers Anaxantis and Ehandar, as Lord Governors to the Northern Marches where minor raids by wild barbarians are expected. Under the guidance of an old and trusted general, the king hopes to keep the young princes far from the major conflict in the south, while at the same time providing them with a valuable learning experience. The estranged half brothers are rivals, but soon they feel attracted to each other. As if this was not enough of a complication, they begin to suspect that they were set up by their own father. The result is a fierce struggle for power where the lines between hate and love become almost indistinguishable and where nothing is what it seems.

Get it FREE from Amazon

Andrew Ashling started writing in January 2009, mainly gay, m/m, slash, and yaoi stories. He has no great literary ambitions. He just tells great stories that play with expectations, boundaries, and even taboos. Connect with him on Twitter.