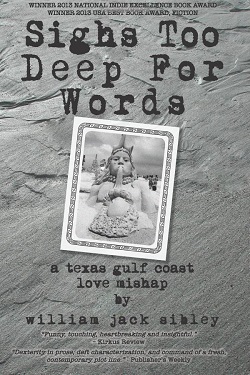 I won’t bore you, dear reader, with the details of how I went from New York publisher Kensington producing my first novel “ANY KIND OF LUCK” to then doing the second one entirely by myself except to say that Kensington wanted a repeat “serial” of the first book and I, after ultra brief consideration, graciously declined.  I’d already said what I’d wanted to say on the subject.  I waited nine months for Dutton to then determine if I was worthy enough for their illustrious imprint (I wasn’t!).  And then it was off to the salt mine hell of small, Indie publishing houses. I had to pull the book from one persistently mendacious publisher, got dropped by another for daring to question their imperial supremacy (and such unmitigated joy all for virtually zero money.) I finally ended up sticking the galleys in my desk drawer and sternly ignored the muffled whimpering emanating forthwith for several years before having a head-slapping, V8 moment. Self-publish and be damned!

The big fear is that I wouldn’t have the brilliant editorial input I’d received from Kensington.  Wrong.  I had TWO editors at CreateSpace; equally sharp, equally insightful – both wizards of paring fat and keeping the wheels on. A very rewarding experience.  And there is indeed a “just rewards” God! SIGHS TOO DEEP FOR WORDS was a Finalist for three National Book Awards (LAMBDA LITERARY, 2013 General Fiction; FOREWORD REVIEWS, 2012 Book of the Year; and the 2013 BALCONES FICTION PRIZE) and won two (2013 INDIE EXCELLENCE, Winner Gay and Lesbian Fiction; and 2013 USA BEST BOOK AWARDS, Winner Gay and Lesbian Fiction.)

From KIRKUS REVIEWS,  – Sibley blends skillful storytelling with a sharp insight into human nature in this darkly humorous, intricately plotted tale of a prison inmate who, through years of correspondence, falls in love with a woman he has never met – a woman who turns out not only to be a gay man, but a closeted gay minister.  Readers looking for an entertaining book with surprising touches of depth and emotion are sure to enjoy this fresh, dramatic tale.  Funny, touching, heartbreaking and insightful.”

From PUBLISHERS WEEKLY, – ‘A whirlwind of colorful characters populates Sibley’s well-crafted novel … Sibley demonstrates dexterity in prose, deft characterization, and command of a fresh, contemporary plot line about redemption and starting over that entertains with feel-good appeal.”
Moral of the tale?  It’s 2014 – don’t let the big boys push you around anymore.  If you think you’ve got something of quality to put into the zeitgeist then by all means, carry on!  Think you can’t get a book published?  Think again.  Indeed, writing is all too frequently Sisyphus grunt work of trudging up the hill with your masterpiece boulder of creativity bowing your head.  “True writing” (not letter-writing, not diary writing, not tweeting, not texting and not emailing) is nearly always some form of self-disciplined exertion. Accept the provocation with determination and forbearance. To the steadfast gardener go the bouquets!
SIGHS TOO DEEP FOR WORDS – Available at Amazon.com, Barnesandnoble.com, and all Independent booksellers everywhere!