You are here: Home / Author Interviews / Queering the Beyond with Adam Sass

With the creation of new worlds, aliens, and inter-galactic politics one would think that science fiction is a literary genre welcoming of diversity. However, both queer and female voices in sci-fi are often either hard-to-find or snubbed by the genre’s readers. Startling Sci-Fi: New Tales of the Beyond edited by Casey Ellis (New Lit Salon Press) is inclusive of both queer and female voices. The collection also attempts to disprove the misnomer that “literary fiction” and “genre fiction” can’t be one in the same. I sat down with one of the anthologies authors, Adam Sass, to find out how he’s helping to queer the beyond. 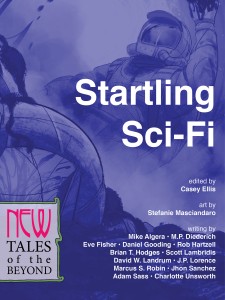 Brandon: Why do you think Science Fiction attracts so many gay readers and writers?

Adam: It has a flair, doesn’t it? Sci-fi writing lends itself to splashy, showy, larger-than-life characters. It colors the mundane, presents big ideas, creates fabulous powers, and features operatic drama; all things gays (on average) find to be mother’s milk. It’s also a genre that’s big on metaphor. Gays can really rock a metaphor.

Brandon: Pop culture plays a big role in your story, “98% Graves.” Can you discuss pop culture’s influence on your work in general and in this story specifically?

Adam: “98% Graves” plays with a pop culture phenomenon I think is fascinating, which is our feeling of ownership over celebrities. Celebrities we love become friends to us; something between a friend and a pet. We imprint a relationship onto their image, which is really the whole point of movie stars/celebrities. When the characters in this story live the life of icons, it takes that imprinting to a deeper, more dangerous level. They can’t conceive that there’s a real person running around out there that doesn’t fit into their fantasy. I love pop culture—I’m steeped in it. Even when I’m writing sci-fi, I want the stories to feel part of the real world, and the best anchor for that is to color it with little signposts: a pop song here, a movie reference there.

Brandon: Your story takes a critical look at virtual reality and, in a sense, what is happening to humanity. What made your focus on this topic? 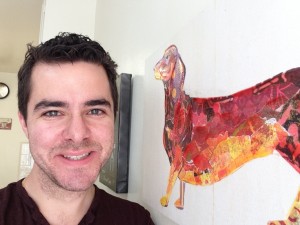 Adam: I was online talking to one of my Gay Twitter Friends, as I always am, and after awhile I realized I’d never seen his real face. He frequently changes his profile pic and Twitter name to a different diva actress or TV character. I will often respond to someone with a pic or a gif instead of text (and that pic is always of Angela Lansbury or Christine Baranski or the like). I can more easily express myself online in an Angela Lansbury GIF than I can interact with someone in real life. That idea made me crazy. I think a lot of gay men feel the same. So, that was the start of “98% Graves,” a place where gay men were more at home as dead divas than in clubs as themselves. So, in a way, I don’t really see it as a critical look. I love technology; I think it’s a bringer-together, but we need to be careful. The characters in this story are brought closer by virtual reality—too much of it leads to trouble, but in the end these guys are finally able to talk.

Brandon: Art has always been an important part of science fiction. Each of the stories in Startling Sci-Fi has its own unique artwork by Stefanie Masciandaro. How do you feel about the art that was created for your story? Does it enhance your vision? 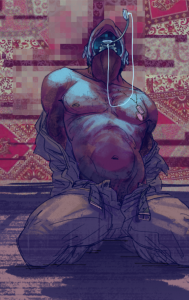 Adam: Stefanie Masciandaro has made these stories live! I adore her artwork for “Graves.” I mean she nailed the tone of “Sex robot strips down and then a phone comes out of his face.” It makes me want to go back and write more of that scene. It’s at this intersection of sexy and horrific, and those uncomfortable little corners of the mind are where I love to live.

Brandon: “98% Graves” received Honorable Mention in the Pop Culture Science Fiction category for Writers Digest before it was even published. Can you tell us what prompted you to submit to that contest and what winning honorable mention means to you?

Brian Centrone (of New Lit Salon Press, publisher of the anthology that includes my story) pointed me in that direction. They really believed in this gay weirdo chestnut—the short story, not me—and when the response came back so positive, it made me even more grateful to be a part of this anthology. All these stories are so special; I can’t wait for readers to get their hands on them!

Brandon: You recently got married. Congratulations! As a resident of California, did you ever feel as if your right to marry the man you loved would be realized during the entire span of Prop 8, or has science fiction taught you that the future has infinite possibilities?

Adam: Thank you! Oddly, I never once worried about that. I have kind of a silly, blind faith in people that I probably shouldn’t talk about too openly. Sci-fi most certainly has a part to play in that optimism. Science fiction/fantasy stories are usually about coming together in a crisis, and for me there’s nothing better than that (in fiction and in real life). I campaigned for “No on 8” in 2008 so that initial loss was grim. Gay couples in California were dealing with much worse than I was at the time. I was single, and the Prop 8 loss for some of these couples meant houses and kids and health insurances up in the air. That’s way scarier than “ugh, I’m singllllle.” I had a lucky go of it. When I met my husband in 2011, and later when we got engaged, the engine was going-going-going in our direction.

Brandon: Christopher Rice gave you a huge shout-out on Twitter. Can you tell us what that was about?

Adam: Haha, well cards on the table, I got a retweet from him, and we all know the chant: “Retweets are not endorsements.” Really, I’d written a blog post about his debut novel, A Density of Souls. It came out right around the thick of my own coming out; my high school girlfriend (who was a saint) gave me a copy of this book, which I knew enough of to know it was a “gay book.” It terrified me just to have it, but I couldn’t get rid of it. I didn’t read it for months. But when I did, it was like taking a gigantic step towards the closet door. That’s why it’s important gay writers write gay books that can be called “gay books.” They need to find closeted gay boys and scare them out. Rice was doing the Lord’s Work there.

Brandon: Speaking of Twitter, you are big into social media. Aside from your very active Twitter presence, you also keep a regular blog. Talk to us about that.

Adam: StayOnFountain.com is a multimedia blog I started in 2009 when I went to Cleve Jones’s National Equality March in D.C. For years, it featured daily content focused on taking a humorous, Joe Schmoe look at the ins and outs of gay politics, which is often so baffling. In the last year, when I turned to writing fiction, I refocused on gays in entertainment and more monthly updates. Now I post weekly for the fabulous people at GeeksOut.org.

Brandon: You don’t just post for GeeksOut.org, you are a member! What has it been like being a part of that great community? Can you share a little about what made you join?

Adam: Ian Carlos Crawford, my super marvelous friend from The Gay Twitter, went out of his way to get me work. He’s the hardest working guy out there, and he has his fingers in a lot of different website pies, but Geeks Out (where Ian is a contributor and social media director) was exactly the work I’d been doing on my personal blog. Except this was collaborative—my dream! My blog was just me, with a rare occasional guest post. Writing is lonely enough. The blank page is scary enough. I’m relieved to find a place where I’m not alone, and if I don’t write one day, other people’s words will still be there.

Brandon: Startling Sci-Fi attempts to address the misnomer that genre fiction and literary fiction can’t coincide. What do you make of the assumption that genre writing such as sci-fi can’t be literature and vice versa?

Adam: Any words that are written down on a page with the intention of reaching some audience are literature. The deeper meaning of a piece is entirely up to the skill of the writer and—most importantly—the mind of the reader. Genre writing succeeds more often commercially because of Clarity of Intention. The genre writer intends (by the nature of the genre) a very specific effect with their work, and readers respond to that. Horror writers intend to scare. Mystery writers intend to intrigue. A sci-fi writer intends to present a Big Idea, whether that’s a new world or a new way of looking at things. The very best literature writing occurs when the writer has a crystal clear intention. Too often, writers start with the intention of “I want people to know what a big shot I am.” I probably sound like a bumpkin, but there you go.

Brandon: On May 16th you will be part of Startling Sci-Fi: Literature, Genre Fiction, & Beyond, a panel consisting of several authors and the artist behind Startling Sci-Fi. What do you hope to bring to the conversation about the inclusion of gay voices in science fiction?

Adam: I cannot wait to be on this panel! My hope is to highlight the need for diversity in sci-fi. This genre is typically the tip of the diversity spear, but people have no idea how hard it is still to find LGBT characters (let alone LGBT characters of color) in genre fiction. I want straight writers, especially straight white ones, to know that they can write about us even if it’s not their exact lived experience—it doesn’t have to be revolutionary. We’re sci-fi writers for goodness sake! Use your imagination!

Brandon: What’s next for Adam Sass?

Adam: My first novel! It’s LGBT and sci-fi (because of course) that’s basically Carrie at an ex-gay camp. It’s gay heroes, gay villains, gay sidekicks, gay henchmen, gay wise old mentors; it’s everything I want to be reading but no one is writing. So, right now I’m trying to lure in an agent who can love these oddballs and set them on the path to publication. I’m also obsessed with murder mysteries; wouldn’t it be great to have a mother/gay son detective team? Great/insufferable?

Brandon: Yes. Yes it would be.

Startling Sci-Fi: New Tales of the Beyond is available in eBook and print editions from Amazon.com as well as other online retailers.