I originally posted this on Chick n Dicks (they’re generous enough to invite me around once in a while) when they were doing an Ordinary Hero’s segment for the month of February. In light of the president’s endorsement yesterday and the fact that I personally believe that gay couples CAN change people’s misconceptions just by being who they are, I have re-posted it again here, with a few edits for SFW reading. 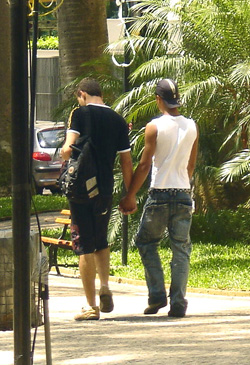 Let’s face it, we like our escapist reading. We love the hot swarthy men who jump into the fray, take down the bad guys with claws, fangs and superpowers; and it’s even better when they’re having really hot m/m sex right after. (Got to burn off all that adrenaline somehow!)

I read a lot of different genres and it always struck me that some of the most ordinary characters in the books were, in fact, the ones that had the most profound impact; the unsung heroes that allowed the main character his glory.

But that reflects in real life too, because it’s usually not the one in front of the podium that’s made the change in someone’s life. It’s the person you never hear of, the one that doesn’t do it for the glory, or the attention, or (let’s face it) the really hot sex. They do it because it’s right, because their heart says that there is more to being human than just taking.

It might be someone like that accountant you noticed but never really saw. You know the one pushing his pencil around all day, tapping at keys and making sure all the numbers are right. Then he goes home to his quiet life and…

Greg opened the door and it was silent, dead silent.  Usually there was a mad rush at him when he stepped in, but not today. “Steve?” he called out.

“In the kitchen,” came the reply before a rhythmic chopping noise began.

He looked around as he walked through the living room. Toys were scattered around the floor, one of Alistair’s shoes was poking out from under the couch and little Steven’s sock was folded neatly on the coffee table, but just one. He smiled, that kid was always losing socks and they could never figure out what he did with them.

He looked at big Steve when he walked in the kitchen, wondering when the hell they had become so domesticated.  The ring on his hand was still shiny, reflecting the ten years they had been together and a sudden public commitment that he hadn’t really been sure he’d wanted until they stood at the altar.  Then came the adoption and…. now he wouldn’t give it up any of it, even if it meant he had to fight the entire state legislature singlehandedly.

He came up behind Steve, slipped his arms around his waist and curled down into his neck for a nibble.  It had been so long since they had a quiet moment together. The thought of it made him frisky and he pushed himself against Steve.

“Mmm, I could get use to that kind of greeting,” Steve told him.

Steve opened his mouth, then stopped and closed it again before he spoke. “With Gerri…. and Margie.”

Greg stopped gnawing at his neck and pulled away. “Margie? Down the road Margie with the ‘we don’t think fags should be parents’ ideology?” he asked with a little heat in his voice. “Why would you even think that would be okay? She could be doing anything, telling them all kinds of disgusting things. I can’t believe you would do that,” he said as he grabbed his keys off the counter and turned to go get them.

“Greg, stop. Just listen. Okay? Then if you still think I made the wrong decision you can call Gerri and tell her to bring them back immediately.”

He turned and looked at Steve again, doubting anything he said about that woman would justify this.

“Gerri called this morning and said Margie wanted to come over to talk. You know how she’s like the neighborhood moderator? Of course I said no immediately, but she said it was important and she pretty much guaranteed that Margie wasn’t going to be pulling the Jesus thing that she did at the block party. So eventually, I said yes.”

He looked up at the ceiling, his eyes getting shiny; reminding Greg how emotional and protective he was about the kids; making him feel a bit deflated in his instant anger.

“She started crying,” Steve said with a long breath. “I mean crying, like bawling. Told me how sorry she was and…. it just went on for a while. It seems she had a change of heart and was worried about the damage she had done and… well, you get the idea. She just wanted to take the kids out for an ice cream and give us some time together as sort of a make up. And she is with Gerri and her kids too. I wouldn’t have let them go with her alone.”

“So she just walked away from her church for the two fags down the street?” Greg sneered.

“No,” Steve told him slowly. “But she did realize we weren’t the demons she was told we were.”

“And what gave her that revelation?” Greg demanded, throwing his hands out in complete skepticism.

“Actually, you did,” Steve said quietly. He smiled at Steven’s sudden blank face and moved around the counter to pull him into an embrace.  “Your comment about how the kids just wanted to be loved no matter what, you remember?”

Greg nodded without saying anything, his thunder was stolen and he knew it.

“Guess it did some work on her,” Steve said and grinned up at him. “You’re a hero, converting one bigot at a time.”

Greg looked down into his eyes and sighed loudly, “Sorry. I should know you wouldn’t put them in jeopardy. It’s just…”

Steve nodded. “I know, and I’ll let the lack of trust go, this time. Now how about that reward, hero?” he murmured as he pulled Greg tighter into his embrace.