Welcome Rick R. Reed to the blog. He’s here to talk to us about which of his books is his favorite, and why. 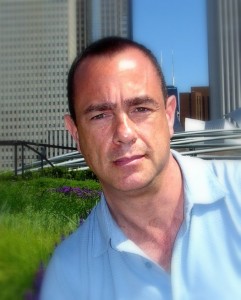 When you begin to lose track of how many books you’ve had published, it’s really hard to say which one is your favorite. It’s like asking Mrs. O’Farrell, a staunch Irish Catholic who lived next door to us when I was growing up which of her nine children was her favorite.

“They’re all my favorites,” I imagine her replying, “Each for a different reason.”

And the same holds true for me and my books. But today I am thinking about Chaser probably because its sequel Raining Men comes out on May 31. For its humor, its insight about body image (and the gay ideal or lack thereof), and its theme of attractiveness being a highly personal and relative thing, Chaser truly is, of my own stuff, one of my favorites.

Since its publication back in August of 2012, I’ve gotten many letters from readers thanking me for introducing a romantic hero who is not the ideal. See, the object of desire/affection in my story is Kevin and Kevin’s a little overweight. The “chaser” in the title refers to the gay lingo term for men who prefer their men on the meatier side: chubby chasers.

My other main character, Caden, is one of those men. Although Caden is a runner, with a lean and what some might call a perfect body, he prefers his men to have a little something to hold onto. 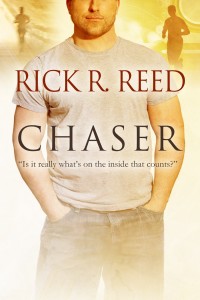 Here’s Caden’s first glimpse of Kevin in a bar one night:

Caden did have his eye on one guy, down on the lower level at one of the high-topped tables, talking with a couple of friends. He stood out because he was not built like most of the guys here, who were, to a man, either too skinny or too pumped up to register on his attraction meter.

This guy seemed comfortable in his own skin and Caden liked the way he threw back his head and laughed when one of his buddies said something funny. Unlike most of the other guys in Sidetrack that night, he did not show any signs that he was conscious of his appearance. Caden liked that he wore comfortable clothes, a cotton sweater of faded blue-gray and a simple pair of carpenter pants, most likely Carhartt. He peered over the rail and saw the guy’s feet were encased in work boots. Ah. A blue-collar man. A working guy. Just my type. Caden also liked his tousled blond hair, which revealed fetching layers of color that went from almost brown, to wheat, to pale blond, to nearly platinum, yet revealed no indication, Caden thought, of the attentions of a hairdresser. And what put him on the “edge of glory” was the crowning touch: a thick beard, not manicured into tortured geometric lines.

And he was blessedly overweight. Not fat. But a bit of gut protruded, and his thighs, in denim, looked like tree trunks. When he turned around, he revealed an ass of ample proportions, the kind Caden could just imagine as two perfect, creamy white spheres perfect for grasping and pulling apart.

“Is it hot in here?” Caden shouted in Bobby’s ear. He took a gulp of beer and fanned his hand in front of his face.

Most of the time, in gay or straight romance, you don’t find men like the one above. But in Chaser, I tried to show that objects of desire and/or love can and do come in all different shapes and sizes.

The vagaries of sexual attraction are definitely not a one-size-fits-all affair.

But if that was all there was to Chaser, there wouldn’t be much of a story, now would there? As an author, I like there to be some drama, some tension, so I asked… “What would happen if….”

…and filled in the blank with “Kevin lost the weight that drew Caden to him in the first place?”

So, when Caden has to leave town suddenly for an extended period, he returns home to a man who is not at all what he was originally drawn to. How does one deal with such a situation? As the tag line on the cover of Chaser wonders: “Is it really what’s on the inside that counts?” 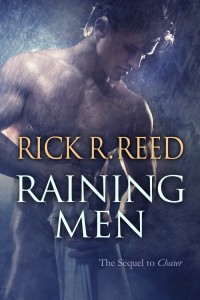 I think open-hearted people everywhere know the answer to that question, even if might be modified somewhat by “within limits”. But to find out if Kevin and Caden are still a love match when body images change, you have to read Chaser to discover what happens.

I leave you with a sentence near the end of the book that may give you a clue to how things turn out:

Caden turned back to Kevin. The fight had gone out of him. He appraised him with new eyes.

And what do you think he saw?

Chaser is available from Dreamspinner Press and at all the usual suspects—Amazon, Barnes and Noble, All Romance eBooks, and so on. And please watch for Raining Men, coming on May 31. It explores another side of gay life that may not be at the forefront of gay romance—sexual addiction and its power to thwart the very love for which one might search within its clutches.

Rick R. Reed is all about exploring the romantic entanglements of gay men in contemporary, realistic settings. While his stories often contain elements of suspense, mystery and the paranormal, his focus ultimately returns to the power of love. He is the author of dozens of published novels, novellas, and short stories. He is a three-time EPIC eBook Award winner (for Caregiver, Orientation and The Blue Moon Cafe). Lambda Literary Review has called him, “a writer that doesn’t disappoint.” Rick lives in Seattle with his husband and a very spoiled Boston terrier. He is forever “at work on another novel.”